In the face of growing support for the fight against the censorship of the Militant, Florida prison officials have rescinded the ban on five issues of the socialist newsweekly. All those who support the right of prisoners to read literature of their own choosing can use this victory to strengthen the fight to overturn the ban on eight other issues of the paper.

Issue nos. 24, 25, 26, 27 and 28 were banned solely because they included articles reporting on the censoring of previous issues of the Militant in Florida prison. Officials alleged that two of the issues encourage “activities which may lead to the use of physical violence or group disruption,” and all five issues present “a threat to the security, good order or discipline of the correctional system.”

The prison system’s Literature Review Committee upheld the bans on issue nos. 24, 25 and 26 before the Militant’s attorney, David Goldstein, had a chance to appeal the original impoundments by local prison wardens. In Florida, any warden can arbitrarily impound publications until they are reviewed by the committee. 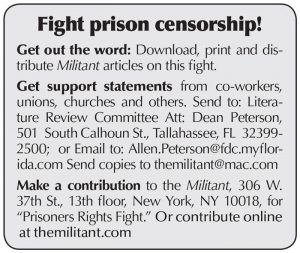 But as more letters opposing censorship arrived — a dozen new letters since Aug. 1 calling on Florida officials to cease the unconstitutional bans — the committee reversed course. On Aug. 19, they overturned their previous decision, without any explanation why they upheld the bans in the first place.

The Florida Press Association, which represents every major paper in the state, was one of the newest backers of the fight against censorship. The committee also received letters from prominent individuals in North Carolina, professors, and more than a dozen Walmart workers in Illinois.

They joined with others who have been backing the fight for months, including Amnesty International-USA, PEN America, the National Coalition Against Prison Censorship, the National Lawyers Guild, the American Civil Liberties Union-Florida, the American Library Association’s Office for Intellectual Freedom and many more.

The first ban on the Militant the review committee upheld this year was issue no. 15, which featured an article on the New York tour by Albert Woodfox, who spent 40 years in solitary confinement in Louisiana. He is campaigning to abolish solitary confinement. Most of the other issues were banned covering the fight against Florida prison censorship.

In a new twist the impoundment notice of issue no. 29 does not list a single offending article, in violation of the Department of Correction’s own rules. It makes the baseless claim that the paper “contains criminal history, offender registration, or other personal information about another inmate or offender.”

In addition to listing an article on censorship, the notice for issue no. 30 says “Page 7 Racist.” This is a bizarre charge since the only articles on the page dealing with racism point out the need for working people to overcome divisions, including opposition to race-baiting as well as scapegoating of immigrants, to effectively confront the crisis caused by capitalist rule.

In the paper’s latest appeal, Aug. 27, Goldstein notes that the true purpose for the impoundments is “to try to ban the Militant based on prison officials disagreement with its political and ideological views.”

Censorship “breeds resentment and often people draw the conclusion that these censored ideas must be in their interest,” Judy Ancel, executive producer of the Heartland Labor Forum, a weekly radio show in Kansas City, wrote the Literature Review Committee Aug. 27. She urged officials to let prisoners “have access to a broad range of literature.”

There are fights taking place against censorship in prisons in other states, including a successful effort to overturn decisions by officials at Danville Correctional Center in Illinois to remove some 200 books from the prison library that they deemed “racially motivated.” The titles included Harriet Beecher Stowe’s Uncle Tom’s Cabin and W.E.B. Du Bois’ The Souls of Black Folk.

“The end of the ban on five issues of the Militant is a big victory,” said Militant editor John Studer. “Now is the time to step up the effort to involve more organizations, prominent individuals and co-workers in sending letters to Florida prison authorities calling on them to lift all the bans. Every victory against prison censorship of the Militant will aid similar fights around the country.”