“It’s only by organizing a fighting workers’ movement and using union power that we can prevent the bosses from poisoning the air, water and soil,” Rachele Fruit, Socialist Workers Party candidate for Atlanta School Board, told Belinda Aycock who was attending a town hall meeting of several hundred in Covington, Georgia, Aug. 20. The meeting was held to discuss carcinogenic emissions coming from the BD Bard plant there.

“I think they should shut it down,” Aycock said.

“Yes, until it can be operated safely,” Fruit replied, “and workers there should be guaranteed full pay during the closure.”

BD Bard, which employs some 1,000 workers, is one of two plants that have been emitting ethylene oxide. The other is the Sterigenics plant in Smyrna, with about 30 workers, that sterilizes medical equipment.

Fruit and campaign supporters attended another town hall meeting of over 1,000 people in Cobb County to protest emissions from the Sterigenics facility Aug. 19.

Ethylene oxide is used in manufacturing other chemicals such as antifreeze and to sterilize medical equipment.

In 2016 the Environmental Protection Agency reclassified it as a carcinogen. Two years later it flagged areas in Georgia for elevated risks from exposure to ethylene oxide, but did not notify residents.

Since Georgia Health News and WebMD issued a report July 19 that emissions of the compound in these areas is way beyond what the EPA defines as “acceptable,” residents have organized protests calling for the plants to be shut down.

Denise Williams, an electrician attending the Covington meeting, told the SWP candidate that these plants should be closed. A previously unreported explosion and toxic gas leak in 2018 were revealed in the Aug. 27 Atlanta Journal-Constitution.

“Workers and unions can fight for workers control over production and safety to protect those on the job and in nearby communities,” Fruit said.

The SWP candidate told Williams how “black lung disease declined among miners more than 90% after they transformed their union in the late 1960s and ’70s and won more control over working conditions with the power to shut down production to enforce safety.”

She said, “Fights like these are a necessary first step along the road to building unions and a working-class movement that fights for all the oppressed and exploited.” Williams bought a Militant subscription.

Wils and CL member Ogmundur Jonsson were talking with working people there after the evacuation of 1,500 people when a dam containing 1.4 million tons of water from the nearby Toddbrook Reservoir suffered major damage Aug. 1.

“Whatever the exact reason for the dam’s failure, it’s the capitalists’ drive to cut corners to maximize their profits that is the cause of this,” Wils said. Kirkham purchased a copy of the Militant.

Other workers the CL members met described how working people looked out for each other after the evacuation order. “The first thing people did was knock on doors of elderly people who normally get home care,” student Anika Drews said. “A friend who lives in the evacuation zone came to live with me with her daughter and cat.”

Jonsson described how working-class solidarity gets extended on a massive scale as working people engage in revolutionary struggle and fight to establish their own government. He pointed to the example of the Cuban Revolution where the government mobilizes working people to get everybody out of harms way and into shelters with adequate provisions when hurricanes hit the island. “Then they mobilize volunteer construction brigades to help in the cleanup and rebuilding effort, with cheap or free construction material,” he said. To learn more, Drews signed up for a subscription to the Militant.

Janice Lynn in Atlanta contributed to this article. 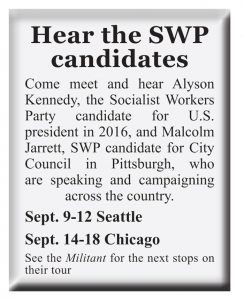