SEATTLE — “We are seeing important examples of workers organizing to fight to change their conditions on the job. This is a change,” explained Alyson Kennedy, to nearly 40 people at a Socialist Workers Party campaign rally in Seattle Sept. 13. Kennedy, the party’s presidential candidate in 2016, and Malcolm Jarrett, its candidate for Pittsburgh City Council, began a monthlong national tour in the Northwest.

“Many of these workers don’t have a union, but they organize themselves, take a stand and in the process get solidarity and gain confidence,” said Kennedy, a Walmart worker. She pointed to the fight by Blackjewel coal miners to get back pay stolen from them after the company declared bankruptcy.

She described how “lights went out at a Walmart store in San Leandro, California, and bosses gave out headlamps, telling everyone to keep working. But a number of workers refused to work in unsafe conditions and went home. And they returned to work the next day, not fired.”

Kennedy pointed to a headline “The World’s Wealthiest Family Gets $4 Million Richer Every Hour” that appeared on the Bloomberg News website, describing the Walton family, the owners of Walmart. The article says the world’s 25 richest families have 24% more wealth today than they did last year.

“These wealthy capitalist families have a whole layer of upper middle-class lawyers, college professors, politicians and professionals,” Kennedy noted, “who justify this set up, by saying ‘we’re rich too, because like them we’re smart.’”

“There has been a slowdown in the world capitalist economy for sometime,” Kennedy told the rally. “And direct assaults on workers will increase as economic conditions worsen.”

In the face of this she explained the SWP puts forward a program that begins, “Support workers’ struggles to organize to defend themselves, to use union power on behalf of ourselves and all working people.”

Kennedy and Jarrett had a lunchtime meeting with Walmart workers Pat Scott and Tanae Hitchye. They were interested to hear about the response of workers at the San Leandro store to the bosses demands that they work in dangerous conditions and to discuss the campaign program presented by the socialist candidates. During their discussion, when Jarrett described what had been conquered by the civil rights movement, Hitchye remarked that African Americans face less racism today.

In his presentation to the rally Jarrett pointed out that many liberals write off the working class as bigoted. “They say that all Caucasians are racist and that it is in their DNA,” he said. Such arguments obscure the fact that racism is used by the capitalist rulers to divide working people and intensify competition.

“The African American nationality was forged in struggle,” Jarrett explained, including through the U.S. Civil War, the mass movement for civil rights that overturned segregation and countless other working-class battles. “It will be in the forefront of future working-class struggles,” he added.

Kennedy pointed to struggles by working people this year in different parts of the world where mobilizations in Sudan and Algeria have forced the resignation of hated regimes. But “governments that defend the rule of the exploiters remain in place,” she said. “What is in front of working people is forging our own revolutionary leadership.” 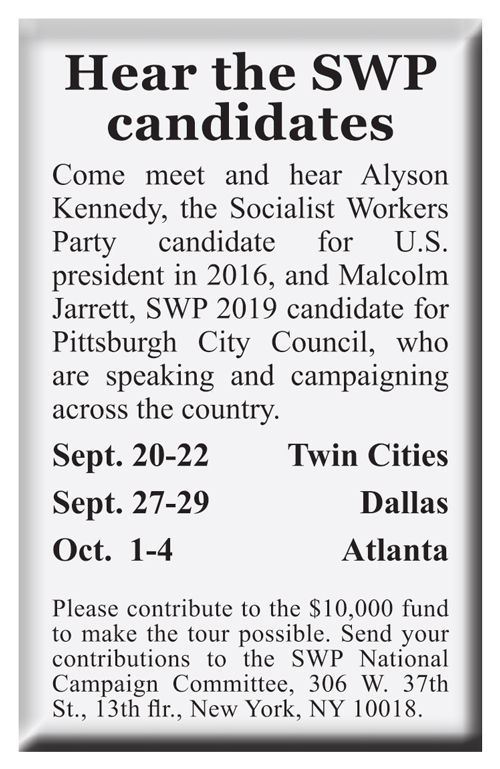 “We need to build our own party, one that can lead working people to overthrow the capitalist class’s dictatorship. The Cuban Revolution shows this is possible,” she added. Kennedy urged participants to join the SWP to help make this perspective presented by the socialist candidates become a reality.

At another lunchtime gathering, Kennedy and Jarrett met with Violet Peterson-Wallace and a friend of hers. Peterson-Wallace recently got a subscription to the Militant and the book Malcolm X, Black Liberation, and the Road to Workers Power from SWP members in Seattle.

“There needs to be a line drawn on hateful speech. That kind of talk can spur on people to acts of violence and I am not sure that should be allowed,” Peterson-Wallace said.

In response Jarrett explained that denying anyone the right to speak sets a precedent that will be used by the bosses and their government against the working class. “We need to be able to discuss and debate all kinds of ideas. By exchanging ideas and experiences in the course of our struggles workers will figure out the way forward for our class,” he said.

Albany SWP runs on ‘program that can defend working people’

ALBANY, N.Y. — “I am running for Albany County Executive for the Socialist Workers Party to put forward a program that can defend working people from the carnage of the crisis-ridden capitalist system and unite the working class in struggle,”…