The liberals in the big-business press editorial offices and the Democratic Party are ecstatic about a leak from an anonymous “whistleblower” — reported to be a CIA agent — who said President Donald Trump mentioned former Vice President Joseph Biden in a phone call with the new president of Ukraine, Volodymyr Zelensky. They think they’ve finally got what they’ve been looking for in their relentless effort to smear Trump and impeach or indict him.

Driven by contempt and fear of the millions of working people who voted for President Trump, or who couldn’t bring themselves to vote at all, Democrats announced a fast-track impeachment inquiry in the House of Representatives. 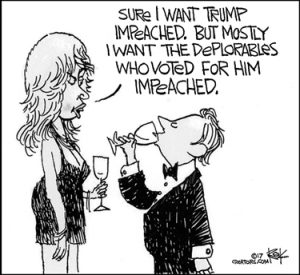 And Democratic House Majority Leader Nancy Pelosi says that’s not enough. She says she will push to change U.S. law so sitting presidents can be indicted and imprisoned.

These moves are popular on the left of bourgeois politics. Michigan Democratic Congresswoman Rashida Tlaib is selling T-shirts to fund her 2020 reelection campaign that says, “Impeach the motherf—–.”

Liberals’ effort to criminalize their political differences with Trump go back before the 2016 election, when FBI boss James Comey tried and failed to swing the election for Hillary Clinton. Then the Justice Department set up Robert Mueller — another former FBI chief — as special counsel to push baseless claims that the president’s campaign had “colluded with Russia.”

Mueller’s team of FBI agents — a number of whom had to be let go because their political bias against Trump became public — utilized hundreds of search warrants, thousands of subpoenas and armed raids on the president’s associates, some of whom were indicted and imprisoned on unrelated charges. But, after three years and endless press hysteria, the liberals had to drop the “Russian influence” campaign against Trump.

Pelosi launched the impeachment inquiry, Sept. 24. She and the liberal media and late-night talk shows allege Trump used his office to get Zelensky to provide dirt on Joseph Biden, the frontrunner in the Democratic primaries. Pelosi cited Trump’s request that Zelensky look into the firing of Viktor Shokin, the Ukrainian prosecutor general, who says he was fired at former Vice President Joe Biden’s insistence, because he was investigating Burisma Holdings Limited, a company where Biden’s son held a lucrative position.

Now if you want evidence of a U.S. government official using his position to push Ukraine around, listen to Biden boast how he got Shokin fired. “I was supposed to announce that there was another billion dollars” coming to Ukraine, he told the Council on Foreign Relations in a 2018 talk posted on YouTube.

“I’m leaving in six hours,” Biden said he told then Ukrainian President Petro Poroshenko. “If the prosecutor is not fired, you’re not getting the money.

“Well, son of a bitch,” the ex-vice president says to laughter, “he got fired.”

All U.S. government officials — bar none — have used Washington’s economic weight to press other governments to do as they want. Trump is no better or worse.

New York Times columnist and Trump-hater Charles Blow claims the meeting with Zelensky shows that “the Constitution is not a sufficient restraint on a lawless president.” He fears that a Democratic candidate defeating Trump in 2020 “is by no means a surety.” In an op-ed in the same paper, Will Wilkinson insists Trump “can’t be allowed to run for any  public office, much less the presidency, ever again.”

Even though these liberal meritocrats insist the enormous perfidy of Trump is completely clear to all but a dullard, they also believe he can win the 2020 elections. They’re convinced working people — his “base” — are so racist, reactionary and backward that they’ll elect him again, and they have to be stopped.

The liberals and middle-class left see working people as a problem that needs to be suppressed. That’s why the impeachment inquiry has been launched. They want to prevent Democrats from having to go up against the president in 2020.

The 2016 elections showed the rulers’ two-party system is in crisis today. “The U.S. rulers and their government have begun to fear the working class,” explains Socialist Workers Party leader Steve Clark in the introduction to The Clintons’ Anti-Working-Class Record: Why Washington Fears Working People. “Because they recognize that more and more working people are beginning to see that the bosses and their political parties have no ‘solutions’ that don’t further load the costs — monetary and human — of the crisis of their system onto us.” To defend their class privilege, they intend to attack the rights of working people because they just aren’t capable of making the “right” decision at the ballot box.

The anonymous CIA agent who the liberals insist on calling the “whistleblower” maintains his or her identity must be kept secret, and admits that his or her accusations are entirely based on secondhand unattributed stories. But this violates the president’s basic constitutional right to confront his accuser.

The use of anonymous and unchallengeable “evidence” — and the rulers’ political police agencies, the FBI and CIA — to remove a president from office, would make it much easier for the government to use similar methods to frame up working-class fighters — the rulers’ far more serious enemy.

The nameless CIA agent’s lawyer is Andrew Bakaj, a liberal who has worked for both Hillary Clinton and Sen. Chuck Schumer. Even the Justice Department Office of Legal Counsel, which recommended giving the transcript to Congress, said information it reviewed on the “source” showed “political bias on the part of the Complainant in favor of a rival political candidate.”

Some liberals fear the impeachment inquiry is misguided, and will only hand Trump the 2020 election. They note one fact — there is virtually no chance the Republican-dominated Senate will vote by two-thirds to oust the president.

For working people, three things are clear. First, the liberals are hell-bent to attack our rights, to suppress working people’s ability to practice politics. Two, they are out to strengthen the bosses’ political police in preparation for deeper attacks on labor and working-class struggles to come.

Third, working people need to organize and build their own independent political party to counter the capitalist rulers’ two-party system, and fight for political power.