“We came here to be in solidarity with the fight pressing for Amber Guyger to be convicted and jailed for killing Botham Jean,” Malcolm Jarrett, Socialist Workers Party candidate for Pittsburgh City Council told Shelia Bennett, one of the many opponents of police brutality gathered outside the Dallas courtroom where Guyger was on trial Sept. 27. “The SWP stands for the fight against police brutality, racist discrimination and the entire capitalist injustice system.”

Jarrett and Alyson Kennedy, the SWP’s candidate for president in 2016, are on a national tour speaking for the party, offering solidarity to autoworkers on strike against GM and taking part in other battles and discussions with working people.

“I have been in the courtroom every day,” Bennett said. “Guyger should have to pay a price. Botham Jean is gone; he isn’t coming back.”

Guyger killed 26-year-old Botham Jean in September 2018, shooting him twice in the chest as he ate ice cream watching TV in his own apartment. The cop claimed self-defense, saying she accidently went to the wrong apartment thinking it was hers, and thought he was an intruder. On Oct. 1 she was found guilty of murder.

Kennedy told Bennett that she had been the SWP’s candidate for mayor of Dallas this year. “I spoke out against police brutality and joined the protests demanding that Guyger be prosecuted and jailed,” she said. “It’s in the interests of all working people.”

The next evening Bennett came to hear Kennedy and Jarrett speak at the Militant Labor Forum about the party, its program and activities, followed by a lively discussion.

After leaving the courthouse, the candidates joined the picket line of United Auto Workers Local 276 members at the large GM assembly plant in Arlington, Texas, part of the national strike. With campaign supporter Hilda Cuzco, Kennedy and Jarrett also stopped by the union hall to extend solidarity.

“We are standing for the temps,” picket captain Eric Smith, who builds rear axles at the plant, told them on the picket line. Two of the main demands of the strike are to make the 7% of GM workers who are temps full-time “regular” workers and to take on the unequal wage “tiers” that GM uses to attempt to divide workers. “All of us work hard, we are all ‘regular’ workers,” said GM body shop worker Chris Roberts. “We need solidarity.”

Kennedy and Jarrett talked with the workers about the national SWP tour and described their discussions while visiting UAW picket lines in other states, as well as the encampment by miners in Kentucky who are fighting for pay stolen from them by the Blackjewel coal company. (See article on front page.)

Two days later the candidates and Dallas SWP members knocked on doors in a working-class neighborhood in Arlington near the GM plant. They discussed the strike and the stakes in it for all working people, as well as introducing the SWP to workers who had seen the nearby picket lines. They found real interest in what the party had to say about how workers can fight effectively under the crisis of capitalism today. Three workers got subscriptions to the Militant  and one bought a copy of The Clintons’ Anti-Working-Class Record by SWP National Secretary Jack Barnes.

Kennedy and Jarrett toured in Minnesota before coming to Dallas. In addition to visiting the UAW picket line at GM’s parts warehouse in Hudson, Wisconsin, they had the opportunity to sit down and talk with Abdi Ali and Marty Knaeble, two Minneapolis-St. Paul airport workers, at a local coffee shop Sept. 20. Ali drives a passenger transport cart for an airport contract company where workers recently won a union-organizing drive. Knaeble, who works on the ramp for Delta Air Lines, helped organize support for their fight. 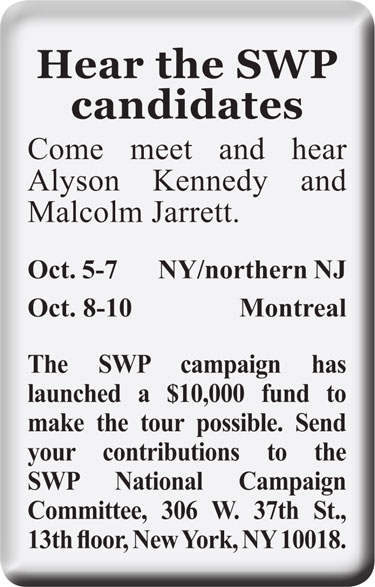 Workers won representation by Service Employees International Union Local 26, which organizes baggage handlers, cabin cleaners, cart drivers and other airport workers at Delta subcontractor AirServ. “We won a union, but we are still fighting for $15 an hour,” Ali said. “I only make $10 driving a cart after nine years on the job.” He said workers there have been fighting five years for the $15.

Like Ali, many of the SEIU members are from East Africa. He described a protest by aircraft cleaners after some Muslim workers were fired by another Delta contractor for demanding the right to pray during their work shift in 2018. The workers won their jobs back.

In light of the GM strike, Knaeble talked about the “temp” workers exploited by Delta who only won sick days after other airport workers fought for and won them.

“The ruling class and the working class are being drawn into battle. The GM bosses want to impose even more concessions on the autoworkers,” said Jarrett. “They want to keep them divided by a two-tier wage structure and more and more temps. This led to the strike.

“There have been massive mobilizations in Sudan, Hong Kong and Puerto Rico. These struggles show the power of the working class,” Jarrett said. “But they don’t lead to real, lasting change. The missing ingredient has been independent working-class leadership.”

The four talked about what kind of leadership is necessary in the labor movement today. “There is a change in the U.S. working class — it started with the teachers strikes last year,” Kennedy said.

“You cannot transform the unions into fighting organizations without organizing workers to stand up for themselves and offer solidarity to others who do so,” she said.

“Fighting to unify the working class, to build self-confidence and class consciousness in struggle, is the road forward,” Kennedy said. “It is on the line of march to fight to end capitalist exploitation and oppression once and for all, for working people to take political power into their own hands.”

To get the SWP’s 2019 campaign program, a fighting program to confront the economic, social and moral crisis caused by capitalism, go to the home page of the Militant’s website at www.themilitant.com

George Chalmers from Dallas and David Rosenfeld from Minneapolis contributed to this article.

Starting Saturday, Oct. 5, the Militant  is launching a nine-week drive to expand the readership of the paper and of books by Socialist Workers Party leaders and other revolutionaries internationally. The drive has an international goal of 1,100 subscriptions and…