Socialist Workers Party members and supporters have been taking the Militant to workers on strike at Mack Truck, Asarco and General Motors and building support for these fights through taking news of these class battles door to door to working people in cities, towns and rural areas.

This is an important part of the fall campaign to expand the readership of the paper and introduce working people to books by SWP leaders and other working-class revolutionary leaders that explain how to build an effective independent fighting movement to counter the bosses and their government. The nine-week drive to sell 1,100 Militant subscriptions and 1,250 books runs through Dec. 10.

Thirteen subscriptions were sold to copper miners on strike against Asarco and other workers near Tucson and Kearny, Arizona, and by going door to door there, reports Deborah Liatos. Six were sold at the picket lines, four and the book In Defense of the US Working Class were sold at the United Steelworkers union hall in Kearny, and three on workers’ doorsteps in Kearny.

“I decided to get the subscription because I believe in what you are doing,” Robert Kershner, who works as a heavy equipment operator at the Mission mine in Sahuarita, told Liatos. “You support our movement and I’ll support yours.”

From Chicago, Naomi Craine writes, “We’ve found a lot of interest taking the Militant and books on working-class politics to GM strikers in the region and door to door near their picket lines.”

In a visit to GM picket lines in Toledo, Ohio, Oct. 11-12, two strikers subscribed to the Militant and another 15 got copies of the paper, Craine said. “When we knocked on doors of workers across the road from the plant, we found a lot of interest in the SWP’s program.” Three subscriptions were sold there, she said. “I honk for the strikers every day,” Amanda Godbee, a drywall finisher and union member, told Craine, talking about the GM picket line she drives by.

Washington out of the Mideast!

They also discussed the role of the U.S. rulers’ military forces in the Middle East. “Washington as well as the governments of Turkey and Iran use workers as cannon fodder in wars for the interests of the wealthy,” Craine said. “We’re for bringing all U.S. troops home.” Godbee nodded in agreement, saying her husband had served in both Iraq and Afghanistan. She got a Militant subscription.

“We also talked to autoworkers at the shift change at Chrysler’s Jeep plant in Toledo, selling 18 copies of the Militant,” said Craine. Like other autoworkers, they’re following the GM strike closely.

A big topic of discussion in Chicago is the teachers strike. Campaigners are making use of the pamphlet The Working Class and the Transformation of Learning: The Fraud of Education Reform Under Capitalism, by SWP National Secretary Jack Barnes. One copy was sold going door to door in the Ashburn neighborhood to a woman who works in a clothing store.

“We talked about supporting the teachers’ fight for better working conditions, including smaller class sizes,” said Craine, “but we explained even if they win all their demands it won’t change the basic character of capitalist schooling, which is designed to ‘learn’ workers to be obedient, not to be educated. Opening the door to real lifelong learning involves building a movement for working people to take political power.”

To encourage greater readership of the party’s revolutionary program, all Pathfinder books and copies of the Marxist magazine New International are being offered at 20% off. In addition, eight titles are offered at half price when purchased with a Militant subscription (see ad below). Beginning Nov. 1, an important new title will be available — The Turn to Industry: Forging a Proletarian Party.

Get workers’ point of view

Going door to door in Beloeil, south of Montreal, Katy LeRougetel and Amelie Lanteigne met up with Michelle Guay, who has been following the strike by 35 members of the United Steelworkers at the Galvano plant there. “It’s important to get workers’ point of view,” Guay said, asking the two campaigners to come back in a few days when she’ll have the money to get the Militant subscription.

“Going door to door made me realize how important an activity this is,” said Lanteigne, who is new to campaigning along with Communist League members. “It’s knocking on one door after another that makes you see that the capitalist system tries to divide us and creates fears that aren’t real.”

In New Zealand, Patrick Brown, the Communist League candidate for Auckland Council, and campaign supporter Janet Roth traveled 125 miles south of Auckland to the King County town of Te Kuiti Oct. 8 to join with some 200 farmers at a government-sponsored meeting. The farmers heard cabinet ministers and other government officials propose measures to place the burden on farmers to expand fencing and planting along polluted waterways.

A number of farmers objected, saying that bearing the labor and financial hardships of such measures might force some indebted farmers to sell part or all of their land. Seven copies of the Militant were sold there, with a number interested in the article in the Oct. 14 issue about farmers protesting against government attacks in the Netherlands.

Following the meeting the two campaigners went door to door in the neighborhood, selling a Militant subscription to a retired timber worker. 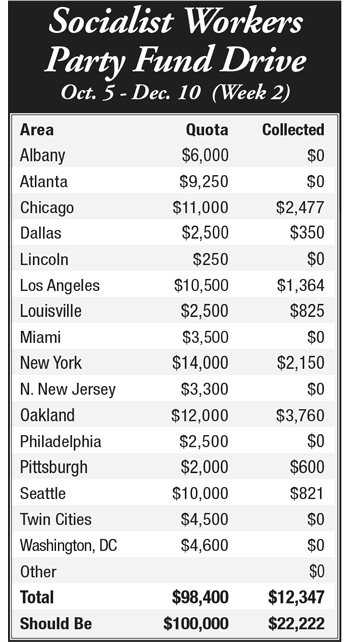 The Socialist Workers Party is also campaigning to raise $100,000 to finance its political work. This is the party’s one annual fund.

When party members and supporters talk to workers on their doorsteps or at labor actions and social protests, they often asked if they could give some money. These contributions are an important part of the fund effort.

Others more familiar with the party and the Militant join in to make pledges and larger contributions. Every donation, no matter how modest, is crucial.

Those who value the SWP’s efforts to tell the truth about the big political questions facing workers today, and build support for today’s labor struggles, are encouraged to join in this effort to broaden the reach of the Militant and revolutionary books and to give to the fund drive. To get involved contact the SWP or Communist Leagues listed in the directory.

Front Page Articles
Feature Articles
Also In This Issue
Books of the Month
25, 50 and 75 years ago
Corrections