The Socialist Workers Party slate of candidates poses the need for working people to unite and organize to fight to roll back the effects of the capitalist rulers’ economic, political and moral crisis today. Through these struggles we can gain the self-confidence and class consciousness — of our own self-worth, as Malcolm X said — to take political power and reorganize society in the interests of all humanity.

They speak out against the boss class’s endless wars and looting of the resources and labor of the semicolonial world. They explain that it is only the rise of the labor movement that can win workers control over production and safety and that can prevent the profit-driven capitalist exploiters from despoiling both land and labor.

History shows that working-class leaders, like Fidel Castro, Malcolm X and Farrell Dobbs, emerge from class-struggle battles and act on the confidence that working people can change our conditions and ourselves. A leadership will be forged that carries the fight for working people’s interests through to the end.

The party’s campaign presents a road forward based on the worth of the one class — the working class — that through revolutionary struggle is capable of putting an end to the dictatorship of capital. This is a struggle worth devoting your life to. Join us! 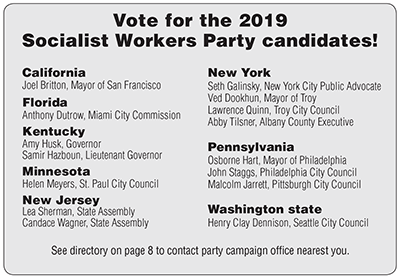 Front Page Articles
Feature Articles
Also In This Issue
Books of the Month
25, 50 and 75 years ago
Corrections