As the Socialist Workers Party drive to expand the readership of the Militant  and books by revolutionary working-class leaders enters its final stretch, the newspaper is being used by party members to build solidarity with labor battles waged by workers at Canadian National Railway and copper miners at Asarco in Arizona and Texas.

The Militant  tells the truth about these fights. It explains why all workers have a stake in the outcome.

Lee purchased a copy of the book and told Cuzco he wants to join solidarity actions for the striking copper miners after she described the fight at Asarco to him.

“No working-class organization could ever prevail in face of the employing class and their state power if it relied on the mobilization of wage workers in America’s largest metropolitan areas alone,” writes SWP National Secretary Jack Barnes, in the introduction to the book.

“With class-struggle leadership of a high caliber, however, with a proletarian leadership that acts socially and thinks politically, the unions can reach out and organize workers and their allies in smaller cities and towns — women and men, working people of all skin colors, nationalities, mother tongues, immigration statuses, and religions,” he writes.

Lee also got the titles The Clintons’ Anti-Working-Class Record: Why Washington Fears Working People  by Barnes and In Defense of the US Working Class  by SWP leader Mary-Alice Waters.

SWP members joining picket lines and solidarity actions of copper workers on strike in Arizona and through door-to-door discussions with workers in the area have sold 40 subscriptions to the Militant — 30 of them to striking miners, who have also purchased eight books, reports Deborah Liatos.

Solidarity with workers in Iraq

“My party has opposed Washington’s military intervention in Iraq during the first Gulf War in 1990 through to today and calls for the immediate withdrawal of all U.S. troops from the Middle East,” Maggie Trowe, SWP candidate for U.S. Senate from Kentucky told a rally of some two dozen Iraqis Nov. 18. The action was called in solidarity with protests sweeping southern Iraq against the sectarian political system, worsening living conditions and Tehran’s interference in the country.

“We join you in calling for an end to the lethal attacks on protesters in Iraq by the government there and we join with workers in Iraq and Iran to oppose Tehran’s reactionary military presence in the region,” Trowe said.

Three rally participants got subscriptions to the Militant, one of them bought New International no. 7  with the article “Opening Guns of World War III: Washington’s Assault on Iraq,” by Jack Barnes, and a copy of The First and Second Declarations of Havana  in Arabic.

SWP members Ned Measel and Kaitlin Estill joined a rally of over 12,000 teachers and supporters in Indianapolis Nov. 19.

“This fight of the teachers needs to win support from other school workers, parents and within the broader labor movement,” Estill told art teacher Diana Sale at the rally. Sale was interested in hearing more about the nine-day strike by West Virginia teachers last year, which drew on the legacy of coal miners’ battles that have taken place in that state. She purchased a Militant  subscription and the book In Defense of the US Working Class, which describes the West Virginia teachers’ fight.

Step up contributions to SWP fund

The drive to sell 1,100 Militant  subscriptions  and 1,250 books runs through Dec. 10. At the same time the SWP has launched a $100,000 fund to help cover the party’s political activities. Winning new contributions and collecting pledges to the fund in the final two weeks of the campaign can help take the fund drive over the top.

To encourage greater understanding of the party’s revolutionary program, all Pathfinder books and copies of the Marxist magazine New International are being offered at a 20% discount through the end of the drive. In addition, eight titles are offered at half price when purchased with a Militant subscription. And the most recently published book The Turn to Industry: Forging a Proletarian Party  by SWP National Secretary Jack Barnes is available at a special price of $12 and for $10 with a subscription. 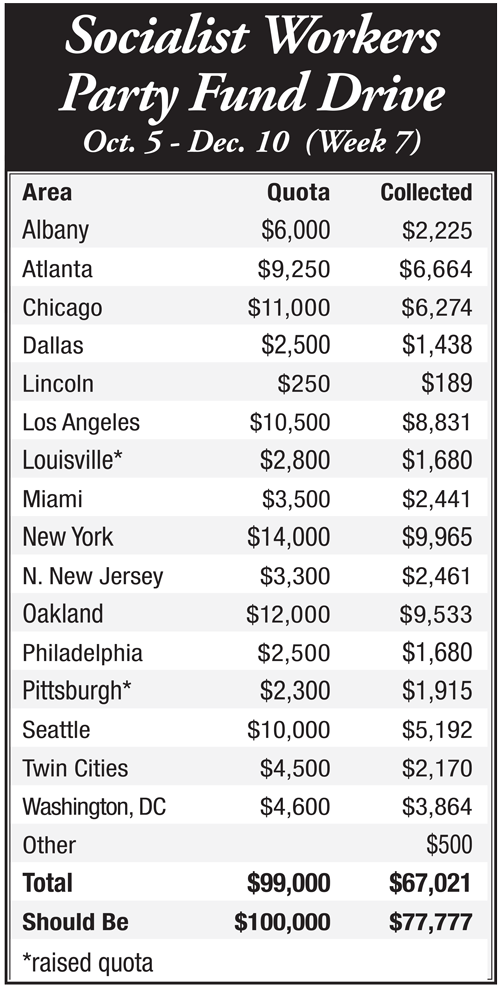 “We just moved here from South Dakota and people there don’t like the governor who claimed to be for the farmers, but she hasn’t carried out that promise,” Samantha Hanson, a part-time retail worker, told SWP member Jeanne Fitzmaurice on Hanson’s doorstep in Kent, Washington, Nov. 23. “I don’t think you can make changes through elections. It’s going to take a revolution.”

Hanson wanted to learn more about the SWP’s program and purchased The Turn to Industry: Forging a Proletarian Party, In Defense of the US Working Class and Is Socialist Revolution in the US Possible?  as well a Militant subscription.

Those wanting to join the effort to broaden the reach of the Militant  and revolutionary books and help with the fund drive, can contact the SWP or Communist League branches in your area listed here.