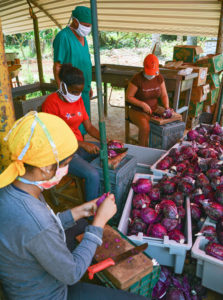 Working people and youth all across Cuba — backed by their government — are organizing to confront the challenges they face from the drop in world trade and the punishing economic war Washington has waged against them for over 60 years. They’re being mobilized to fight to increase food production.

Their ability to do so is grounded in the revolution they made in 1959, a revolution that is very much alive today.

The coronavirus pandemic has exposed the “incapacity of the capitalist health system to effectively respond and safeguard people’s lives,” the Central Organization of Cuban Workers (CTC) said in a statement April 22. Under capitalist rule, “the bosses are prioritizing economic and financial measures without regard for labor rights.”

Unions in Cuba offer their “militant solidarity with the struggles of union organizations in those countries,” the CTC said.

A new generation of Cubans is joining volunteer work brigades to take steps to help provide health care, food and other necessities to working people in face of imperialist pressure and the worldwide COVID-19 outbreak.

The unions, the Federation of Cuban Women, neighborhood Committees for the Defense of the Revolution, student groups, the Union of Young Communists (UJC) and the National Association of Small Farmers are organizing to increase production and to make sure that no one is left on their own.

Work brigades this year’s May Day

As part of measures taken to prevent the spread of the virus, the Cuban government canceled the annual May 1 International Workers Day march, which attracts over a million people in Havana every year.

In place of the parade, the CTC is organizing to make May Day another front in the battle to increase food production. In Santa Clara, leading up to May 1 the unions are organizing 17 special brigades from area factories and workplaces.

The first one, made up of 30 young workers from the Sugar Workers Union, was inaugurated April 22 at La Riviera urban vegetable farm. They are taking the place of older workers who are more vulnerable to the virus.

The same day the National Energy and Mine Workers Union inaugurated a brigade that will plant boniato, a variety of sweet potato, at the state-owned Valle del Yabú Agricultural Enterprise.

Increasing food production in Cuba is especially important in the face of the effects of the worldwide capitalist economic crisis. Cuba normally imports some 60% of its food supply, as well as fertilizer and pesticides.

Increasing production is not a simple task. In Ciego de Ávila only 20% of farmland is irrigated; in Granma province barely 6%. And much of the island faces a drought.

Federico Hernández, president of the Bayamo Provincial Defense Council, which brings together both government officials and leaders of mass organizations, told the press, “We have to redouble our efforts to organize in an equitable way what we have so that no one is left on their own.”

More than 9,000 workers whose workplaces are on hiatus are being organized to work in agriculture across the island.

The Union of Young Communists is leading 150 contingents, with more than 2,700 young people, who are working the fields, helping out at quarantine centers and other key tasks.

Diosvany Acosta Abrahantes, second secretary of the National Committee of the UJC, told Juventud Rebelde that all the necessary health precautions are being taken. “Everyone together and well-informed are helping responsibly, with conviction and discipline,” he said.

In Santiago de Cuba workers at workplaces closed down for now prepared 4,400 bags of food to deliver to those most in need. This was done in consultation with the neighborhood family doctors, who systematically visit people in their area. They “told us where to find senior citizens who live alone, pregnant women and patients with complex diseases,” said Frank Hierrezuelo Betancourt, who heads up food storage in the city.

‘It’s not titles or posts that matter’

Juventud Rebelde interviewed two students and a university professor from Artemisa province who had volunteered to do whatever is needed. Their daily job now is cleaning and sterilizing rooms of people in isolation centers, under observation to see if they have the virus.

Law professor Yuliesky Amador Echevarría said they are no different than other workers. “Scientific degrees, academic categories, or posts within the university don’t matter.” What matters, he said, “is showing everything that is human and sensitive that we possess.”

Maikel Manuel Barrios Pérez, a physical education student, said that until the pandemic began he liked to hang out with friends and “enjoy life.” He had never done this kind of cleaning before, he said, but joining in the volunteer effort has changed his outlook.

In capitalist countries bosses are jacking up food prices to increase their profits in the face of food shortages. They force farmers to dump milk or plow under fruits and vegetables they can’t package and sell profitably. In contrast, in Cuba the government is organizing to minimize food shortages for working people.

Reuters headlined an article April 23 on steps Cuba’s revolutionary leadership is taking along these lines, “Cuba’s Ration Book Stages Comeback Due to Coronavirus Pandemic.” The capitalist press usually presents the ration book as a harsh restriction imposed by a heartless dictatorship.

In fact, rationing is popular among working people because it helps ensure that everyone, regardless of their situation, including whether they have relatives in the U.S. who send them dollars, can obtain essential food and hygiene products, often at very low prices.

The government has recently added more items to the ration book — called the libreta — including laundry soap and extra allotments of chicken.

Havana resident and retiree Esperanza Moreno told Reuters that the libreta is “like a lifeline in these times of virus.”

Volunteer brigades are also visiting millions of homes daily to make sure anyone who is sick gets the health care they need.

Unlike overcrowded and dehumanizing U.S. prisons where coronavirus is running rampant, in Cuba not one prisoner has gotten the disease.

Another reflection of the moral values that underlie the Cuban Revolution is the more than 1,400 volunteer doctors and nurses now serving in 22 countries at the request of governments there, treating COVID-19 patients. These internationalists say that a principle of the revolution is that “we don’t give what is left over, we share what we have.”

This is only possible because working people in Cuba — led by Fidel Castro and the July 26 Movement — overthrew the U.S.-backed Batista dictatorship in 1959, initiating the first socialist revolution in the Americas. They were transformed in the process, and they’ve used the workers and farmers government they created to offer their example — and help — to working people worldwide. U.S. imperialism has never forgiven the working people of Cuba for this.