Tens of millions of working people in the U.S. and many millions worldwide have been thrown out of work through lockdowns imposed by capitalist governments, shutting factories, transportation, retail outlets, hotels, restaurants and more. The key problem facing workers today is capitalism, not “the virus.”

Working people are looking at an unprecedented economic depression and social crisis. In the U.S., government debt is soaring to levels not seen since the second imperialist world war, as trillions of dollars are printed and poured into the coffers of big business to try to alleviate their economic contraction. 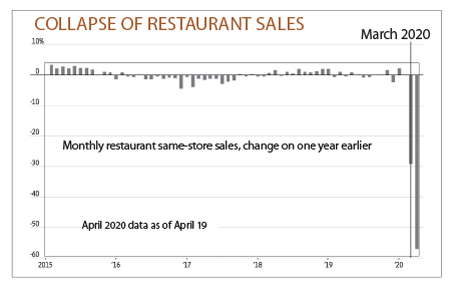 A devastating decline is hitting working people in less developed countries in Asia, Africa and Latin America. Currencies are tottering and export revenues are plummeting, exacerbated by the slump in oil prices. The debt burden to imperialist banks is piling higher. Protests against these conditions are growing.

Workers in Nigeria — a country of 200 million people, Africa’s largest economy and the continent’s biggest crude oil producer — face a deep crisis. The government there tightened the lockdown April 23, especially in the country’s two largest cities. In Lagos, where half the city’s 21 million people live on what they can make that day, the restrictions are seen as a possible death sentence. “I’m running out of food,” Umar Usman, who pushes a cart to deliver goods, told the press.

Millions in the U.S. have no source of income, no way to buy food. At the same time, farmers are being forced to kill hogs, cows and chickens and plow vegetables under because the rulers’ shutdown closed the schools and restaurants that used to buy them.

The UNITE HERE union, which represents some 300,000 mainly restaurant and hotel workers, says 98% of its members are out of work.

In the U.S. class polarization is sharpening — between the bosses and the meritocratic professional layers that service them on the one hand and the workers, farmers and other small proprietors on the other. One layer lives in comfort, even luxury, “working at home,” while working people without jobs face disaster, and those who are at work face speedup and attacks on their wages and working conditions as their employers seek to boost profits. The upper middle class layers form the most vociferous boosters of the lockdown and attacks on workers’ rights.

Today’s unfolding crisis conditions are just the beginning of an extended depression. Even tentative, partial moves by some bosses and state governments to start things up again, seeing their companies and coffers draining away, won’t begin to make the situation “normal.”

Workers need to fight for jobs, and for those working to fight to stop bosses from trying to offload their capitalist crisis onto our backs.

Being at work and joining the struggles breaking out there is the only road forward for working people. Workers at numerous Walmart stores have organized to fight moves by the bosses to attack working conditions and alter schedules. Rail workers are seeking ways to push back at bosses’ attempts to cut crew sizes.

Thousands joined a protest in Madison, Wisconsin, April 24 against the state government’s decision to extend its lockdown. Like similar actions in many other state capitals recently, this was organized by conservative groups targeting administrations run by Democratic Party governors. But the rally drew numbers of workers, farmers and small-business people being crushed by the crisis.

As hundreds of thousands of “people lose their jobs, businesses, farms, life savings, they will also be losing their dignity and self-worth,” Charlie Jones, a 28-year-old dairy farmer, told the rally. He denounced “all the governors who recklessly shut down our economy,” bringing about a climate of “fear, anxiety and desperation.”

“Our milk is worthless,” he said, “our animals are worthless,” as meatpacking plants “that aren’t shut down are overwhelmed by the volume of animals coming in.” Even “my machinery is worthless,” he added, as farmers try to “stave off near-certain bankruptcy.” He said he agreed people need to take “precautions, but doing so at the expense of an economic collapse is not the answer.”

Across the world as restaurants closed, the demand for seafood collapsed, particularly for luxury items like lobster and crab. Trawlers are tied up at docks from Hawaii to Massachusetts with thousands of fishermen thrown out of work. Generations of fishing families and whole coastal communities are being devastated.

More than 4.4 million workers across the U.S. filed for unemployment benefits the week ending April 18. Over the past five weeks, 26.5 million people officially became jobless. One poll reports that for every 10 workers who filed for unemployment pay, three or four others tried and couldn’t get through, and another two jobless workers never even tried.

Many of the 30 million small-business owners in the country have also been devastated by official shutdowns. Some were outraged after finding out an additional $350 billion federal relief fund ran out within minutes of being launched.

At the head of the line were the big banks, from JP Morgan Chase to Bank of America and Wells Fargo, tasked by the government with disbursing the funds. They pocketed almost $6 billion in fees.

The boss class also wants to see an end to the lockdowns. They’re seeing past profits bleed away and want to revive exploiting workers’ labor. They are demanding government protection against being sued over health and safety issues. State governments are setting new deadlines to reopen production and commerce.

As the bosses gear up, they’re taking aim at workers’ wages and cranking up speedup. Ford is calling in skeleton crews of “volunteers” to prepare for full production. A paint shop worker at Ford’s Dearborn Truck plant, who asked that his name be withheld, told the Detroit Free Press  April 26 that “all of the jobs have been packed with tasks to reduce the number of employees” and to keep the production line running at “a frenetic pace.”

Protests by workers demanding jobs and restarting production have taken place in many states and in Lebanon, Poland, Argentina and beyond. They will spread, as will fights over conditions on the job.

Alyson Kennedy, Socialist Workers Party candidate for president, released the following call to action April 28. Malcolm Jarrett is the party’s candidate for vice president. Tens of millions of workers have been thrown out of work in the U.S., robbed…

ST. PAUL, Minn. — A wave of closures of meatpacking plants around the country is hitting working people hard, including those thrown out of a job, farmers with nowhere to sell their animals, truckers and others across rural communities where…

Facing increasingly rising hardships that fall most heavily on working people, thousands of anti-government protesters have resumed demonstrations across Lebanon. Actions involving people of all faiths demanding jobs, an end to crushing living conditions, for political rights and against Tehran’s…

Below are interrelated excerpts from “What the 1987 Stock Market Crash Foretold,” a Socialist Workers Party resolution published in New International no. 10. It will help readers of the Militant place today’s economic and social crisis within the longer arc…

MANCHESTER, England — “We are not just numbers on a sheet, we are going to fight,” sacked Debenhams department store worker Valerie Conlon said as she joined a protest outside the store in Cork, Ireland, April 21. Some 2,000 Debenhams…