“The prison officials are targeting the Militant because of its political viewpoints,” wrote the paper’s attorney, David Goldstein, in an appeal filed with the Florida Department of Corrections’ Literature Review Committee May 1. This is “in violation of the First Amendment rights of both subscribers and publishers.”

The Militant received notice April 17 that the Jefferson Correctional Institution in Monticello, Florida, impounded issue no. 13, claiming photos on pages 1, 5, 14 and 16 were “gang signs.”

What “you perceive as ‘gang related’ symbols are meant to be symbols of solidarity,” wrote Walmart workers Danielle Snyder and Dan Fein from the Chicago area April 29 to the Literature Review Committee, urging it to overturn the ban. “The U.S. Constitution guarantees freedom of speech for all, and this includes prisoners” who “still have the right to read and possess different points of view.”

What the pictures prison authorities cite to try to justify their ban actually show are workers with their fists in the air expressing their determination to fight for safety, unions and dignity on the job. They include striking meatpackers at a Perdue chicken processing plant in Kathleen, Georgia, and nurses protesting outside a medical facility in Richmond, California, in March. Another photo shows members of United Steelworkers Local 8888 during their successful fight to organize a union at the Newport News, Virginia, shipyard in 1979.

Authorities allege these photos are “a threat to the security, good order, or discipline of the correctional system or the safety of any person.”

This impoundment “is arbitrary, capricious, discriminatory, unconstitutional,” wrote Goldstein. “There is not the slightest hint of anything on the listed pages (or elsewhere in the issue) that could rationally be construed as threatening FDOC prison security.”

Letters urging the Literature Review Committee to overturn this outrageous ban have been sent by the National Lawyers Guild, American Civil Liberties Union of Florida and Amnesty International USA.

The Reporters Committee for Freedom of the Press “strongly urges the Literature Review Committee to overturn the impoundment,” said the organization’s May 4 letter. “It appears arbitrary and irrational. Prisons should not invoke facially legitimate but overly broad justifications — such as ‘safety and security’ — to censor content.”

From Piedmont, Quebec, professor David Lefrancois wrote, “Raising fists in the air is overly familiar as part of public, political, sportive, events. Like numerous defenders of political rights, subscribing or not to the Militant, I am sending this letter of support of the fight against censorship, calling on the Committee to overturn all the bans of the paper in Florida prisons.”

This is the first issue of the paper Florida prison officials have barred in eight months. But from mid-2017 to August 2019 they impounded almost three dozen issues, over one-third of all Militant issues printed over that time. Most of these were subsequently overturned.

The bans of the Militant over the two years “were at least 7-8 times as many as in the entire rest of the nation, state and federal prisons combined in the past decade,” wrote Goldstein. 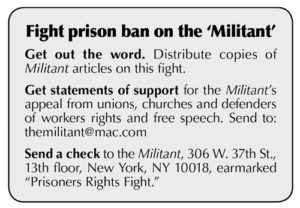 “A policy that bans the reporting or coverage of worker protests,” wrote Goldstein, “or otherwise offends the political sensibilities of a prison official, as is plainly the case here, cannot withstand constitutional scrutiny.

“The Militant requests that the Literature Review Committee overturn this impoundment and direct that this issue be immediately distributed to all inmate subscribers in FDOC custody.”

“Whether workers are protesting in the streets or are behind bars they have the same constitutional right to freedom of speech and the right to read and form their own opinions about political events around the world,” said Militant editor John Studer. “We are fighting to reverse this ban as we’ve done every time other issues have been barred over the years.”

Studer urged readers of the paper to keep getting statements from co-workers, unions, churches and defenders of political rights calling for ending the impoundment. They should be sent to the Literature Review Committee, Attn: Dean Peterson, 501 South Calhoun St., Tallahassee, FL 32399-2500. Email: Allen.Peterson@fdc.myflorida.com. Send a copy to themilitant@mac.com.