Hundreds of millions of working people are being thrown out of their jobs to face the dire consequences of government-mandated economic shutdowns — mounting depression conditions not seen for almost a century.  These are the consequence not of a disease, but of the deepening crisis of capitalist rule, whose priorities are profits for a handful of propertied families at the expense of workers and farmers.

Over the last six weeks more than 30 million workers in the U.S. have lost their jobs, and that’s just the government’s “official” figures. In fact, the number is far greater if you were to add in temporary workers, “self-employed” workers, undocumented workers and all those who work off the books.

Under the variety of lockdown orders imposed by governments at all levels, these workers — and millions more who the capitalist rulers don’t consider “essential” — are condemned to hunker down in their homes, isolated, watching their bank accounts disappear. They are subjected to the capitalist media’s nonstop drive to terrify them about coronavirus.

Workers need to have a job, to be at work, to be active in the working class, looking to organize and fight to defend our right to work, our wages and working conditions against the bosses’ efforts to make us pay for their crisis.

The bosses are looking to get production going again, as their profits plummet and their competitive positions in world trade stand exposed. Overall orders in the U.S. for durable goods fell 14.7% in March alone, the second biggest collapse ever recorded.

The employing class looks forward to increasing its exploitation of the working class, to outcompete its rivals on our backs.

Many bosses combine plans to reopen their factories with slashing more jobs to maximize profits. GE bosses announced May 4 they are eliminating some 13,000 workers in their aviation division and furloughing thousands more. The Big Three auto companies — General Motors, Ford and Fiat Chrysler — say they will reopen production on May 18.

Workers power comes from the fact that our labor power is what produces all wealth, including the lion’s share that the bosses expropriate. It is from struggles on the job that we learn how to unite and develop self-confidence and class-consciousness.

There are growing protests by workers seeking to push back against the attacks by the bosses, their Democratic and Republican political parties and their government. Hundreds of independent truckers organized “slow roll” protests in Los Angeles, Washington, D.C., and Chicago May 1, caught between the squeeze of brokers who are slashing their pay and a government that regulates them to death. Immigrant workers in Washington state and elsewhere also marched on May Day, demanding amnesty to be able to work without fear of deportation.

Similar battles are unfolding worldwide, from garment workers fighting for work and back pay in Bangladesh to Debenhams department store workers in Ireland demanding their jobs back.

The city government in New York is trying to push back workers’ political rights, to make it harder for us to organize and fight. “We’re not doing rallies at this point,” New York Mayor Bill de Blasio told a May 1 press conference. He has unleashed thousands of cops to enforce this and other attacks on workers who seek to come together.

Demonstrations against government clampdowns and harassment have taken place in state capitals across the U.S., and from Beirut to Hong Kong.

The bosses are pushing to get their factories, mines, mills, transportation and retail outlets going again, but the reality is the unprecedented free fall in global production and trade will mean a prolonged capitalist crisis looms, with no way back to “normal.” 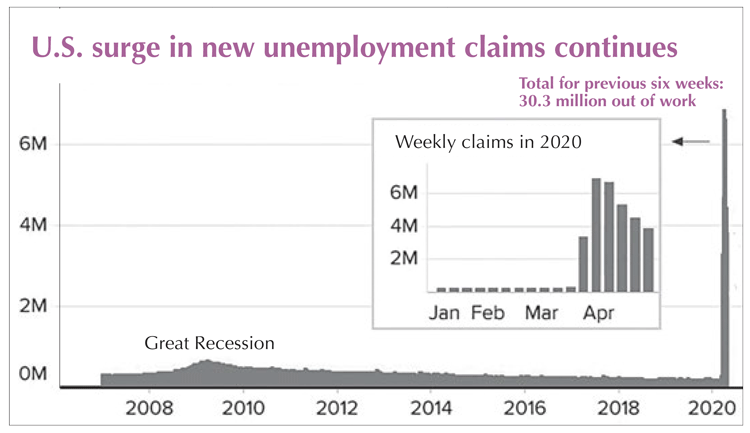 The aviation industry is particularly hard hit. The headlines say it all: “Boeing Will Cut 16,000 Jobs After Posting a Massive Loss”; “Airline Shares Tank After Warren Buffett Reveals He Dumped Airline Stocks.”

Central banks have flooded the coffers of big business and imperialist banks with ever more stimuli, pushing their debt higher in an effort to finance the bosses out of the deflationary slump. These mountains of government debt, not seen since the second imperialist world war, threaten both financial and currency crises in the future.

Working people in the U.S. and around the world, saddled with debt for their cars or student loans, homes, farms or small businesses, are already hit hard. Worse, they, like toilers living in countries across the underdeveloped world, will bear the brunt as inflationary pressures erupt and interest rates climb.

In a taste of things to come, the Iranian government, after five decades of “chronic inflation,” announced plans to cut four zeros from the country’s currency, and give it a new name.

Such conditions will breed more struggles, leading to solidarity among fellow working people, whether wage slaves or debt slaves, against the same class enemy, the billionaire exploiters.

Layoffs are now spreading to public workers, as local, state and federal governments look to cut expenses by cutting services.

The economic crash is speeding up the unraveling of the European Union, as the capitalist masters in each country seek to look out for number one. The European Commission released its “spring forecast” May 6, predicting a collapse in economic output on the continent. This will exacerbate economic and social divisions within the EU, it said, and threaten eurozone “stability.”

The precipitous economic decline abruptly reversed the last two decades of job growth in the semicolonial world. This was hyped as a product of “globalization,” especially in South Asia and China. The number of people living on less than $1.90 a day fell from 1.9 billion people in 1990, a third of humanity then, to 734 million, 10% of the world’s population, by 2016.

Now 2 billion toilers may be pushed back into destitution. In Bangladesh alone, a million garment workers have already lost their jobs due to the abrupt cutoff of orders from the imperialist countries. They suddenly face poverty they thought they had climbed out of.

Many millions across the African continent, nearly half from the sub-Saharan region, have lost their jobs and face going hungry.

Seizing the excuse of the pandemic, the Indian government’s six-month-long, military-enforced lockdown in Kashmir has been extended. The streets of Srinagar, the capital, are now barricaded with razor wire and stone-filled drums. Arrests and beatings by Indian troops are increasing.

In a callous move to aid the employing class, the government in Bangalore — the center of India’s information technology industry — blocked efforts of thousands of laid-off workers to return to their homes in the countryside. They want this army of unemployed workers stuck there, for use whenever the bosses move to restart production.

From Bangladore to New York, the road forward for working people is to be back to work, and fighting to defend and advance their interests.

Alyson Kennedy, the Socialist Workers Party 2020 candidate for president, issued the following statement May 6. Malcolm Jarrett is the party’s vice presidential candidate. Working people are finding ways to unite and fight the rulers’ assaults on our jobs, wages…