As bosses worldwide are stepping up attempts to restore their profits on our backs, working people are finding ways to defend ourselves. The fight by some 4,300 striking shipyard workers in Bath, Maine, is setting an example of resisting deepening assaults on jobs, wages and working conditions.

Fresh viral outbreaks and accompanying renewed government lockdowns have slowed a tentative recovery of the global capitalist economy. In the U.S., official government jobless figures for June, an understatement of the real level, were 20.4% in New York, 19.5% in Los Angeles and 16.1% in Chicago.

The parties of the ruling rich, the Democrats and Republicans, are haggling over the July 31 phaseout of the $600 supplementary weekly payments to two-thirds of the 31.8 million people who rely on federal and state unemployment benefits. There are many more that haven’t been able to cut through the red tape to claim, or haven’t received, any of the benefits they deserve.

Meanwhile, many small businesses are folding and millions of furloughed workers are becoming permanently unemployed.

Working people also face cuts to wages and hours. Bosses claim this is a “shared sacrifice” and workers should be grateful to have any job at all. More than 6 million workers who want full-time work have been forced into part-time employment during the pandemic. Bosses at e-hail taxi company Lyft have cut employees’ salaries by up to 30%.

More layoffs are coming. On July 24, oilfield service company Schlumberger announced plans to cut about 21,000 jobs. Bosses at Daimler, the parent company of Mercedes-Benz, said they may cut 30% of their workforce of 300,000 in 17 countries, and this comes on top of cuts of 10,000 jobs last December.

In response to these conditions, working people are carrying out on-the-job actions and organizing strikes. In southern Brazil, thousands of Renault autoworkers have been on strike since July 22 over the layoff of some 750 workers at the Sao Jose dos Pinhais plant. They’re demanding the  bosses rescind the job cuts.

They are fighting the bosses’ demands to reduce paid time off, sick leave, and more than double health care premiums for many workers. They are also demanding higher staffing levels and sufficient personal protective equipment. 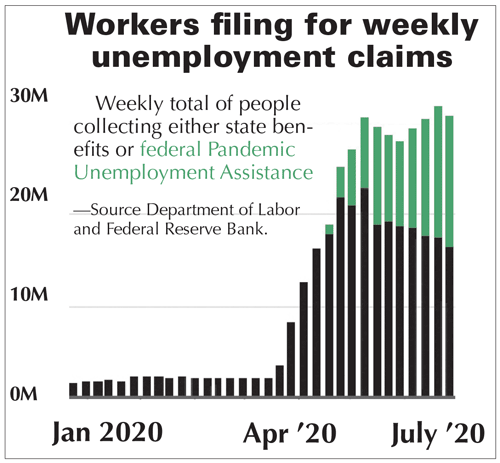 Bosses in industries across the country view workers’ lives as expendable. Nowhere is this more evident than in meatpacking where they speed up production lines, jam workers closer together and pressure them to come to work while sick. Across the U.S., more than 16,000 meatpackers in 23 states have been infected with coronavirus and 86 have died, according to the Centers for Disease Control and Prevention.

The owners of Smithfield Foods, the world’s biggest pork processor, said that they couldn’t slow down line speeds.

Kenneth Sullivan, Smithfield chief executive, said, “For better or worse, our plants are what they are,” as if capitalist profiteering — with its deadly consequences for workers — is an inevitable and irreplaceable part of production. “Four walls, engineered design, efficient use of space, etc. Spread out? OK. Where?” he blithely told a Senate inquiry.

It will take a fight for workers control of production to ensure spacious and safe working conditions. Priorities and line speeds must be set by those who work, not those who run production to maximize profit-taking.

Thousands of Filipino workers desperately crowded into a sports arena in Manila, the Philippines’ capital, July 25 after a government transportation program was inundated with workers trying to return to their home provinces. Millions there have been caught up in one of the strictest and longest lockdowns, enforced by President Rodrigo Duterte.

In an email to the Militant, teacher Genoveva Valdez said, “What happened at the Rizal Memorial Baseball Stadium is just one of the many poorly planned responses” by the government. A huge number of working people are “affected by the joblessness. They’re leaving Manila because there’s nothing left for them in the city.”

In addition, there are almost 10 million Filipino workers overseas who send more than $30 billion in annual remittances to help to sustain family members in the Philippines. Now some 700,000 are, or will be, jobless, adding to the economic slump.

Working people everywhere face the same fight — to defend our interests against the bosses’ attacks on our jobs, wages and conditions and to extend solidarity to workers’ battles.

BATH, Maine — Over 300 spirited strikers, family members and supporters of the Bath Iron Works Shipbuilders strike gathered outside the International Association of Machinists Local S6 union hall, across the street from the shipyard here, for a rally and…

MONTREAL — For the second time this month, some 1,125 longshoremen at the Port of Montreal — members of Canadian Union of Public Employees Local 375 — have gone on strike in their ongoing fight for a new contract. A…

Unions in Mauritius fight for equal pay for immigrants

The Confederation of Workers in the Public and Private Sectors (CTSP) in Mauritius, backed by other unions, is campaigning for the largely immigrant workforce in the textile and garment industries to get the national minimum wage of 9,400 Mauritian rupees…