As the nominating conventions of the Democratic and Republican parties meet, working people face depression-like conditions with mounting job cuts, the scourge of “for profit” health care in a pandemic and employers’ attacks on wages and working conditions. 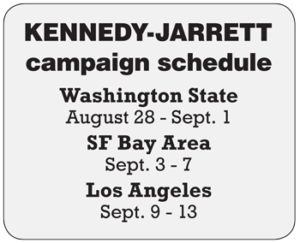 Another 1.1 million filed for unemployment pay last week. Only once in the last five months has that number dipped below a million. Nearly 30 million workers are drawing on unemployment programs. At least 4 million workers who are still on the job have had their pay cut, and countless more face lower incomes with their hours slashed. Evictions and foreclosures are rising. Thousands of restaurants and other small businesses have been wiped out altogether.

La Jordana food pantry in Queens, New York, used to get groceries to 1,000 families a week before the pandemic. Now it tries to serve 10,000.

In the midst of this crisis there is no agreement between the two ruling parties on a new aid package.

Workers need a union movement in every workplace, to fend off daily attacks by the bosses. We need to build a powerful working-class movement to fight for a government-funded public works program to create jobs at union pay for all those thrown out of work, building medical centers, housing and other things working people need.

This kind of fighting labor movement would be the basis for workers to organize our own political party, a labor party, to strengthen our struggles and fight to take political power into our own hands.

At their convention, the Democrats promoted one central theme — the problem is Trump. They call on progressives, Republican Never-Trumpers, and democratic socialists to unite to drive him out of the White House. Once in office, Biden promised, his administration will “rebuild our economy.” But he offered no proposals to reverse the ruinous impact of unemployment today. A few days later, he told ABC News he’s ready to “shut down” the entire economy until the virus goes away.

The Democrats’ anti-Trump theme, backed by the middle-class left, glosses over deepening divisions in their ranks. Earlier this year, Rep. Alexandria Ocasio-Cortez, a member of the Democratic Socialists of America, told New York magazine, “In any other country, Joe Biden and I would not be in the same party, but in America we are.”

The democratic socialist wing of the Democrats would like to take over the party — something the ruling capitalist families the party serves will most certainly prevent. These forces will have to form a party of their own, equally loyal to defending capitalism but with a more radical and socialist “face.”

The Trump campaign hopes to make his management of the capitalist economy a central issue in his reelection campaign. At the Republican convention Aug. 24 Trump said he  had produced “the most successful economy in the history of our country.”

Another major theme for the Trump campaign was highlighted by Vice  President Mike Pence, who said, “Law and order is on the ballot.”

The Democrats and the liberal media do damage to the movement against police brutality by trying to credit anarcho-radicals engaged in damage and looting as part of the “protesters.”

In a recent speech, Kamala Harris, the Democrats’ candidate for vice president, prettified these forces, referring to them as “mothers and veterans.” But protesters against cop brutality in Portland, Oregon, have been attempting to separate their actions aimed at winning prosecution of cops from the destructive violence of antifa and other forces that alienate working people.

Many workers are turned off by calls by liberals to “defund the police,” as they face gang warfare and murders in cities across the country. They are outraged by the cop killings of Breonna Taylor and many more, and are ready to fight for justice in those cases, but don’t want to be left on their own when bullets start flying in their neighborhoods.

The Republican Party has been changed by Trump’s presidency. He was elected in 2016 not as a Republican, but as an outsider campaigning against the “swamp” in Washington. His term in office has been marked by his politics, not those of traditional Republicanism. If he loses in November, Republicans will need to rebuild the party.

Between now and November, SWP campaign supporters will reach far and wide among working people to introduce its candidates and working-class program. They will continue to work with co-workers on the job to organize a union movement and build solidarity with strikes and other struggles in the interest of working people. This is the road forward to build a working-class movement that can lead millions to take power into our own hands. 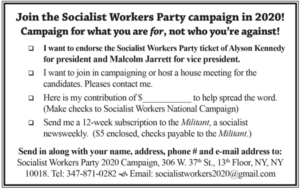 Demand gov’t pay benefits to those without jobs now!

‘Workers need a union in every workplace and a labor party!’

As the vitriol between the two main capitalist candidates for U.S. president — Donald Trump and Joseph Biden — heats up with two months until the election, the Socialist Workers Party presidential ticket of Alyson Kennedy and Malcolm Jarrett offers…