After the Florida Department of Corrections Literature Review Committee upheld the banning of Militant issue no. 30, David Goldstein, the paper’s attorney, filed an appeal Aug. 24 challenging the ruling. The Militant was also informed that authorities at the same state prison in Raiford, Florida, had banned issue no. 31.

“Prison officials are targeting the Militant because of its political viewpoints,” writes Goldstein in his appeal, “in violation of the First Amendment rights of both subscribers and publishers.” Their suppression of issue no. 30 “is arbitrary, capricious, discriminatory, unconstitutional.”

Prison authorities had informed the Militant Aug. 8 that issue was impounded because of an article entitled, “Prisoners Demand Release from Overcrowded Jails.” It’s a news story about efforts in California to press for the release of inmates in the overcrowded state prison system, where over 5,800 inmates statewide have contracted COVID-19. Similar coverage has appeared in newspapers in Florida and nationwide.

Prison authorities claim this article is “dangerously inflammatory in that it advocates or encourages riots, insurrection, rebellion, organized prison protest, disruption of the institution, or the violation of the federal law, state law or Department rules.”

“The justification offered for the ban is unsupported by the article’s content,” Samuel Morley, general counsel of the Florida Press Association, wrote in an Aug. 18 letter to the Literature Review Committee opposing the banning of issue no. 30. “We do not believe it advocates any facility disruption or violation of the law,” he adds. “Rather, the decision appears to be arbitrary and irrational.”

In response to a question from the Militant, Morley said he was not aware of impoundments of any other papers, like the Miami Herald and Orlando Sentinel that had carried coverage of COVID-19 outbreaks in Florida prisons. The Herald’s coverage included a report of a prisoner on a hunger strike. It wasn’t banned.

Florida state prison authorities gave the same reason for impounding issue no. 31, claiming the objectionable article was “Workers Oppose Federal Cops, Antifa Violence in Portland.” The article opposes looting and violent attacks by groups like antifa in Portland, Oregon, and explains how this is an obstacle to building a broad-based movement to press for prosecution of cops who brutalize and shoot working people. Again, this is a topic the media has covered extensively. The Militant plans to appeal this suppression also.

Word about recent impoundments of the Militant has gotten around among prisoners. “I am an inmate currently housed with a recipient of your newspaper,” a prisoner from Florida wrote to the Militant. “However, issue no. 30 was denied. I am a prison legal advocate and will grieve this issue at this institution,” he said, adding, “I would also like to receive the newspaper.”

Supporters of political rights have been contacting the Literature Review Committee urging them to overturn these impoundments. Among those that have sent letters are the Florida American Civil Liberties Union and The Reporters Committee for Freedom of the Press.

Over the past several years the Militant has fought, and in most cases been victorious in overturning impoundments by Florida prison authorities. From mid-2017 to August 2019 they impounded almost three dozen issues, more than one-third of Militant issues printed over that time.

They then stopped banning the paper for about eight months, until May of this year when issue no. 13 was impounded. Prison authorities claimed pictures of workers protesting with raised fists were “gang signs.” This was reversed. “No explanation,” Goldstein wrote in the appeal, “let alone a reasoned one, is ever given by the censoring FDOC officials as to what they actually find objectionable and why.”

“Workers behind bars have the right to read different viewpoints, to think for themselves and form their own opinions about political questions,” said Militant editor John Studer. “And the Militant is guaranteed the right to freedom of the press, to be able to send our paper to subscribers behind bars.”

Studer urged workers, unions, church groups and civil liberties organizations to write to the Literature Review Committee asking that these impoundments be overturned. 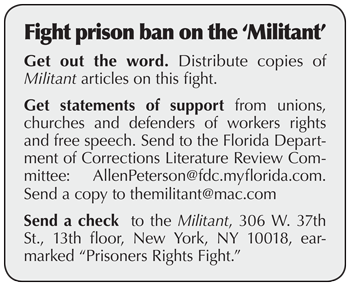