Supporters of both the rights of prisoners and freedom of the press are stepping up their efforts to urge Florida prison officials to reverse the banning of four recent issues of the Militant. The state’s Department of Corrections Literature Review Committee rejected the Militant’s appeal over the banning of the first of these issues, Vol. 84, No. 30.

“The impoundment and rejection were upheld,” Dean Peterson, the committee’s administrator, wrote Militant  attorney David Goldstein. “As a result of that decision the issue will not be allowed into Florida correctional institutions.” This affects all of the state’s 143 prison facilities.

Protests against the impoundments have come from both prominent political rights groups like the American Civil Liberties Union in Florida and press freedom organizations like the Reporters Committee for Freedom of the Press.

“We urge Florida State Prison authorities to cease the arbitrary impoundment” of the Militant, wrote Justin Mazzola, deputy director of research for Amnesty International USA, in a Sept. 21 letter to the committee.

Peterson’s letter informing the Militant  of the committee’s decision was dated Aug. 28, but it wasn’t postmarked until Sept. 16. So the Militant  didn’t even know about it until three weeks after it was made.

As with the three subsequent impoundments of the paper — issue nos. 31, 33 and 34 — the committee’s decision give no clear reason what prison authorities found objectionable in Militant  articles.

They just claim that each of the four issues are “dangerously inflammatory” and “advocates or encourages riot insurrection, rebellion, organized prison protest, disruption of the institution, or the violation of the federal law, state law, or Department rules.”

Issue no. 30 was confiscated because of the article “Prisoners Demand Release from Overcrowded Jails.” It describes a peaceful rally in California by inmates’ family members and supporters urging the state government take steps to relieve the dangerous overcrowding in prisons there amid the COVID-19 pandemic. It also reports on a letter from a prisoner describing conditions where he is incarcerated.

The spread of coronavirus amid widespread prison overcrowding has been widely covered in Florida and nationwide. The Miami Herald, for example, at the end of July — the same time that the Militant  article appeared — ran articles focused on the abysmal conditions within Florida’s prison system. The paper’s headlines included, “South Florida Prison Tallies Most Inmate COVID-19 Deaths Among Florida Facilities” and “‘It’s Apparent that They’re Failing’: As Florida Inmate Deaths Soar, Families Feel Dread.”

Issue nos. 33 and 34 were banned for articles reporting on the Militant’s efforts to reverse the impoundment of issue no. 30. Issue no. 31, however, was banned for an article that opposed violence in Portland, Oregon, by both antifa and federal cops. These are also questions that have been widely covered in the press.

The Militant  has appealed the banning of these three issues also, but hasn’t yet received a response from the Literature Review Committee.

The Militant  has fought an ongoing series of battles against prison bans on the paper in the last few years, with growing support, and has won the vast majority.

“I urge you to lift the ban on the Militant newspaper in Florida prisons,” Martin Knaeble, a baggage handler for Delta Airlines in Minneapolis, wrote Sept. 27. “I’m sure you value the constitutional right of freedom of the press and freedom of speech. Please do the right thing!”

“More letters are needed to urge Florida prison officials to overturn their bans,” said Militant  editor John Studer. “What’s at issue here isn’t our reports on prison conditions — this is widely covered and hasn’t led to Florida officials carrying out wholesale suppression of the media. The fact is, Florida prison authorities don’t like our political views.

“The Militant  will never stop fighting for the right of prisoners to read different points of view and form their own opinions,” Studer said. “Our growing numbers of subscribers behind bars look to us to defend their rights.” 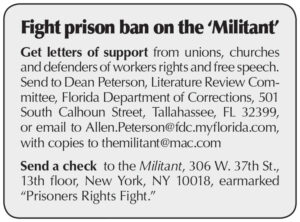 Other groups that have sent letters calling for lifting the ban include the Florida Press Association, News Leaders Association and PEN America. A growing number of individuals have done so as well.