The international eight-week drive to win 1,200 new readers to the Militant and sell the same number of books by Socialist Workers Party leaders and other revolutionaries is off to a strong start. The drive is intertwined with expanding the reach of the Socialist Workers Party presidential campaign of Alyson Kennedy and Malcolm Jarrett. At the same time, the SWP is carrying out its 2020 Party-Building Fund, this year with a higher goal of $120,000.

SWP candidates and campaign supporters are introducing the candidates and the party’s program, the paper and the books to working people on their doorsteps in cities, towns and rural areas; at protests by Amtrak workers opposing layoffs; to workers fighting boss attacks; at plant gates; at actions by independent-owner truck drivers squeezed by brokers and big freight companies and more.

Workers they meet know they face the worst capitalist economic and social crisis of their lifetimes. Many are glad to meet the Socialist Workers Party and learn what it says working people can do to confront this crisis.

SWP campaigners joined 75 Amtrak workers in front of Union Station in Los Angeles Sept. 30 protesting bosses’ threats to furlough 2,000 workers. Similar rallies took place in New York, Chicago and Washington, D.C. Like the airlines, Amtrak says a steep drop in the number of passengers as a result of the government-imposed lockdowns means they’ve got to put workers out on the streets.

Zenora Hicks, who has worked for Amtrak for three years, told the Militant, “One person deals with three cars. Triweekly service, instead of daily, with double occupancy. We don’t need to be furloughed. Our co-workers need us.”

SWP campaigners have been highlighting the need for workers and our unions to fight for cutting the workweek with no cut in pay to prevent layoffs while protecting workers’ income.

Hicks was one of four participants in the Los Angeles demonstration who bought subscriptions to the Militant. Two also bought books: Malcolm X, Black Liberation, and the Road to Workers Power by SWP National Secretary Jack Barnes and In Defense of the US Working Class by SWP leader Mary-Alice Waters.

SWP gubernatorial candidate Henry Dennison and supporters took part in a rally of more than 80 people in front of the Twin City Foods plant in Pasco, Washington, Oct. 2. Workers at the plant, which packs frozen vegetables, are fighting to win United Food and Commercial Workers union representation.

“There are some 560 workers, but only about 170 are ‘permanent,’” Jorge Villegas, who works on the plant floor, told Dennison. Dennison told Villegas how the Militant built solidarity for workers on strike in fruit packing plants in the Yakima Valley earlier in the year, and that the paper would be reporting on the fight there as an example of how workers need a union to defend themselves from boss attacks.

Villegas subscribed to the Militant and got a copy of Tribunes of the People and the Trade Unions, which explains why it’s workers and our allies who through our struggles can and will lay the foundations for a world built on solidarity among working people worldwide. 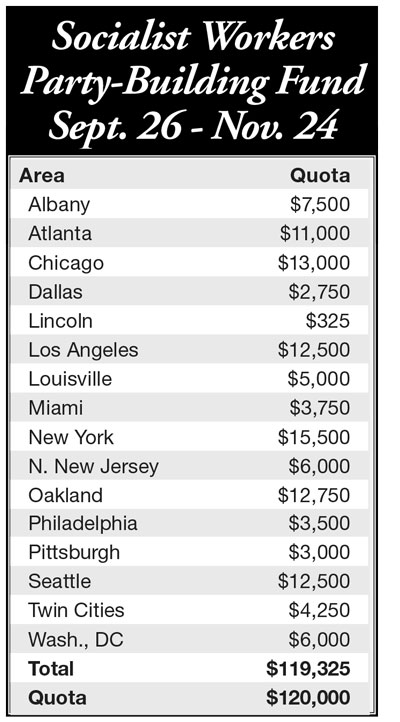 In South San Francisco, Joel Britton, Socialist Workers Party candidate for Congress in the 13th District in California, knocked on the door of Richard Ortega Oct. 3. Ortega, a landscaper and gardener who works seven days a week, liked the SWP’s call for workers to fight for a government-funded public works program to put millions back to work. He signed up for a Militant subscription.

Samir Hazboun, SWP candidate for U.S. Congress in the 3rd District in Kentucky, and supporters campaigned at the plant gate of the GE Appliances complex in Louisville where 3,800 workers produce household appliances. The workers, members of IUE/CWA Local 83761, had voted down the bosses’ contract offer Sept. 16. One worker bought a subscription and Tribunes of the People and the Trade Unions, and four got copies of the Militant.

SWP members in Chicago are setting a good example getting an early jump on the SWP Party-Building Fund. “We already have $6,800 pledged, over half our quota of $13,000,” Ilona Gersh told the Militant. “And we’re reaching out to win new contributors to the party. The SWP depends on contributions large and small from workers and farmers to finance its political work.”

Starting this week the Militant is running weekly charts on the subscription drive and SWP Fund. Please send in reports of your progress for this column.

Tell your co-workers, friends and family about the paper, the books and the fund. To join in the effort see the directory.