MADISON, Tenn. — “We watched the Trump-Biden presidential debate,” Allison Kultaeva told Socialist Workers Party presidential candidate Alyson Kennedy, as she was campaigning in this Nashville suburb Oct. 3. “It was terrible! I’m so happy to find out there’s a different choice.”

Like many others the SWP candidates are meeting in the final weeks of the 2020 campaign, she is repelled by candidates of the bosses’ parties and interested in learning more about the SWP, a working-class party that starts from the capacities of working people to organize together and fight to change the worsening conditions we face.

Kultaeva, a former truck driver, liked Kennedy’s call for workers to form their own party, a labor party. “That would be kind of like a union for everybody,” she said. “That’s what workers need.”

A labor party will grow out of the battles we fight on the job, Kennedy said. It will be built through the unions fighting for a federal government-financed public workers program to put millions to work at union-scale wages, to create jobs building schools, hospitals and other things workers need.

“The only way to get there is to stand together on the job and begin to fight for higher wages and better working conditions, like the farmworkers in Washington state who I recently visited,” the SWP candidate said. These workers at a half-dozen packinghouses in the Yakima Valley struck for safer working conditions in May and June, gained some improvements, and now are fighting to win union recognition.

“Workers are not pushovers even when we don’t have a union yet,” Kennedy, who works as a cashier at a Walmart in Dallas, said. “At many Walmart stores, workers have fought against speedup and for safety on the job. These experiences give us confidence that we can rebuild the union movement around the country.”

On Oct. 4 Kennedy and campaign supporters John Benson and Lisa Potash campaigned at a truck stop in southeast Atlanta. They met Ashley Lawton and her husband Randy, an owner-operator from Lexington, South Carolina.

“I have to bid lower to get a load, to keep busy with work,” Randy Lawton said. “My combined truck mortgage and insurance is $1,200 a week. The dispatcher owns you!”

“And the cost of living keeps going up and up,” added Ashley Lawton.

That’s why every contract should have a cost-of-living clause that raises wages whenever prices go up, SWP candidates say. Kennedy told the Lawtons that she and Jarrett went to trucker protests in Washington, D.C., earlier this year. “It’s through these kinds of actions that working people can unite and begin to change things,” Kennedy said.

“The problem is the divisions in the country, between Democrats and Republicans, between Black and white,” Ashley Lawton said. 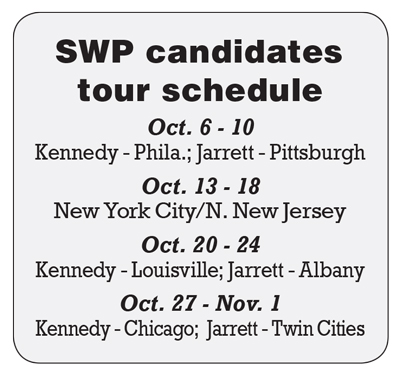 There are two main classes, Kennedy said: the capitalist class and the working class. The bosses have their twin parties, the Democrats and Republicans, to defend them, she pointed out, and working people need our own party.

“As working people begin to organize and fight together to change our situation, we will build solidarity and unity that can overcome the divisions the bosses use to keep their system of exploitation and oppression going,” Kennedy said. “By acting together, we’ll gain confidence in ourselves and each other.”

Tremendous advances for working people were registered through conquests won during the fight for Black rights in the 1960s and 1970s, Kennedy noted. “In many ways working people are more united than ever before. We saw that so clearly in the protests earlier this summer against police brutality, which drew people of all backgrounds into the streets in big cities and small towns.”

But those protests “have been cut short,” Kennedy said, “by antifa, Black Lives Matter and other forces that carried out looting, trashing and other anti-working-class acts that drive people away.”

Lisa Potash contributed to this article.

“The cuts at Amtrak not only mean people lose their jobs, but the workplace stops being different generations,” David McClain, a train engineer on the Virginia Railway Express commuter railroad and member of SMART-TD Local 1933, told Jarrett at the Sept. 30 Amtrak protest of 75.

“The bosses are responsible for the layoffs,” Jarrett said. “That’s why the unions have to lead a fight for jobs. The workweek should be cut with no cut in pay, to defend jobs. The full cost of ensuring jobs should come from their profits, not on the backs of workers and our families.”

When Jarrett and campaign supporters went to the fairgrounds in Fredericksburg, Virginia, Oct. 3, owner-operator truckers were preparing a cookout. The previous day they had parked their 30 rigs on the National Mall in Washington in a “Ten Four DC” action. When truckers say “10-4” — radio shorthand for OK — it’s a way of saying “I’ve got your back.”

“If you got rid of the ELD [electronic logging device] independent truckers would convoy you to the White House,” Jerry Campbell, from Union, West Virginia, with 32 years truck driving, told Jarrett. The devices track drivers’ movements, to aid federal agencies in imposing regulations on the number of hours drivers can operate their vehicles. The devices add to hated bureaucratic red tape that blocks owner-operators from making their own decisions about how to work safely.

This comes on top of the disastrous impact on truckers’ livelihoods as brokers use heightened competition among truckers for work to cut the rates they pay drivers. This has accelerated during government lockdowns.

Many drivers also face rising indebtedness as a consequence of the way the big trucking companies force owner-operators to cover all their expenses.

“Three of my friends just had to get rid of their rigs,” Campbell said.

“The independent operators are like the small farmers. We have very little control, and we take all the risks,” trucker Artie Daniels from McKenney, Virginia, told Jarrett. “If we don’t stand up, they will roll over us.”

Daniels described joining thousands of farmers demanding parity prices for their crops at least equal to costs of production, at a 1979 tractorcade in Washington.

Unlike the capitalist candidates, who all promise to “solve” problems working people face, the SWP presents demands working people can fight for together that advance our own interests. And they present a course of action to overcome divisions the bosses foster, Jarrett said.

“The Socialist Workers Party is a voice for workers and all those exploited and oppressed by capital,” Jarrett said. “We call for building a labor party. Together we can chart a course to take political power out of the hands of the capitalist rulers and establish a workers and farmers government.” 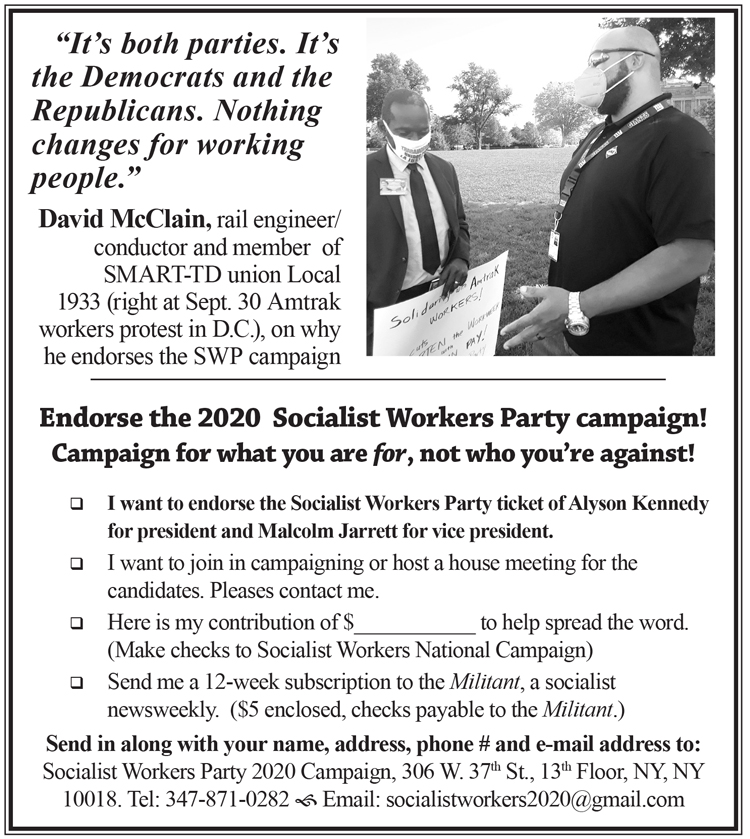 “You’re in good hands at Allstate,” the familiar TV commercial says. But the bosses of this large insurance company announced this week they are eliminating 3,800 workers. Allstate is one of a number of big capitalist outfits slashing its workforce…

For a shorter workweek with no cut in pay to stop job cuts!

This statement was issued by Alyson Kennedy, Socialist Workers Party candidate for president, Oct. 7. In the hands of the Democrats and Republicans, the two parties of ruling capitalist families, billions of dollars in government handouts have flowed into the…