SWP candidates and campaigners have been meeting thousands of workers like Swartz coast to coast who are fed up with the capitalist parties.

“The Democrats and Republicans don’t offer anything to working people, and the vast majority of working people know that,” Jarrett tells them. “That’s why workers need our own party, a labor party. It would be a real voice for working people, it would grow alongside a revitalized, expanding union movement, and would mobilize working people around issues like the fight against police brutality.”

Reporter David Dye and photographer Tanner Mondok from the Herald, a daily paper here, were accompanying Jarrett and Ferguson as they spoke with working people on their doorsteps. They saw the response the SWP candidates are getting and joined in the discussions with working people who took campaign material, signed up to get the Militant and bought books by Socialist Workers Party leaders and other revolutionists.

Dye asked whether the party’s jobs program was like measures enacted by President Franklin Delano Roosevelt during the 1930s Great Depression. What the SWP is putting forward is “the opposite of what Roosevelt carried out,” Jarrett said.

The party’s platform calls on workers and their unions to fight for a government-financed public works program “that would put workers to work building the things we need and at union-scale wages,” such as hospitals, schools, decent housing, child care centers and mass transit. To fight layoffs, the platform raises the need to fight for a shorter workweek with no cut in pay, to spread around the available work.

The work projects organized by the Roosevelt administration were mostly make-work programs that robbed workers of their dignity and paid them barely enough to stay alive. The government did everything in its power to block these workers from forming unions.

Jarrett and Ferguson told those they met about the need to give solidarity to some 400 members of the United Steelworkers union on strike at the NLMK rolling mill in nearby Farrell, fighting against bosses’ demands to raise workers’ health care costs.

Swartz is also a member of the United Steelworkers union. She told the SWP candidates she knew some of the strikers and has been talking about their fight with her co-workers at the stamping mill. “Some say those striking are just being bullheaded,” Swartz said. “If I went on strike right now I’d just be hard-pressed.” The question, she said, is do you fight “or do you just bow down?”

Jarrett agreed. “Working people can be transformed in struggle. We’re capable of anything, including taking political power into our own hands and wielding it for all humanity.”

Jarrett had visited the striking Steelworkers on their picket line the day before.

“We’re fighting to continue to get yearly raises. The company wants to put an end to that,” Elton Brown, one of the strikers, told Jarrett. “I don’t want to give up something I’ve had for the last 21 years.” Members of United Steelworkers Local Unit 1016-03 have been on strike for seven weeks.

The company doesn’t want people outside the immediate area to know about the strike, Brown said. “The company wants to keep it right here in the [Shenango] valley.”

When working people hear about the strike they will want to back it, Jarrett said. He told Local 1016-03 President Jim Wells that he and Alyson Kennedy, the party’s candidate for president, will be talking about the strike and encouraging solidarity as they campaign around the country.

SWP candidate in Philadelphia: ‘Wages should rise with inflation’

BY LEA SHERMAN
PHILADELPHIA — “How is it that the prices of everything are higher, and our wages are the same?” Carlos Lozada, a home health care worker, told Socialist Workers Party presidential candidate Alyson Kennedy when she and other campaigners knocked on his door here Oct. 10.

The capitalists take advantage of every opportunity to make us pay for their crisis, Kennedy said. The party’s platform says that workers and our unions should fight for automatic cost-of-living increases, so that “when prices go up our wages should go up,” Kennedy said. “Everyone without a job should get unemployment benefits, whether they have government-recognized work documents or not, for as long as they can’t find a job.”

Kennedy also spoke with Kim Pannella, a cook for 26 years at a catering company until the owners shut down the business, leaving 11 workers without a job, severance pay or any benefits.

Pannella’s husband works at a large union-organized pharmaceutical company. They’ve been working without a contract since February, and have gone for quite a while without a pay raise, even though the company is raking in profits, she said.

Pannella told Kennedy that she supported Donald Trump in the 2016 election, and will vote for him again, even though “I do not like the man.”

She told Kennedy she agreed with Trump’s tariffs on China, and credits him with “bringing back some jobs.” 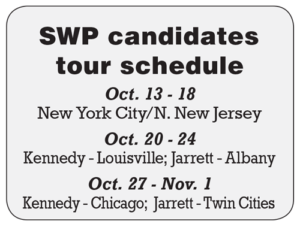 Whatever party is in power, whether they back so-called free trade or protectionist tariffs, it makes little difference to workers,” Kennedy said. “Neither Trump nor Biden can prevent the world economic slowdown. The Trump administration claims its policies have created more jobs, but what kind? The sort of jobs we have had for decades with low wages and a lot of part-time work. The problem we face is the capitalist profit system.”

Pannella said she liked the campaign platform’s call for a jobs program to put millions back to work at union-scale pay. “Why don’t they have trade schools, vocational schools anymore?” she asked. “I went to school for cosmetology. And I became a cook. I learned this at vocational school.”

“The schools aren’t organized to educate,” Kennedy said. “They are organized to try to make workers be obedient and accept our place in their system.”

“The working class is the only force that can change the conditions we face,” Kennedy said. “We produce everything. We need to bring a workers and farmers government to power, and use the wealth that we produce to begin solving the crisis that faces humanity.”

Pannella got the titles Are They Rich Because They’re Smart? Class, Privilege, and Learning Under Capitalism and The Clintons’ Anti-Working-Class Record: Why Washington Fears Working People, both by SWP National Secretary Jack Barnes, along with a subscription to the Militant.

See subscribe to get a subscription to the Militant or contact the Socialist Workers Party 2020 Campaign at socialistworkers2020@gmail.com.

Cut the workweek with no cut in pay to stop layoffs!

This statement was released by Alyson Kennedy, Socialist Workers Party candidate for president, Oct. 14. Working people need to join together to fight for protection from the impact of the spreading capitalist social and economic crisis and to use all…