In an important victory for political rights, Florida prison officials Sept. 24 overturned their suppression of Militant issues nos. 33 and 34, and then two weeks later reversed their ban on no. 38.

Each of these issues had been suppressed for reporting on growing support for overturning a series of impoundments of the paper. But the response by a broad array of organizations and individuals sending letters to the Department of Corrections Literature Review Committee helped bring pressure to bear to get prison authorities to back off.

However, at that same Sept. 24 meeting the committee upheld a ban on issue no. 31. What is most significant here is that for the first time they gave a specific reason. Their “reason,” however, confirms that they banned no. 31 because they disagree with the paper’s political viewpoint. This is an explicit violation of First Amendment protections of freedom of speech and of the press.

In their Sept. 24 “notice of rejection” of the issue, officials at Florida State Prison in Raiford said the article, “Workers Oppose Federal Cops, Antifa Violence in Portland,” “is dangerously inflammatory” and that it “encourages, riot, insurrection, rebellion, organized prison protest” or “disruption of the institution.”

That accusation seems strange to anyone reading the article since it opposes both looting and violent attacks by groups like antifa in Portland, Oregon, as well as the government’s use of federal police and National Guard to attack political rights.

In a Sept. 28 letter to Militant attorney David Goldstein, Dean Peterson from the committee wrote that they rejected the appeal because “the language of the cited article calling for the replacement of cops and the entire justice system was sufficiently inflammatory to uphold the impoundment and reject the publication.”

This is a reference to the article’s last paragraph, which reports that Socialist Workers Party candidates in the 2020 election call for working people to build their own party, a labor party, that would help mobilize millions to bring to power a workers and farmers government. Replacing the capitalist government, the article explained, would open the door for uniting people to replace today’s entire criminal “justice” system, which exists to enforce capitalist exploitation and oppression. There is nothing “inflammatory” about the reporting.

“Florida prison officials have no right to suppress any issue of the paper because they disagree with its reporting on the political position of candidates running in the 2020 election, or any other political view,” said Militant editor John Studer. “Daily newspapers and other media frequently carry articles on the debate over police brutality, the criminal ‘justice’ system and the widespread protests against police brutality. Prisoners have the right to read and consider a wide range of views and to form their own opinion.” 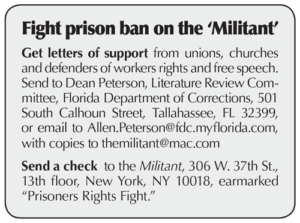 The fight to defend the rights of the Militant and its readers behind bars is a cutting edge in the broader battles in defense of political rights. That’s why the Florida Press Association, Reporters Committee for Freedom of the Press, Amnesty International USA, American Civil Liberties Union – Florida, PEN America, the News Leaders Association and other individuals and organizations have joined in calling on Florida officials to overturn the bans.

“It is crucial that this fight over the rights of the press are public and publicized, to continue to press Florida officials to deliver the paper to our subscribers behind bars,” Studer said. “Join us in urging them to reject their explicit — and unconstitutional — attack on the paper’s reporting in issue no. 31.”

Send letters to Dean Peterson, Literature Review Committee, Florida Department of Corrections, 501 South Calhoun Street, Tallahassee, FL 32399 or via email at Allen.Peterson@fdc.myflorida.com, with a copy to the Militant  at themilitant@mac.com.