Socialist Workers Party members and supporters of Alyson Kennedy and Malcolm Jarrett, the party’s presidential ticket, are taking the Militant and the campaign to fellow workers in cities large and small, as well as to farm areas, from doorsteps to taxi lines and truck stops, to strike picket lines and social protests.

They are using the Militant’s eight-week international drive underway now and through the elections to sign up subscribers and get books by party leaders and other revolutionaries into the hands of working people. They are also winning new contributors to the SWP Party-Building Fund, which runs simultaneously. And they’re finding real interest in a working-class paper and fighting campaign. The drive is ahead of schedule.

Members of Communist Leagues in Australia, Canada, New Zealand and the United Kingdom are taking part in the drive as well.

At the end of the second week, campaigners report totals of 396 subscriptions (well ahead) and 300 books (right on target).

No worker should die on the job

Rebecca Williamson, SWP candidate for Congress in Washington’s 9th CD, spoke with roofer Adolfo Flores on his doorstep in Burien south of Seattle. Flores was injured on the job and is eligible for job training to find a new trade. “The Washington state government only covers half the cost of retraining,” he told Williamson. “How am I going to pay the other half?”

“No worker should be maimed or killed on the job,” Williamson told him. “Workers need to stick together to demand and enforce safe working conditions.” We need to fight for workers’ control of production, the only way we can really enforce safety on the job.

And workers need to demand that everyone out of work gets union-scale unemployment benefits until they are working again, she said.

Williamson pointed to the example of fruit packinghouse workers in the Yakima Valley who were on strike earlier in the year for safer working conditions, better pay and a union. She also told Flores about a fight for union representation also taking place at the Twin City Foods vegetable plant in Pasco.

“I used to work over there,” in the Yakima Valley, Flores said. He subscribed to the Militant, and picked up Tribunes of the People and the Trade Unions, a collection of writings by revolutionaries Karl Marx, V.I. Lenin, Leon Trotsky, and SWP National Secretary Jack Barnes, as well as In Defense of the US Working Class and Is Socialist Revolution in the US Possible?  both by SWP leader Mary-Alice Waters.

Jacob Perasso and Abby Tilsner, SWP candidates for Congress in upstate New York, met Elizabeth Hilder campaigning at a Walmart parking lot in Rutland, Vermont, Oct. 11. Hilder told them she quit her supermarket job to home school some of her children due to pandemic restrictions on school reopening.

“The question that faces workers is how to reopen schools safely,” Tilsner told her. “The only way to ensure that is for teachers and other school workers fighting to control conditions through their unions, in collaboration with parents.” A government-funded public works program could put people to work repairing and building classrooms, installing proper ventilation systems and other steps to allow students to go to class in person.

Hilder bought a subscription and a copy of In Defense of the US Working Class. Campaigners sold 12 subscriptions and seven books in Rutland and nearby towns, as part of talking to workers on their doorsteps and visiting dairy workers at their housing on the farm.

“I make $12 an hour. It’s not enough,” 31-year-old moving company worker Quinton Goolsby told Rachele Fruit, SWP candidate for U.S. Senate from Georgia, on his doorstep in Macon. “I’m not into politics — I’m into what’s real.” But when she showed him the SWP’s 2020 campaign platform he liked the section that calls for building the labor movement in every workplace and breaking with the Democratic and Republican parties. He subscribed to the Militant and bought Are They Rich Because They’re Smart?  also by Jack Barnes. 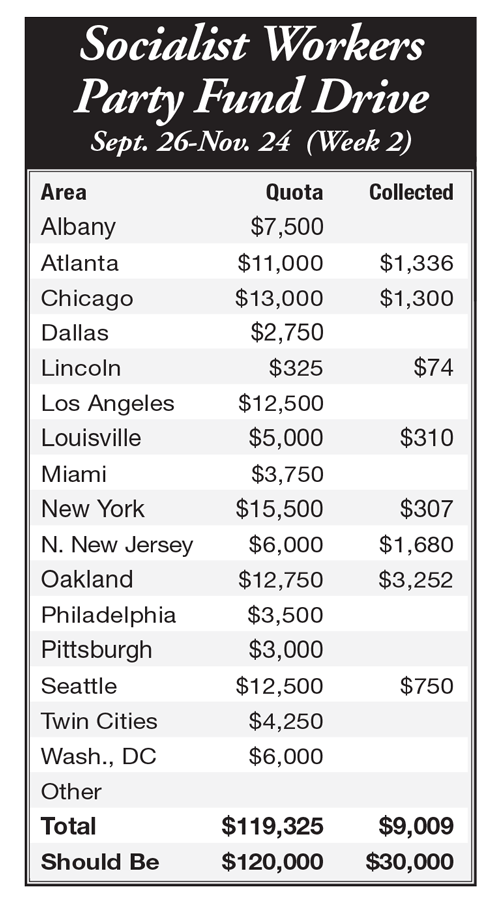 In Louisville, Kentucky, two Walmart co-workers of Samir Hazboun, SWP candidate for Congress in the 3rd District, came to the Oct. 9 Militant Labor Forum where he spoke on the need for solidarity with striking workers at the Dominion grocery store chain in Newfoundland, Canada, and at DSI Tunneling in Louisville. Hazboun recommended reading Malcolm X, Black Liberation, and the Road to Workers Power by Barnes. Both co-workers bought the book, subscribed to the Militant, and picked up some other books on special.

“We’re getting a tremendous response to the SWP Party-Building Fund,” Ned Measel, fund organizer in Louisville, reports. “We have $4,628 pledged toward our quota of $5,000, which we thought would be challenging until we started asking for contributions. Seventeen people have pledged so far, including two first-time contributors. Now we’re working on collecting it and raising more to help the Socialist Workers Party meet growing opportunities.”

The $120,000 fund has a higher goal than in the last few years, reflecting greater opportunities and interest in the party today.

Tell your co-workers, friends and family about the Militant, the value of all the books on special offer, and the fund. To join in the effort see the directory.