Car and bike caravans, pickets and rallies to protest Washington’s more than 60-year-long economic war on Cuba are planned Aug. 29 in a half dozen U.S. cities as well as in Canada, the United Kingdom and other countries. Some will take place the day before. The monthly caravans, which began last year, are helping to win new support to the fight against the U.S. government embargo.

Every U.S. president — Democrat and Republican alike — has sought to punish the Cuban people for overthrowing the U.S.-backed dictatorship of Fulgencio Batista on Jan. 1, 1959, dismantling the capitalist regime’s military, police and state machinery and replacing them with a workers and farmers government.

Led by Fidel Castro, Ernesto Che Guevara and others, working people in Cuba made ever-deeper inroads against capitalist exploitation and property relations, transforming themselves in the process. They recognized through their own experience — and were determined to defend — the socialist character of their revolution and the Marxist character of their leadership. The depth of those changes is why six decades later the U.S. rulers have been unable to overturn it.

They used their new government to carry out a thoroughgoing land reform that guaranteed land for thousands of peasant farmers. They outlawed racist discrimination and enforced it. Tens of thousands of young people went to the countryside to teach people to read and write, eliminating illiteracy in a year, and changing forever both teachers and students.

Workers took increasing control over production in the nationalized factories. They became more conscious of their class interests, more confident in their ability to organize society, more determined to extend solidarity to others fighting imperialist domination throughout Latin America and around the globe.

What the U.S. rulers fear most is that working people elsewhere, especially in the United States, will learn from the Cuban Revolution and organize to emulate it.

The Joseph Biden administration has been tightening the U.S. rulers’ economic and political war against Cuba, the effects of which are exacerbated by today’s worldwide capitalist economic crisis and the COVID-19 pandemic, to tighten the screws on the Cuban people and their revolution. He has built on and expanded the measures imposed by the Donald Trump administration before him.

On Aug. 19 Homeland Security Secretary Alejandro Mayorkas met with a range of counterrevolutionary groups in Miami to deepen their support for the administration’s anti-Cuba measures.

The Aug. 28 and 29 actions are an opportunity for all those who oppose the U.S. embargo to join together to get out the truth about Cuba, to demand that all the sanctions and travel restrictions on Cuba be lifted, and to demand Washington get out of Guantánamo, which it has occupied for over a century against the will of the Cuban people. See the calendar below for the actions nearest you. 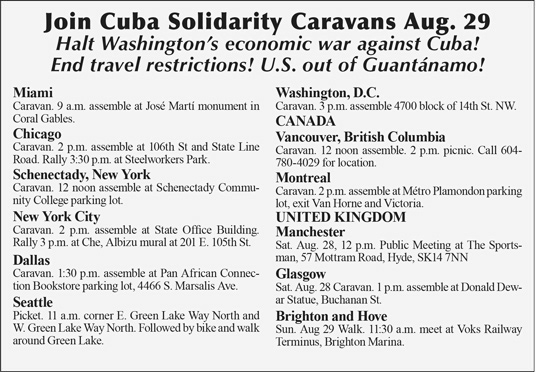 Imperialist scorn, Cuban solidarity on display after earthquake in Haiti

With more than 2,100 dead, over 12,000 injured and an estimated 136,000 families left homeless after an Aug. 14 earthquake that ravaged southwest Haiti, the trickle of international aid is nowhere near what is needed. Just like in previous disasters…