Groups organized and financed by the U.S. government have announced plans for public actions in several provinces in Cuba Nov. 15, pushing the slander that Cuba is a brutal “dictatorship.” Government officials denied the request for march permits, pointing out the provocations are part of Washington’s decadeslong campaign for “regime change” against Cuba’s socialist revolution seeking to “fracture and divide” the Cuban people.

The marches are called for Nov. 15, the day the Cuban government will reopen the island to tourism, based on its outstanding success in combating the COVID-19 pandemic. The intent of the “protests” is to sabotage Cuba’s efforts to confront the economic difficulties that were exacerbated by the stepped-up attacks by Washington and by the pandemic.

Despite the tightening of the U.S. economic embargo over the last few years, Cuba created its own COVID vaccines and will have 90% of the medically eligible population fully vaccinated by Nov. 15, an accomplishment that strengthens the revolution and has boosted the morale of working people.

In the United States and the rest of the capitalist world, doctors’ offices closed as the virus spread and working people were left on their own, often told to stay at home with no medical care. It’s the opposite in revolutionary Cuba, where medical care is universal and free of charge. The government poured scarce resources into vaccine development and, along with Cuba’s mass organizations, organized doctors, nurses, medical students and other volunteers to go door to door — literally to millions of households a day — to make sure anyone with symptoms received medical treatment.

At the same time, Cuba maintained its internationalist solidarity, responding to requests by governments from Haiti to Italy by sending hundreds of doctors around the world to help fight coronavirus.

“We are getting back on our feet through our own efforts, thanks to the indomitable spirit, dignity and resilience of our people; with the serene and firm steering by the country’s leadership; with the spirit of victory and creativity that has been forged after many years of harsh battles,” said an Oct. 13 editorial in Granma, the daily newspaper of the Communist Party of Cuba.

Impact of US embargo, pandemic

In an interview with the Militant at the end of September, Carlos Fernández de Cossío, head of the Cuban foreign ministry’s department of U.S. affairs, described some of the challenges the Cuban people are striving to meet, faced with the combined effect of the U.S. embargo, the pandemic and the worldwide capitalist economic crisis.

“Every week our government has to review its list of pressing needs and — based on the limited income from foreign tourism and exports — make decisions on what we can allocate funds for and what we have to postpone,” he said. This is one of the reasons reopening the country to international tourism Nov. 15 is important.

The acute economic pressures, including U.S. attempts to block oil shipments to the island, combined with Washington’s political offensive, “came together and were the context” for protests that took place in Cuba on July 11, Fernández de Cossío noted.

The majority of people who took part in those protests “were people genuinely frustrated by the blackouts, the food shortages, the problems with public transit,” he said. But the actions were not spontaneous. The initiators and organizers of the actions were opponents of Cuba’s revolution financed by the U.S. government.

In fact the so-called opposition has little serious support among working people. Much larger actions in support of the revolution rapidly took place across the island in response the same day, but these were barely reported by the capitalist media.

Cuban President Miguel Díaz-Canel and other government officials have been visiting neighborhoods where the effect of the economic crisis are the greatest, meeting with working people there and prioritizing programs to repair roads, build offices for neighborhood doctors, and construct housing and recreation centers.

Mass organizations like the neighborhood-based Committees for the Defense of the Revolution have also been working to “revitalize” their work, prioritizing the least-developed areas. “We have concrete examples of people who looked at us with skepticism the first time we went to the barrios,” Gerardo Hernández told Venceremos. “When they realize that things are actually concretized they gain confidence and everything changes.” But the U.S. economic war makes it difficult to do everything that is needed, he said.

In fact, the example of the Cuban people and their government are an example for workers around the world.

One of the main public spokespeople for the counterrevolutionary Nov. 15 actions is Yunior García Aguilera, an actor and playwright. In a Dec. 14, 2020, letter to the International Society for the Performing Arts, he claimed that “creative freedoms” and “our right to free expression” are threatened in Cuba. But then he admits that his work has “not been censored.”

That’s still the case and interviews with García in years past, before he began speaking on behalf of U.S. imperialism, are still available on official Cuban media websites.

None of this, of course, stops the U.S. government from claiming that the Cuban government is denying “fundamental” freedoms. In blatant interference in the sovereign affairs of Cuba, the White House threatens to respond with increased pressure if Cuban forces arrest anyone for violating the Nov. 15 ban.

While Washington continues its attacks on Cuba, the White House dispatched Secretary of State Antony Blinken on a three-day tour to “highlight democracy” in Colombia and Ecuador. His visit with former banker Ecuadorian President Guillermo Lasso Oct. 19 took place a day after the government there imposed a 60-day state of emergency, curtailing freedom of movement, restricting gatherings and deploying military troops and cops for 24-hour daily patrols on the street, supposedly to fight crime.

The next day Blinken went to Colombia to meet with President Iván Duque, one of U.S. imperialism’s closest allies in Latin America. Earlier this year at least 29 people were killed by cops for participating in widespread protests against the Duque government and the economic crisis facing working people there. 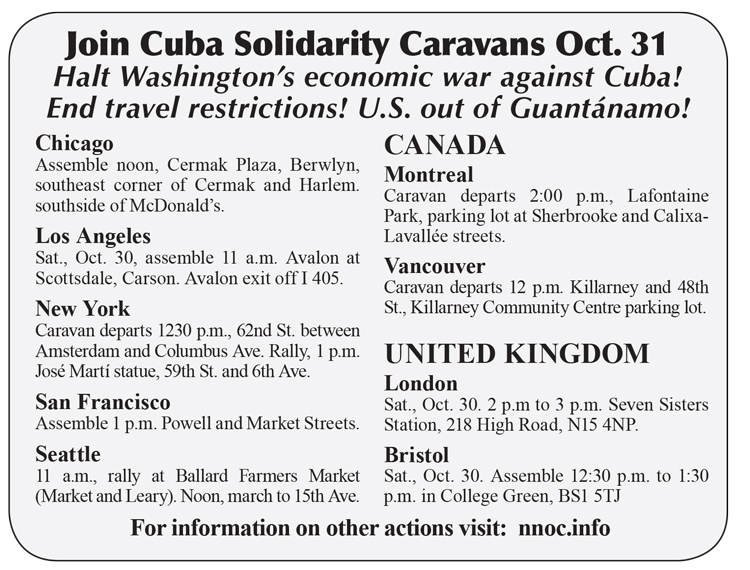