“I need this paper,” school teacher Juawana Kinnard told Socialist Workers Party member Anthony Dutrow as they sat on her porch in Cincinnati and she signed up to renew her Militant  subscription July 8.

“All the other news I see tells me that we are the ones responsible for the crisis we and our families face,” she said, “and that all we can do about it is elect Democrats or Republicans who promise to solve everything for us. Well, we’ve done that for years and here we are!”

Dutrow said working people need to organize independently of the bosses’ twin parties and build our own party, a labor party. Kinnard purchased three books to learn more about the SWP’s program, including Labor, Nature, and the Evolution of Humanity: The Long View of History. “I think we have to understand our history in order to be able to change our future,” she said.

As part of taking the SWP’s fighting program broadly among working people, party members are involved in a five-week international effort to win 300 of those who subscribed to the Militant  this spring to becoming long-term readers of the paper. The June 25-Aug. 2 drive includes selling 300 books by SWP leaders and other revolutionary fighters to subscribers.

Big strides have also been taken in efforts by party members and supporters to win ballot status for Chris Hoeppner, SWP candidate for U.S. Congress in Pennsylvania’s 3rd District, as party members discuss the roots of the crisis working people face and what we can do to end it. Campaigners had gathered 2,107 signatures by July 20, more than twice the number required. In addition, 51 Militant  subscriptions have been sold, and 40 books. They plan to get a couple hundred more signatures and then turn them in with a press conference in Harrisburg, the state capital, next week.

“As a Black man, I can’t help but see white racism as the problem every place I turn, from jobs to housing,” Theodore Ramsen told Hoeppner at a farmers market in West Philadelphia July 16. “Is there systematic racism in the U.S.?”

“Yes, there is,” Hoeppner replied. “But capitalism is the system. Capitalism can’t exist without pitting us workers against each other. The source isn’t white people.

“The only way to eliminate racism, like the oppression of women and imperialist wars, is for working people in all our colors, religions and nationalities to take power out of the hands of the capitalists and reorganize society on the basis of solidarity. This is what the SWP is aiming to do,” he said.

Sedia Ali, whose family is from Afghanistan, joined the conversation. “Things are worse there since the U.S. went in,” she said, referring to the bombardment, invasion and 20-year U.S. occupation of the country.

“I can’t think of anything more valuable than having this discussion about the source of our problems,” Ramsen added.

Both signed the SWP petition and got Militant  subscriptions. Ali also bought Labor, Nature, and the Evolution of Humanity and Black Music, White Business by Frank Kofsky, a book about the exploitation of and racist contempt for African American jazz musicians.

Rachele Fruit, the party’s candidate for governor of Florida, and campaign supporter Kay O’Neill discussed the SWP statement, “Defend the working class, our families, women’s rights,” with participants at a Ft. Lauderdale demonstration against the U.S. Supreme Court’s overturn of Roe v. Wade. The July 13 action was sponsored by Women’s March and Planned Parenthood. Issued by Alyson Kennedy, the party’s candidate for Texas governor, the statement explains why the only way to fight for women’s rights, including legal and safe abortion, is as part of a broader working-class perspective to win jobs, health care, child care, family planning and the other things workers need.

“I love the flyer,” Christine Rotondo told Fruit after reading the party statement. Rotondo was attending the demonstration with her daughter, Grace. “We’re huge supporters of this issue even though my husband doesn’t agree.”

“This is a working-class issue,” Fruit said. “If you need to have an abortion because you can’t afford to raise another child, that’s not a choice. Workers on strike today are using their unions to demand better living and working conditions. This is key to advancing the fight for women’s emancipation.”

O’Neill discussed the importance of fighting for affordable child care with Stephanie Ordonez, a Cuban American and new mother.

“I used to work at the University of Miami Veterinarian Division,” Ordonez said. “They only had two weeks paid maternity leave. Then you have to pay for short-term disability, but you can only get six weeks. Child care is hard to find. Women want to work. I’m proud to be working. And it’s really important for single dads too.”

“It’s becoming harder financially to support a family,” Prosser told participants Paige Hawkins and Serina Pikop. “We need to build a society in which women who want to raise children can do so. We should reclaim the slogan ‘pro-life,’” from opponents of women’s rights.” Four Militant  subscriptions and nine books by SWP leaders and other revolutionaries were sold at the action.

At Atlanta’s Norfolk Southern Inman rail yard July 15, Lisa Potash, SWP candidate for U.S. Senate from Georgia, and SWP member Janice Lynn discussed working conditions with workers there and introduced the Militant. The paper reports on actions by rail workers to defend themselves from employer assaults on wages, conditions and safety.

“Management cuts corners and gets lax with the rules when in a rush. It’s not safe,” engineer Kareem Chivers, 47, with 18 years experience on the railroad, told the SWP campaigners. A member of the Brotherhood of Locomotive Engineers and Trainmen, he added that the bosses push to run trains with just one engineer was another safety issue. “You need a conductor to check what is happening at the back of the train,” he said.

These conditions are a result of “employers looking to increase their profits,” Potash said. “It’s important to extend solidarity wherever workers are standing up and fighting.” She pointed to the fight of rail workers in the U.K. and coal miners at Warrior Met in Alabama.

“The companies are cutting back to save on costs, all in the name of greed, when actually they’re understaffed, cutting into safety,” Kyle Holiday, a  member of both the Transportation Communications Union and SMART-TD unions, told Potash. “They really need to hire.”

Of the half-dozen rail workers who stopped their cars to talk, five bought copies of the Militant.

SWP candidates are receiving press coverage. The July 15 Spokesman-Review ran an article about candidates running for U.S. Senate in Washington state. “Henry Clay Dennison, a rail worker, is running as the Socialist Workers Party candidate,” the paper said. The party “focuses on giving working people a chance to organize, defend themselves and ‘make gains amid deepening world capitalist crises,’ Dennison wrote in his voters guide statement.”

“‘Only a revolutionary government of workers and farmers can build a society in the interests of the majority,’ Dennison wrote. ‘That’s what the SWP fights for.’”

To join the Militant subscription renewal drive and campaigning for SWP candidates, contact the nearest SWP branch listed in the directory.

Jacquie Henderson contributed to this article. 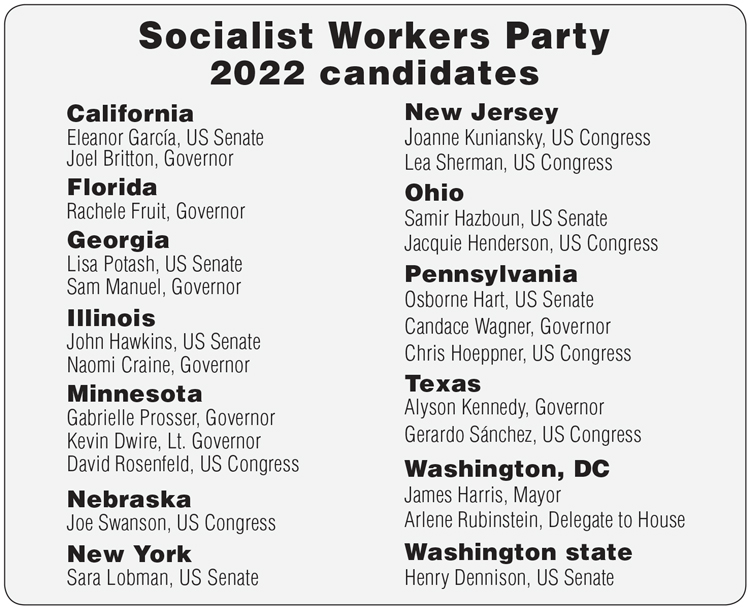