On July 9 Secretary of State Antony Blinken announced another round of visa restrictions, barring 28 Cuban officials, including high-ranking members of the Cuban Communist Party, from being able to travel to the U.S. to participate in trade and political meetings. The measure comes on top of three other rounds of visa restrictions imposed by the Joseph Biden administration since November 2021, as well as four rounds of financial sanctions over the last year.

The restrictions are a piece of the U.S. government’s bipartisan 63-year war against Cuba’s socialist revolution. The U.S. rulers — under Democratic and Republican administrations alike — have imposed thousands of economic and financial restrictions on Cuba, including 243 measures tightening the embargo added by former President Donald Trump and extended by the Biden White House.

The embargo blocks the import of medical supplies, fuel and other vitally needed parts and products; sharply curtails Cuba’s access to the international banking system; and targets companies carrying out trade with Cuba.

Washington imposed the new restrictions under a Reagan-era policy that suspended nonimmigrant entry to the U.S. by members of the Cuban government and the Cuban Communist Party. Cuban Foreign Minister Bruno Rodríguez condemned the move as a violation of international law.

While the capitalist press gave some coverage to a May announcement by the Biden administration easing some restrictions on travel by and remittances to Cuban families, both of which will be welcome in Cuba, the new sanctions show the aim of the capitalist rulers remains the same — to crush the Cuban Revolution, overturn their government and restore capitalist rule.

The U.S. rulers have sharply stepped up their slanders of Cuba, including in the liberal press, claiming that public actions on July 11, 2021, were massive popular protests brutally put down by a repressive government. The Biden administration says the 28 now denied visas, who haven’t been named, include officials who were involved in the supposed repression.

Those one-day actions that took place in 11 cities, the Cuban government explained, were promoted by U.S.-backed provocateurs. But they drew people genuinely frustrated by the blackouts, food shortages, problems with public transit and many other difficulties rooted in the U.S. embargo and today’s crisis of capitalist production and trade, exacerbated by the COVID-19 pandemic. 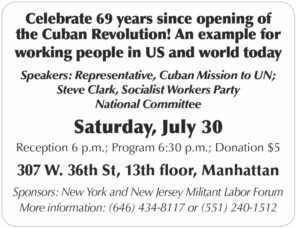 The Cuban government’s response to the demonstrations was to reach out to residents, organizing with them to collectively work to improve conditions, repair streets and homes, and involve youth who weren’t working into productive activity.

Efforts by Washington to organize a repeat of the demonstrations in November fell flat.

The U.S. rulers underestimated — as they always do — the capacity of Cuban working people and their government to defend the revolution. This was reflected when hundreds of thousands turned out in Havana and across the country for massive May Day demonstrations.

In an interview with the Militant last September, Carlos Fernández de Cossío, head of the Cuban Foreign Ministry’s department for U.S. affairs, explained that the imperialists bet — wrongly — that the revolution wouldn’t survive after Fidel Castro died, and did so again after Raúl Castro stepped down as president.

“Today this government is led by new generations. Cuba is not capitalist, it doesn’t accept capitalism,” he said. “That represents an obstacle for imperialism in this hemisphere.”