MONTREAL — The Communist League candidates in the Oct. 3 Quebec provincial elections — Katy LeRougetel and Félix Vincent Ardea — are winning a hearing from working people who are looking for a road forward in the face of today’s deepening capitalist crisis.

LeRougetel, a bakery worker and member of the Bakery, Confectionery, Tobacco Workers and Grain Millers International Union, is running in the riding of Anjou-Louis Riel for the Quebec National Assembly. Vincent Ardea, a train conductor at Canadian National Railway and a Teamsters union member, is running in Marquette. Supporters of the Communist League campaign are organizing to turn in well over the 100 signatures needed in each riding by Sept. 1 to be on the ballot.

Gabrielle Prosser, Socialist Workers Party candidate for governor of Minnesota, and Sara Lobman, SWP candidate for US. Senate from New York, joined in campaigning here over the Aug. 13-14 weekend. By Aug. 28, campaigners had already collected 92 signatures for LeRougetel and 104 for Vincent Ardea.

The CL candidates are using the campaign to promote solidarity with workers on strike around the country, including some 530 Rolls-Royce workers here who have been locked out for five months fighting for a decent pension for all the workers in the plant. They are also championing the strike of maritime workers in Sorel, Quebec. They explain that out of struggles like these, workers will see the need and gain the confidence to form our own party, a labor party based on the unions, and point the way to bringing to power a workers and farmers government in Canada.

“I was expecting lots more negative comments, but people could see the common sense of what we’re saying,” CN train conductor Alexandre Jacob told the Militant after his first experience campaigning door to door with LeRougetel in Anjou Aug. 26. In a little under an hour, six people signed to put LeRougetel on the ballot, one bought a copy of the Militant, and they got almost $10 in donations for the campaign.

The next day, LeRougetel met Merite Lubeya, a worker for a cleaning company who is also going to school. LeRougetel described the League’s working-class program, including the importance of building solidarity with workers in struggle like those at Rolls Royce. Lubeya said she had worked at the Rolls-Royce plant cleaning the building before the strike. “For real, I support that strike,” Lubeya said.

LeRougetel proposed they go to the picket line together. “Sure, I could go but I’m nobody,” Lubeya said.

“That’s the most powerful weapon the bosses use against us, to convince us we aren’t worth anything and that we can’t change anything,” LeRougetel said. The two are organizing to visit the Rolls-Royce picket line together Sept. 2. Lubeya signed to put LeRougetel on the ballot and got a copy of the Militant.

When CL campaigner Philippe Tessier met Ben Ahmed, a meatpacker in Drummondville, originally from Tunisia, on his doorstep and handed him the League’s campaign leaflet, Ahmed read it and said he didn’t agree with the plank that called for solidarity with the Ukrainian peoples fight to defend their independence against Moscow’s invasion of their country. “I don’t want any of this, I’m for Russia in the war,” he said. “Why should I pay high gas prices for the sanctions that Canada, the U.S. and others are putting on Russia?”

“The U.S. and Canada are ruled by the capitalists, who are looking out for their own pocket. But who is Putin ruling for? The same class of people,” Tessier said. “Workers need our own independent working-class foreign policy.”

“At the same time our campaign is completely with you on the sanctions. They hurt workers and farmers harder than anyone else, making it more difficult to win Russian soldiers and workers to join with Ukrainian toilers to fight to stop Putin’s war.”

“Whose side are you on? The president of Ukraine who is banning opposition parties?” asked Ahmed.

“We are on the sides of workers and farmers in Ukraine fighting for their independence. We are also on the side of those in Russia fighting against the war. They are the ones used as cannon fodder. A new revolutionary leadership will be born out of those fighters,” Tessier said.

Ahmed noticed the campaign flyer promotes solidarity with the Rolls-Royce strikers. He told Tessier that he supports them and honks every time he passes their picket line. By the end of the discussion he took the CL campaign leaflet, the Socialist Workers Party statement backing the fight to defend Ukraine’s independence and bought a copy of the Militant. He also bought a copy in Arabic of Capitalism’s Long Hot Winter Has Begun by Socialist Workers Party National Secretary Jack Barnes. 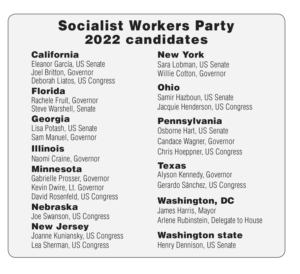 Join fall drive to get out the ‘Militant’

In two weeks members of the Socialist Workers Party and the Communist Leagues in Australia, Canada and the U.K. will launch an ambitious drive to further expand the reach of the Militant. Coupled with the bold use of SWP election…