Socialist Workers Party candidates and members have been building and participating in demonstrations across the U.S. in solidarity with working people and youth protesting in Iran over the death of Mahsa Amini after she was detained for allegedly violating the country’s anti-women dress codes.

Lisa Potash, Socialist Workers Party candidate for U.S. Senate in Georgia, spoke at a “Women, life, freedom” rally of 500 in Atlanta Oct. 8. She pointed to the widespread support given to the protests by working people across Iran, including from the Organizing Council of Oil Contract Workers. “Workers and farmers in Iran bear the brunt of the worldwide capitalist economic crisis, compounded by U.S.-led sanctions,” Potash said. “Sanctions fall hardest on working people,” who are standing up to the reactionary bourgeois clerical regime there.

In Los Angeles, party members and Militant supporters joined an Oct. 9 action of 1,000 protesters outraged over the death of Amini.

After subscribing to the Militant at an earlier demonstration, one man sought out the SWP’s table. He bought the Farsi-language edition of 50 Years of Covert Operations in the US by Larry Seigle and Steve Clark. The book tells the story of the party’s fight to push back the U.S. government’s use of its secret political police, the FBI, against unionists, Black rights fighters and Socialist Workers Party members from the 1930s until today. 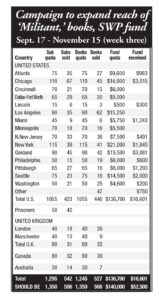 With the FBI spearheading the White House’s current assault on constitutional freedoms, party members are finding growing interest in the title. Twelve other books in Farsi were bought at the Los Angeles demonstration, along with two subscriptions to the Militant.

At similar demonstrations and union strike picket lines, labor movement events and on workers’ doorsteps, members of the party and the Communist Leagues in Australia, Canada and the United Kingdom are bringing support and introducing the Militant and books by SWP leaders and other revolutionaries as part of an eight-week campaign to sell 1,350 Militant subscriptions and the same number of books.

In the U.S. $140,000 is being raised for the SWP Party-Building Fund. Many workers understand why the party accepts no funding from big business. It relies instead on the support of working people who contribute whatever they can to help finance its work.

The Militant spreads the word about union struggles and is a tool for building solidarity. Along with the books, the paper explains the truth about the exploitation, oppression and wars that are part and parcel of capitalist rule, and offers a road forward to replace it with workers’ power.

In Cincinnati the party’s candidate for U.S. Congress, Jacquie Henderson, and SWP member Betsy Farley knocked on the door of retired retail worker Mary Goodwin Oct. 9. “President Biden’s government has used its weight against rail workers fighting against conditions that increase injuries and deaths,” Farley said. “It has used the National Labor Relations Board against striking coal miners in Alabama.”

Henderson showed Goodwin Malcolm X, Black Liberation, and the Road to Workers Power by SWP National Secretary Jack Barnes, pointing out how constitutional freedoms were defended and extended in the course of revolutionary battles and other working-class struggles. Goodwin got the book and a subscription to the Militant. She bought a second subscription for a friend in California. “I think she will be interested in this too,” she said.

Join in getting out the word about today’s working-class strikes and struggles and building solidarity, using the Militant to get out the truth. Contact the SWP or Communist League branch nearest you. 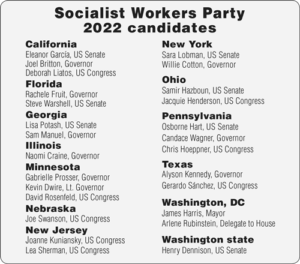