Florida prison officials have been stepping up their censorship of the Militant. Most recently, they impounded the Sept. 17 issue and the newspaper is fighting to overturn the decision. At least 18 issues of the Militant have been impounded there over the last two years. All but five of those bans were overturned by the prison system’s Literature Review Committee.

In impounding the Sept. 17 issue, prison authorities cited two articles — one on a rally against solitary confinement in California and one on a hunger strike of Ukraine film director Oleg Sentsov, imprisoned by the Russian government of Vladimir Putin, demanding freedom for all Ukrainian political prisoners there, even though previous issues with articles on the same topics weren’t censored.

Authorities in Florida clearly hope that the time and money required to fight each impoundment — based on utterly false accusations that the Militant encourages violence or is “dangerously inflammatory” — will wear down the Militant and give prison bosses free rein over what prisoners can read.

“We will continue to fight and to win against the censorship, and to press authorities there to follow their own rules,” Militant editor John Studer said Oct. 9. “The fact that the Review Committee overturns the vast majority of the impoundments means they should tell prison wardens to stop the impoundments in the first place.

“We are fighting for the constitutional right of prisoners to read material of their choosing, not just those that prison and government officials prefer,” he said. “They have a right to form their own opinions, to know what is going on in the world.”

“We are asking supporters of democratic and political rights, unions, church groups as well as civil liberties organizations to send letters calling on the Literature Review Committee to overturn the latest impoundment,” Studer said.

As a result of previous fights by the Militant and by inmates there and other supporters of prisoners’ rights, the New York State Department of Corrections explicitly states in their guidelines that the Militant is one of the publications that “shall generally be approved,” Studer noted. “The Florida Literature Review Committee can instruct wardens to stop singling out the Militant for censorship.”

This fight for freedom of speech and freedom of the press in Florida prisons takes on added importance because of attacks by prison officials in other parts of the country.

Democratic Party governor of Pennsylvania Tom Wolfe and prison officials there announced severe restrictions on books, periodicals and letters last month. The nearly 47,000 prisoners in the state are no longer allowed to receive any letters, cards or photos directly from friends and relatives. State officials claimed that literature and mail was coming in bathed in drugs, and guards got sick when they touched them.

Mail to workers behind bars now has to be sent to Smart Communications in St. Petersburg, Florida. Smart will scan the mail, and any photos and clippings, and send digital files back to Pennsylvania officials, who are supposed to print them out and give them to inmates.

Mail from lawyers is to be opened and photocopied by guards in front of the prisoners. In a gross violation of attorney-client privilege, prison officials will keep the originals.

Pennsylvania prisoners can no longer order books and periodicals directly from book and newspaper publishers like the Militant, nor can they receive donated books from Pennsylvania volunteer programs like Books Through Bars, and Book ‘Em. Instead, they have to ask prison authorities to order publications. If approved, prisoners have two days to pay in full.

New York state and Maryland officials also tried earlier this year to require prisoners to buy books only from a handful of approved vendors, who had an extremely limited selection, mostly self-help, comic books, and religious texts. The programs were rescinded after civil liberties and prisoner rights groups protested. 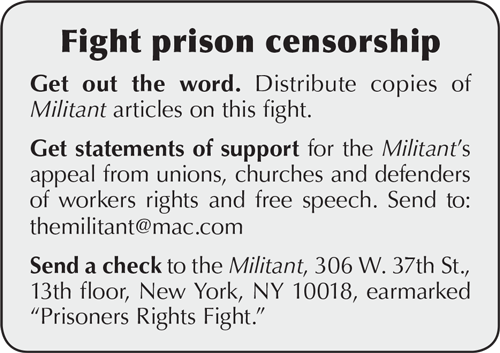 Supporters of the rights of workers behind bars can organize similar programs in their areas and look to involve labor activists, union officials, church groups and other. This can help get out the word and more letters of support.

Send letters to Dean Peterson, Library Services Administrator, Florida Department of Corrections, Attn: Literature Review Committee, 501 South Calhoun Street, Tallahassee, FL 32399-2500, via email to Allen.Peterson@fdc.myflorida.com, or via fax at (850) 922-2121. Please send a copy and a contribution to continue this battle to the Militant.