“This disaster was caused by the negligence of Atmos Energy,” Juanita Jimenez, a house cleaner, who has lived for 25 years across the street from the Rogers’ house, told Kennedy. “When the house exploded people were screaming and I ran outside. The day before two nearby houses were destroyed by fires from leaking lines. People reported smelling gas, but Atmos didn’t shut down anything. They knew this could happen.”

“This capitalist contempt for life and limb of workers is criminal,” Kennedy responded. “It’s an example of why working people need to break with the Democrats and Republicans and build their own labor party to unite workers and represent our class interests.”

Jimenez got a copy of Are They Rich Because They’re Smart? — a book by Socialist Workers Party National Secretary Jack Barnes.

The SWP campaigners also met Dennis Baker, a retired locksmith, who has lived in that neighborhood for 20 years. “Yeah, Atmos replaced the lines, but it took the death of a 12-year-old to make them do what they were ordered to do years ago,” he said.

Baker was interested in the article in the Oct. 15 Militant entitled “Presumption of Innocence Is a Crucial Right for Working Class,” on the stakes for working people posed by the debate among the rulers on the Supreme Court nomination of Brett Kavanaugh. Baker said he was concerned about the erosion of political rights facing working people and bought a copy of the paper. 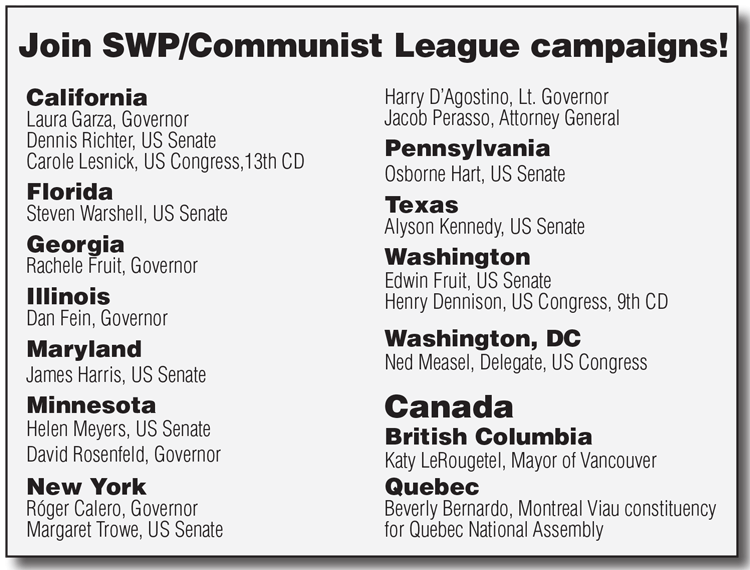 The pressure of the gas the non-union Columbia Gas Company was pumping into the area that day was 12 times higher than normal, the Boston Globe reported.

“My son and I were told to evacuate, but we had nowhere to go, so we slept in the car,” meatpacker Cynthia Gonzalez, 44, told Huinil when we knocked on her door. “The company and the government don’t care about us.”

“This wasn’t an accident, it was a social disaster caused by the bosses’ contempt for the safety of working people,” Huinil said. “In Cuba, where workers and farmers made a revolution, there are hurricanes, but the government and the entire people are prepared, and thousands mobilize to carry out orderly evacuations that treat working people with dignity. They provide housing for the displaced, and begin repairing damage immediately after the storm subsides.”

The central political activity of the SWP, and for members of the Communist Leagues in Australia, Canada, New Zealand and the U.K., is visiting with workers on their doorsteps and living rooms in cities, towns and rural areas to discuss a road forward for the working class.

The SWP has launched an eight-week drive to sell 1,500 subscriptions to the Militant and 1,500 copies of five specially priced books, including Are They Rich Because They’re Smart?  And to raise $100,000 for the Socialist Workers Party-Building Fund from Oct. 6 through Dec. 4.

The drive is aimed at reinforcing the party’s door-to-door campaigning and to increase the reach of the Militant and the party. Party members talk about what working people face today, the need to build solidarity with working-class struggles, and point to the road toward independent working-class political action.

“Working people in Puerto Rico and the Carolinas are finding ways to work together to deal with the consequences of the hurricanes that hit them, which are a social crisis caused by the capitalist system,” Róger Calero, Socialist Workers Party candidate for governor of New York, told Matthew Wright, a graphic artist, at his door in a New York City housing complex Oct. 2. “We are seeing embryonic examples that show workers’ capacity to organize themselves and others.”

Wright said he follows and defends the revolution made by the Cuban workers and farmers, who prepare and react to hurricanes in a totally different way. “The press here hides how people in Cuba work together during hurricanes to minimize loss of life,” he said, and extend help internationally.

“When Cubans went to Angola,” Wright said, referring to the 425,000 Cubans who volunteered between 1975 and 1991 to help defend newly independent Angola against multiple invasions by South Africa’s racist apartheid regime, “the U.S. government was surprised. They said, ‘Who do these colonial people think they are, showing up in Africa?’ But no, they go around the world and help other people too!”

Wright subscribed to the Militant and said he looks forward to talking again and looking at the books Socialist Workers Party members are promoting.

Norton Sandler and Fredy Huinil had a discussion with Dora Correa in the Boyle Heights district of Los Angeles Oct. 6. Correa is a part-time house cleaner whose husband, a butcher in a nonunion market, “gets bad pay and no benefits,” she said.

The socialists showed Correa a recent Militant article, “‘Anti—Gentrification Fight’ Is Pretext for Attack on Art, Culture that Workers Need,” which addressed a debate going on in Boyle Heights. Claiming to be fighting against “gentrification” in the predominantly Latino neighborhood, small groups of middle-class leftists and anarchists have gone on a campaign to physically attack art galleries, as well as threaten and race-bait artists, gallery owners and others.

“But there are big changes in the neighborhood,” Correa responded, “with rents going up, something has to be done!”

“Rent exploitation is part of capitalism,” Huinil said. “Working people need to act independently of the capitalists and the parties that protect their interests. We need a labor party that fights for working people.”

“That’s a new idea,” Correa said. “We need something. The rich have no idea how we live. Some weeks we live on rice and beans.” At the conclusion of the discussion, she purchased an introductory subscription to the Militant and two books by SWP National Secretary Barnes — Are They Rich Because They’re Smart? and The Clintons’ Anti-Working-Class Record; and Is Socialist Revolution in the US Possible? by SWP leader Mary-Alice Waters.

To join Socialist Workers Party and Communist League members in this effort, or to make a contribution to the Party-Building Fund, contact the party branch nearest to you. (See directory.)