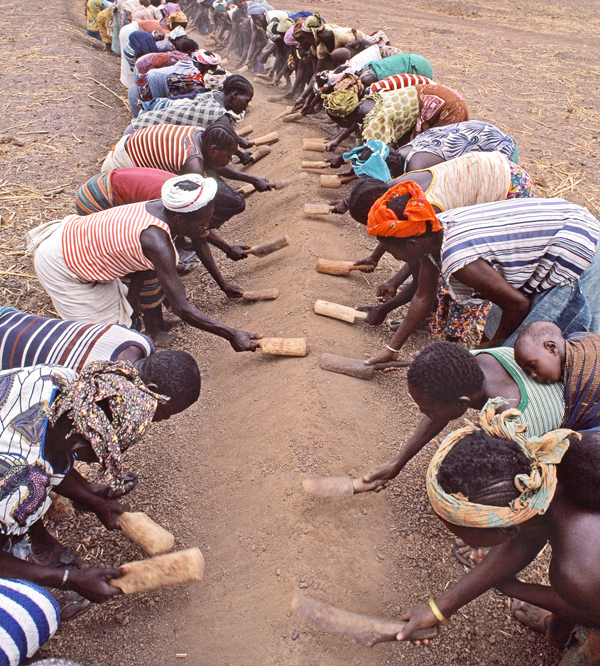 The French-language edition of  We Are Heirs of the World’s Revolutions by Thomas Sankara is one of Pathfinder’s Books of the Month for October. Sankara was the central leader of the 1983-87 popular democratic revolution in the West African country of Burkina Faso, called Upper Volta under French colonial rule. He was assassinated in a coup on Oct. 15, 1987, but his example and revolutionary course live on. The excerpts below are from his Oct. 2, 1983, “Political Orientation Speech,” which was broadcast nationwide. It became the revolution’s main programmatic document. Copyright © 2002 by Pathfinder Press. Reprinted by permission.

BY THOMAS SANKARA
Our revolution is a revolution that is unfolding in a backward, agricultural country, where the weight of tradition and ideology emanating from a feudal-type social organization weighs very heavily on the popular masses. It is a revolution in a country that, because of imperialism’s domination and exploitation of our people, has evolved from a colony into a neocolony.

It is a revolution occurring in a country still characterized by the lack of an organized working class conscious of its historic mission, and which therefore possesses no tradition of revolutionary struggle. …

Its primary tasks are to eliminate imperialist domination and exploitation; and to purge the countryside of all the social, economic, and cultural obstacles that keep it in a backward state. Its democratic character flows from this.

It draws its popular character from the full participation of the Voltaic masses in the revolution, and their consistent mobilization around democratic and revolutionary slogans that concretely express their own interests in opposition to those of the reactionary classes allied with imperialism. The popular character of the August [1983] revolution also lies in the fact that, in place of the old state machinery, new machinery is being built, capable of guaranteeing the democratic exercise of power by the people and for the people. …

All the previous political regimes, one after the other, until now have strived to introduce measures to better run neocolonial society. The changes introduced by these regimes amounted to installing new teams within the continuity of neocolonial power. None of these regimes wished nor was able to question the socioeconomic foundations of Voltaic society. That is why they all failed.

The August revolution does not aim to establish one more regime in Upper Volta. It represents a break with all previously known regimes. Its ultimate goal is to build a new Voltaic society, within which the Voltaic citizen, driven by revolutionary consciousness, will be the architect of his own happiness, a happiness equal to the efforts he will have made.

To do this, the revolution—whether the conservative and backward forces like it or not—will be a deep and total upheaval that will spare no domain, no sector of economic, social, and cultural activity. …

The weight of age-old traditions in our society has relegated women to the rank of beasts of burden. Women suffer doubly from all the scourges of neocolonial society. First, they experience the same suffering as men. Second, they are subjected to additional suffering by men.

Our revolution is in the interests of all the oppressed and all those who are exploited in today’s society. It is therefore in the interests of women, since the basis of their domination by men lies in the system through which society’s political and economic life is organized. By changing the social order that oppresses women, the revolution creates the conditions for their genuine emancipation.

The women and men of our society are all victims of imperialist oppression and domination. That is why they wage the same battle. The revolution and women’s liberation go together. We do not talk of women’s emancipation as an act of charity or out of a surge of human compassion. It is a basic necessity for the revolution to triumph. Women hold up the other half of the sky.

Forging a new mentality among Voltaic women that allows them to take responsibility for the country’s destiny alongside men is one of the essential tasks of the revolution. The same is true of the transformation to be made in men’s attitudes toward women.

Until now, women have been excluded from the realm of decision making. The revolution, by entrusting women with responsibilities, is creating the conditions for unleashing women’s fighting initiative. As part of its revolutionary policy, the CNR [National Council of the Revolution] will work to mobilize, organize, and unite all the dynamic forces of the nation, and women will not be left behind. They will be involved in all the battles we will have to wage against the various shackles of neocolonial society in order to build a new society. They will be involved at all levels in conceiving projects, making decisions, and implementing them — in organizing the life of the nation as a whole. The final goal of this great undertaking is to build a free and prosperous society in which women will be equal to men in all spheres.

However, we must have a correct understanding of the question of women’s emancipation. It is not a mechanical equality between men and women, acquiring habits recognized as male — drinking, smoking, and wearing pants. That’s not the emancipation of women. Nor will acquiring diplomas make women equal to men or more emancipated. A diploma is not a free pass to emancipation.

One of the CNR’s essential concerns is to unite the different nationalities that exist in Upper Volta in the common struggle against our revolution’s enemies. There are indeed in our country a multitude of ethnic groups that differ from each other in language and customs. The Voltaic nation consists of the totality of these nationalities. Imperialism, through its policy of divide and rule, strove to exacerbate the contradictions among them, to set one against the other.