After impounding seven issues in one 10-week stretch earlier this year, Florida prison officials have eased off on their censorship against the Militant. This isn’t because of any change in the socialist newsweekly’s political coverage of working-class politics and protests worldwide.

It is because of the impact of public attention and protests by Amnesty International USA, PEN America, the National Coalition Against Censorship, the American Civil Liberties Union of Florida and other groups and individuals. The Sept. 17 issue of the paper was the last one to be impounded. As far as the Militant   is aware, none of the 13 issues since then have been censored.

One prisoner, whose papers had been blocked, informed the Militant  Dec. 3 that authorities have started delivering the paper again, although some issues that weren’t banned still have not been turned over to him.

“Thanks for your support and magnificent work in bringing news to those who’ve had their freedom taken away from them,” he wrote. “I wish you a successful new year, beginning with continuing the fight against the censoring of our newspaper.”

The fight is certainly not over.

Starting in April 2017, and over the next year and a half, Florida prison officials impounded 20 issues of the paper on groundless charges. One ban earlier this year said, “ALL PAGES DISCUSS PROTEST.”

Fifteen of the impoundments were overturned after the Militant  appealed, but five were upheld, with no explanation. “We need to keep up the pressure,” said Militant  editor John Studer. “Prison authorities need to know that violations of the rights of workers behind bars as well as the Militant   will be widely publicized and fought.”

The Florida prison system’s Literature Review Committee initially told the Militant  they had upheld the ban on the Sept. 17 issue. But after it received protest letters, the committee claimed that it had overturned the ban, but forgot to tell the Militant  or the paper’s prison subscribers.

Dean Peterson, head of the review committee, said that when the Militant’ s lawyer had appealed the ban, the committee forgot it had overturned it. They then upheld the ban. When they realized their “mistake,” he said, they decided it wouldn’t be right to “penalize” the Militant  for appealing the overturned ban, so they reversed their decision upholding a ban they had already rescinded.

The Florida Phoenix internet news site reported Dec. 5 on the Militant’ s fight against censorship, quoting from recent letters to the Literature Review Committee from the National Coalition Against Censorship and the Florida ACLU.

The Phoenix reported it had also investigated censorship of books in Florida prisons and “found some startling discrepancies between what the guidelines say and how government censors have ultimately ruled on certain pieces of material.”

Among the banned books are five volumes of Game of Thrones, Innocent Man  by John Grisham, and The Simpson’s Rainy Day Fun Book  by cartoonist Matt Groening. Fifty Shades of Gray  and some issues of Playboy  magazine were allowed. Michelle Alexander’s The New Jim Crow  was taken off Florida’s banned books list only after the ACLU there protested.

The monthly Prison Legal News  is appealing its ban in Florida state prisons to the U.S. Supreme Court.

In September Pennsylvania officials imposed rules limiting prisoners’ access to books, periodicals and letters on the pretext of stopping drug smuggling. Prisoners would no longer be able to order books or periodicals directly from publishers. They would have to apply to prison officials, get their approval and then have 48 hours to pay in full.

All letters — except from their lawyers — are sent to a processing center in Florida. The original is kept on file and a scan of the letter, if approved for delivery, is sent to each prison to be printed out for inmates.

After protests from family members and civil liberties and prisoner rights groups, Pennsylvania officials last month relaxed some of the new rules on publications, but not on letters. Prisoners can order books and magazines, but they must be sent to a central state screening facility before delivery. Newspapers like the Militant  can be sent directly to subscribers.

On Dec. 4, 25 musicians, writers and artists wrote to Pennsylvania Gov. Tom Wolf and called on him to reverse all the restrictions. “Every person has a right to read what they please, and to correspond freely with their loved ones,” they wrote. “The protections in the Bill of Rights don’t end at the jailhouse gate, and unchecked prison censorship and surveillance make all of us less free.” Among the signers were members of the music groups Upstate, Lula Wiles, Felice Brothers, Twisted Pine and Driftwood Soldier. 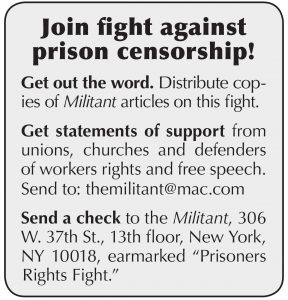 The victories overturning impoundments of the Militant  in Florida and against some of the restrictions in Pennsylvania — along with the overwhelming passage of Florida Constitutional Amendment 4 in restoring voting rights to more than a million ex-prisoners — show that working people oppose violations of our rights no matter what side of the prison walls we’re on.

“Workers behind bars and workers outside of prison have common interests,” Studer said. “We all have the same right to think for ourselves, to discuss and debate issues of importance to the working class, and to speak out in the interests of the exploited and oppressed around the world.”