The chart showing how the party did in the drive is printed below. Overall, SWP branches and Communist League branches in Australia, Canada, New Zealand and the U.K. fell short of selling 1,400 books, which was half of the circulation goal. While a majority of party units made or surpassed their targets for Militant  subscriptions, only six made or went over their book quotas.

The SWP exceeded its fall Party-Building Fund drive quota, raising over $104,000 for the work of the party. Every branch went over 100 percent.

There were five books on special — Are They Rich Because They’re Smart?, The Clintons’ Anti-Working-Class Record, and Malcolm X, Black Liberation, and the Road to Workers Power, all by Socialist Workers Party National Secretary Jack Barnes; Is Socialist Revolution in the US Possible?  by SWP leader Mary-Alice Waters; and “It’s the Poor Who Face the Savagery of the US ‘Justice’ System”: The Cuban Five Talk About Their Lives Within the US Working Class. These books explain the revolutionary working-class perspective working people need today.

They give a broader picture of the crisis wracking the capitalist system, the carnage this is creating for workers and farmers worldwide, and the road forward to build a working-class movement strong and united enough to take political power.

And they show that history teaches it is possible for working people to transform themselves in struggle to become capable not only to take power, but to rule in the interests of the vast majority. That’s why the drive was projected to couple sales of Militant  subscriptions with equal numbers of book sales.

As we begin the 2019 SWP election campaigns that norm will be a key part of running against the bosses’ parties.

The SWP will be launching campaigns for governor in Kentucky, as well as mayor and other municipal offices across the country in 2019. These will be a perfect opportunity for the party to speak as tribunes of the people, backing the struggles of all the oppressed and exploited. To push outwards to reach more and more members of our class and its rural allies, to introduce the party, its books and the Militant.

We want to take to workers in city and countryside the inspiring example of the yellow vest rebellion of the “deplorables” all across provincial France. The Militant  tells how they’ve won concessions, but are protesting for more. Those involved in this new “pitchfork rebellion,” and those in many countries who see their own conditions in this fight, can learn from the great proletarian revolutions in Russia and Cuba. The SWP models itself on the parties that led those revolutions uniting the working class and the rural poor to take political power.

The SWP first turned decisively toward introducing the party to workers on their doorsteps in city and town, as the axis of its work, in Wisconsin in 2011. After taking part in public workers’ protests in Madison, the state capital, where union officials were trying to tie workers’ fate to the Democrats and the rulers’ two-party system, SWP members turned to fanning out across the state.

In this way the party deepened its activity in the working class, engaging workers in an undifferentiated way in discussion on how to meet the attacks we face from the bosses and their government, and to build a working-class movement independent of the capitalists’ parties and their state.

As part of campaigning to get the SWP presidential ticket on the ballot in 2016, SWP supporters in Minnesota campaigned door to door in every corner of the state, in towns, big and small — 48 cities and towns in all.

Campaigning this way, week in and week out, is at the heart of building a proletarian party today.

“There was a lot of interest this fall in the politics presented in the books by party leaders,” Maggie Trowe, the circulation drive’s director, wrote to the Militant  Dec. 11. “These powerful books, coupled with the weekly paper, open the door to follow up with regular discussions and possibilities for common activities with new readers.”

“When we put the 2016 SWP presidential ticket of Alyson Kennedy and Osborne Hart on the ballot in Tennessee, New Jersey, Utah, Minnesota, Vermont, Washington and other states,” Trowe wrote, “we took ambitious goals on book sales side-by-side with goals for Militant  subscriptions. We made the twin goals in every case, helping to politicize the campaign and win partisans to the party.”

It was out of this experience the party decided to combine campaigning with both the books and the paper at the center of our circulation drives.

This weekly column on the exchanges between SWP members and workers we meet campaigning door to door will continue. We welcome reports from readers on how workers describe what they face today as well as discussions that lead to building the working-class movement, increasing solidarity and class-consciousness.

To join in, contact the SWP or Communist League nearest you (see directory).

John Studer is the editor of the  Militant. 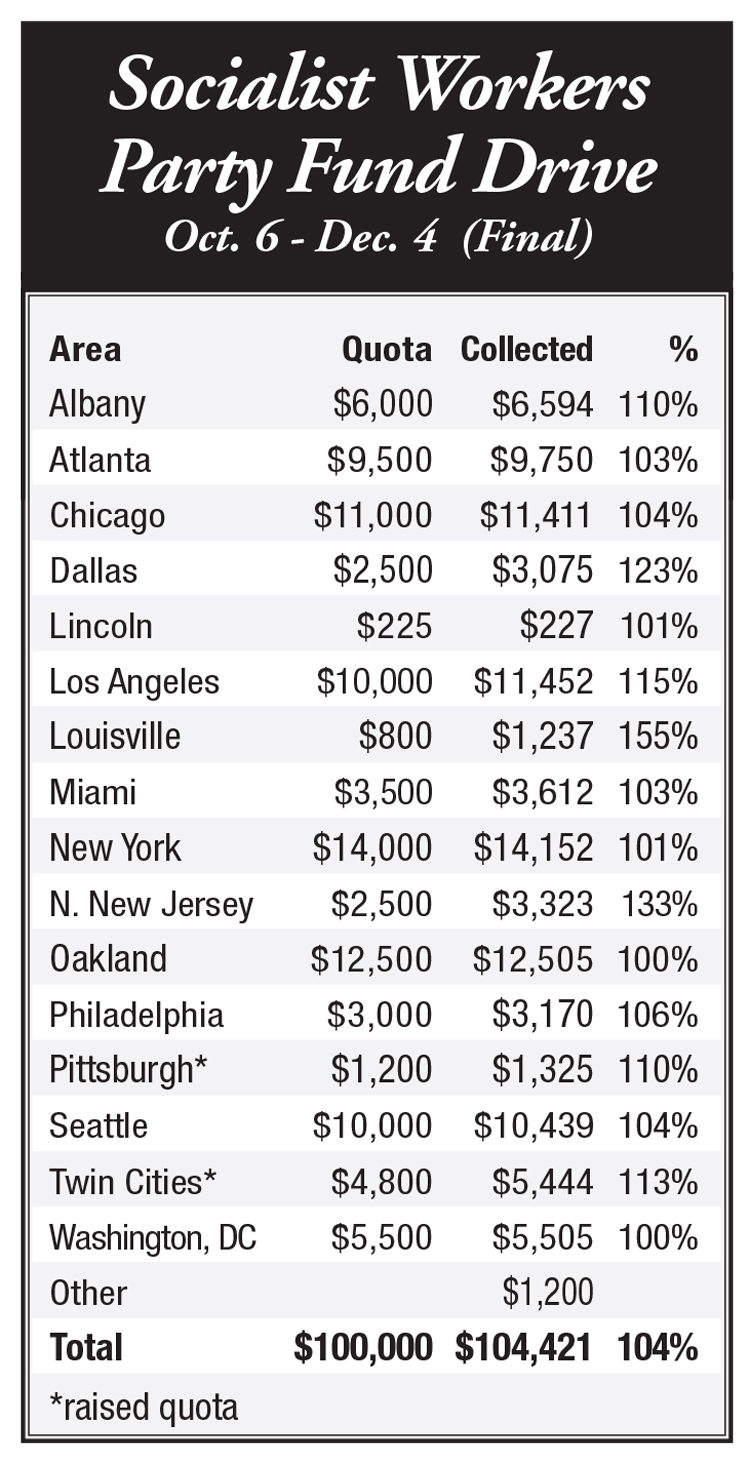