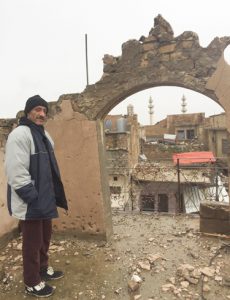 MOSUL, Iraq — Working people here continue to confront the impact of Islamic State’s three-year reign of terror and the destructive nine-month battle of Mosul that drove out the brutal and reactionary sect. Now they face ongoing Iraqi government indifference to their hardships as they try to rebuild their lives. Relief that IS’s despotic rule is over is mixed with despair at the devastation that remains.

“‘Liberation’ was about destruction more than liberation,” Hussein Abbas Ahmed told us outside the home he recently began repairing in the “old city” here on the west bank of the Tigris River. Now a teacher, Ahmed was formerly an imam at a local mosque. “But I stopped that because I refused IS’s instructions to pray for their fighters,” he said.

His house lay near the ruins of the Great al-Nuri Mosque, where IS proclaimed its caliphate after seizing the city in June 2014. When they were defeated “this street had only two IS fighters living on it and they were abandoning the city,” he said. “But the U.S. and Iraqi forces hit it with airstrikes anyway.”

Ahmed had fled with his family across the river, but like many others was forced to return earlier than he intended. He had to throw together a makeshift home amid the rubble as rents skyrocketed in the east.

“Some people say those of us from the western part of Mosul ‘deserve what we get, because we let IS in,’” he said, explaining that the reactionary forces were not in fact welcomed by most residents in western Mosul. Islamic State had gained strength by recruiting a layer of former officers from Saddam Hussein’s army and by playing on the U.S.-installed Iraqi government’s discrimination against Sunni Muslims following Hussein’s overthrow.

“Christians and Muslims have lived here side by side for centuries,” Ahmed, a Sunni Muslim, said. “During every Christian festival we would take sweets to their houses and they would do the same when there were Muslim festivals.”

He showed us around the ruins of the abandoned home of a Christian neighbor who had been renowned in the area for her baking. “Muslims and Christians across the town came to buy her baklava for weddings,” he said. “Everyone in the street wishes she would come back.”

A month after seizing the city, Islamic State ordered all Christians to flee or face execution. We were shown the inside of the ruins of the al-Tahira Church near his home. Like other desecrated churches, it was used by the reactionary sect to carry out executions and to store goods that they decided were forbidden and confiscated. IS had carved out all Christian emblems and inscriptions from the walls of the building.

Since 2003 the country’s Christian population, who lived mainly in northern Iraq, has dropped from 1.2 million to 300,000 today.

Hundreds of thousands still in camps

An estimated 1.8 million people who fled IS as its murderous forces swept across Iraq and the Iraqi army crumbled remain refugees today. Some 500,000 of them are accommodated in camps around the country, many with little prospect of returning to their homes.

The widows and orphans of Islamic State fighters are held in special camps, separated from the rest of the population. Some of these children are looked after at the al-Zahour orphanage in Mosul. The orphanage has faced abuse from people who resent the upkeep provided to the children, considering them undeserving of basic care. But the workers there believe care should be afforded to all.

With 2.5 million inhabitants, Mosul was the largest Iraqi city captured by the terrorist sect. The door-to-door battle to retake it was waged by Iraqi counterterrorism units and Kurdish peshmerga on the ground, reinforced by massive U.S.-led airstrikes.

More than 800,000 people fled the city and 54,000 homes were destroyed. The densely populated old city was subject to fierce fighting as Iraqi government forces retook it block by block. U.S. airstrikes destroyed all five bridges over the river, cutting residents in the western part of the city off from the rest.

Of the estimated 11,000 deaths in the nine-month battle, Associated Press reports that 3,200 were civilians killed by coalition forces. With callous disregard for the lives of Mosul’s toiling population, Washington still doesn’t acknowledge the size of the death toll.

Fight to regain a life … and culture

“Today there is no work apart from casual jobs in cleaning and construction, with no guaranteed hours, making it harder for people to come back,” Ahmed said. “And if you go to eastern Mosul the rents are too high even if you have a job.”

The electricity only went back on in June, “but the government has been cutting the hours it is available,” he said. “Most people living here can’t afford their own generator. But those with private generators can profit by selling electricity to those of us without.” Ahmed was one of the volunteers who rewired the electricity on the street where he lives.

Only a tiny proportion of the government’s supposed $400 million fund for the city’s reconstruction was released in 2017, and none so far this year. Many working people are forced into debt to rebuild their homes. “Where is the mayor?” Ahmed asked. “He has come to west Mosul just once in four years.”

There is a noticeable change in the conditions when you cross the river in the eastern part of the city. Crowds throng around cafes and shops on streets by the University of Mosul. When we stopped at the recently opened Qantara cultural café, well over 100 people were packed into a room taking part in a boisterous poetry reading with an open mic. Cultural activity of this kind was banned and harshly repressed under Islamic State rule. Such events, forbidden by IS, are now beginning to flourish.

MOSUL, Iraq — More than 1,000 people, including hundreds of youth, participated in the second “reading festival” here since the end of the three-year reign of terror by Islamic State. The Nov. 30 event was a celebration of the defeat…

SULAYMANIYAH, Kurdistan — Around 100 women at the University of Sulaymaniyah breached the college’s 5 p.m. curfew for female students Nov. 23, walking out of their dorms at 11 p.m. to protest living conditions there. The protest continued until midnight…