The Socialist Workers Party has announced plans to run candidates for more than a dozen municipal and state offices across the country in 2019, including in Florida, Illinois, Kentucky, Minnesota, New Jersey, New York, Pennsylvania, Texas and Washington. They will be the only working-class voices in the elections and speak out as tribunes of the people.

“My campaign will not just be about workers who live in Dallas but about working people worldwide,” Alyson Kennedy, the SWP candidate for mayor there, said by phone Jan. 1. “Whatever the capitalist rulers do to us here, they do the same thing to working people internationally. That’s why I speak out against U.S. wars abroad from Afghanistan to Syria and Iraq. Bring the troops home now!”

Kennedy, a worker at Walmart, was the party’s presidential candidate in 2016. She was among the first wave of women to become coal miners in the 1970s, strengthening the United Mine Workers union. Most recently she joined protests by striking teachers in Oklahoma last spring.

Supporters of the Socialist Workers Party in Dallas are mapping out a bold plan to kick off campaigning across the state Jan. 12-26, including collecting more than 600 signatures in Dallas to get Kennedy on the ballot.

Tribunes of the people

“We speak in the interests of all those who are exploited, oppressed and discriminated against under capitalism. That’s why we say we are tribunes of the people and it’s why we are going to campaign far and wide in Texas and the region,” Kennedy said. “We want to speak with all working people in towns big and small and farming areas.

“Look at small farmers and ranchers for example. They often end up putting more money into growing crops, raising cattle than they can get back. They go under or are forced to take out high interest loans. They’re debt slaves.”

“We need solidarity,” she said. “We need to fight together or we can never stand up effectively to the capitalist rulers.”

Socialist Workers Party candidates and their supporters across the country will talk to working people on their doorsteps, walk strike picket lines, back drives to organize unions, and join protests against police brutality and other actions against attacks by the bosses and their government.

They will use their campaigns to address the conditions workers and farmers face, such as the lack of affordable, decent housing and health care, the opioid epidemic and falling life expectancy. They will introduce workers, farmers, young people and others to books by SWP leaders and to the Militant, crucial tools for understanding where the crisis of capitalism comes from and what can be done to organize a movement that can take power out of the hands of the capitalist class.

“In Texas, at least 14 hospitals have closed in rural areas since 2010, forcing people to drive hours to see a doctor,” Kennedy said. “And military veterans come back to the U.S. and face scandalous neglect. They can’t get adequate medical care.”

“Amnesty for undocumented immigrants is a big question in Texas and nationally,” she said. “The bosses use workers without papers to try to push down wages. They scapegoat immigrants to try to weaken the fighting capacity of the working class. Fighting for amnesty is key to rebuilding a fighting union movement.”

“Workers behind bars face cruel and unusual punishment,” Kennedy added. “Some Texas prisoners filed a lawsuit against some of these conditions. More than 70 percent have no air conditioning, and temperatures in the summer reach well over 100 degrees.”

“These conditions are the result of the capitalist for-profit system,” Kennedy said. “To see an alterative we will encourage people to join the upcoming International May Day Brigade to Cuba so they can see for themselves how making a revolution changed an entire society.”

The Socialist Workers Party in Louisville is planning to run Amy Husk for governor of Kentucky. Husk, a medical assistant, is a longtime trade unionist.

“For several years opponents of women’s right to choose abortion have been trying to shut down the EMW Women’s Surgical Center here, the last abortion clinic left in the state,” Husk said Jan. 1. Rightists frequently protest outside the clinic and last year pushed a bill through the state legislature that banned a common abortion procedure. That law is on hold as it’s being challenged in court.

“There is a well-organized clinic defense every Saturday morning by women’s rights supporters,” Husk said. “The SWP encourages people to participate and to join protests against the anti-abortion law. To unite the working class, to participate as equals, women have to be able to control our own bodies.”

Henry Clay Dennison will be the SWP candidate for City Council in Seattle. A rail worker and member of the SMART union, Dennison has been active supporting farmworkers in the Skagit Valley who fought and won union recognition and a contract with one of the largest berry growers in the state.

The Socialist Workers Party in New York plans to run Seth Galinsky, a writer for the Militant, for the city’s Public Advocate. The deplorable conditions faced by over 100,000 drivers from app-based companies like Uber and Lyft to traditional yellow cabs, as well as other car services, is a big issue in the city. Eight drivers weighed down by heavy debts have committed suicide in the past year.

“The capitalists who own the cab and app-based operations try to pit workers against each other,” Galinsky said. “The bosses have succeeded in saddling drivers with debts and lengthening the workday of tens of thousands as they try to make ends meet.

“What’s needed is a unionization drive to organize all drivers together to fight for higher wages and better working conditions for all,” he said.

Anthony Dutrow will be the SWP candidate for City Commissioner in Miami. The party campaigned for working people to vote for Amendment 4, which restored voting rights to ex-prisoners. It passed overwhelmingly in November. “That victory is having an impact nationally, including helping spur the recent passage of the federal ‘First Step Act,’” Dutrow said. The law, signed by President Donald Trump, reduces the “three strikes” penalty for drug felonies and retroactively limits the disparity in sentencing between crack and powder cocaine offenses, which can cut the sentences of 2,000 prisoners.

Contact the nearest SWP branch to find out more and to get involved. 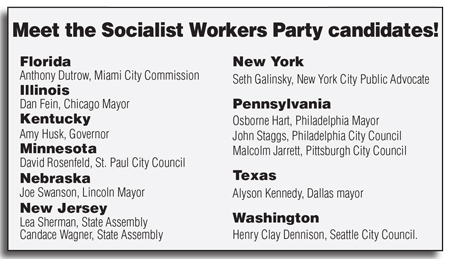 US troops out of Middle East, Afghanistan now!