“While literature lovers across the world say reading expands the mind, for inmates the list of acceptable reading material only expands so far,” reporter Anne Easker writes in a Dec. 24 feature in the daily Charlotte Sun, published in Port Charlotte, Florida, titled “Security or Censorship?” Easker says the state Department of Corrections has upheld the ban on nearly 76 percent of the 9,637 books and periodicals impounded by local prison officials over the last six years.

The impoundments include at least 18 issues of the Militant in the last two years. The paper appealed each one, reaching out for support from civil liberties organizations, church groups, unionists and others. As a result the Militant succeeded in getting the prison system’s Literature Review Committee to overturn all but five of the bans.

“Workers behind bars have a right to read a wide variety of views and literature — including the Militant’s view that working people need to organize to take political power out of the hands of the capitalist class,” Militant editor John Studer said Jan. 1. “We are part of important fights for inmates’ right to get papers, magazines and books of their choosing to be better prepared to join in the working-class movement to change society.”

The American Civil Liberties Union of Florida is one of many organizations that have spoken out against the censorship of books and periodicals, including the Militant.

“To put individuals into this system and then not allow them to read and understand the history and what has caused this crisis we’re in today really seems inappropriate to me,” Raymer Maguire, Campaign for Criminal Justice Reform manager for the ACLU of Florida, told the Sun.

Department of Corrections press secretary Patrick Manderfield told Easker that he simply enforces the rules that allow banning publications “found to be detrimental to the security, order or disciplinary or rehabilitative interests” of the prisons.

Easker interviewed Studer and Chris Finan, executive director of the National Coalition Against Censorship, about the growing support for the Militant’s effort to get Florida officials to stop censoring the paper. 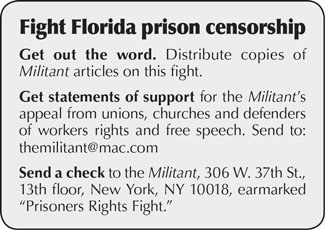 “Though NCAC typically focuses its efforts more on rights of young people to access materials and the censorship of art,” Easker writes, “Finan said the coalition was happy to join in the cause fighting censorship in prison, where he said there’s been a lot of abuse and not enough guidance from the courts.”

The Sun article also reports on a lawsuit by Prison Legal News, which has been completely banned from Florida prisons for years, allegedly because its advertising includes pen pal services and the purchase of products with postage stamps.

As the public outcry against censorship of the Militant increased, Florida officials haven’t blocked the paper since the Sept. 17 issue.

“Our success shows that it’s possible to defend the right for prisoners to read political news of your choosing,” said Militant editor Studer. “Keep the letters of support for our fight coming.”