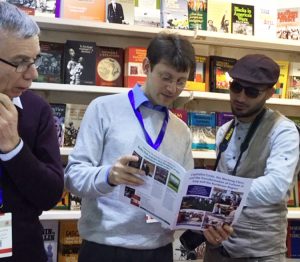 “Since 2003, we’ve had the opportunity to live more like other countries, including publishing and reading,” Wahid Wahid told this volunteer at the Pathfinder booth here. Pathfinder Books London participated in the fair for the third time.

Wahid was referring to advances by the Kurdish people in Iraq over the past 15 years, building on the establishment of the autonomous Kurdistan Regional Government a decade earlier in 1992. These national gains are among the unintended consequences of Washington’s bloody invasion and occupation of Iraq in 2003, which put an end to the decades-old dictatorship of Saddam Hussein in an effort to bolster U.S. imperialist economic, political and military interests in the Middle East.

The thirst to take maximum advantage of this moment in history was evident among the tens of thousands who attended the fair, browsing the books of some 300 publishers from over 20 countries. It could be seen in their search for literature in Kurdish as well as English and Arabic, and in the social and political questions addressed in book presentations and panel discussions. And in the interest in the views and political activity of workers from the U.S., Canada and the U.K. staffing the Pathfinder stand, where visitors purchased 1,238 books by leaders of communist and other revolutionary movements.

The book fair this year was inaugurated by Masoud Barzani, president of the governing Kurdistan Democratic Party. Days earlier, he had condemned remarks by former Iraqi Prime Minister Haider al-Abadi, who had labeled those seeking Kurdish independence as “extremists.” In September 2017, while still president of the KRG, Barzani had organized a referendum on independence for Iraqi Kurdistan, which won by a more than 90% margin with a very high turnout. Baghdad retaliated with military force — backed by Tehran, and with tacit support from Washington — seizing 40% of KRG territory, including the oil-rich city of Kirkuk.

The second speaker was veteran Iraqi politician Ayad Allawi, and a message from the Iraqi minister of culture was read to participants. The program concluded with a poem-and-song tribute to both Iraq and Kurdistan.

While all this was diplomacy, it registered something deeper about social and political realities here. The Kurdish people’s struggle for independence continues — in face of their centurylong forcible division between Iraq, Iran, Turkey and Syria — but the KRG today remains part of Iraq. Most important, struggles by working people in Kurdistan and Iraq are deeply intertwined. Visitors to the fair included not only Kurds, but Arabs and others who came from Baghdad, Basra and other parts of the country, as well as many who have fled violence and tyranny in Mosul, Iraq’s second-largest city, and its surrounding Nineveh plains and elsewhere.

Mohammed Ja’far came to the book fair from the village of Bashiqa, near Mosul, some 50 miles from Erbil. The village is home to many ethnic Christians and Yazidis who have been the targets of massacres by al-Qaeda and Islamic State forces in that part of Iraq.

Ja’far is of the Shabak ethnic minority. He told this reporter that in 2013 the public library he ran there was destroyed by Islamist forces, and he lost an eye and some of his fingertips. He is now working to revive the library and appreciated a donation we made of Pathfinder titles. Like so many others in Iraq, he lost family members in terrorist attacks.

Another visitor to the booth was Ali Abkan from Mosul. His father, a lieutenant in the Iraqi army under the Saddam Hussein regime, had been deployed as part of Baghdad’s invasion and occupation of Kuwait in 1990. That reactionary land-grab, and the U.S.-led military assault that followed, are described in “Washington’s Assault on Iraq: Opening Guns of World War III,” by Jack Barnes, national secretary of the Socialist Workers Party, published in issue no. 7 of New International magazine. Thirty-four copies were sold at the Pathfinder booth.

Among other things, Barnes describes the U.S. military’s massacre of tens of thousands of retreating Iraqi soldiers and fleeing civilians on the road from Kuwait to Basra in southern Iraq. A “turkey shoot” is how one U.S. officer callously but accurately described it.

“My father realized they were being set up for a slaughter and got himself out of there,” Abkan said. His father was recently killed by Islamic State.

Abkan said his escaped friends from Mosul have dispersed all over Iraq, from Baghdad, Hillah (modern Babylon), and Najaf to Kerbala and Basra. Facing certain unemployment, he said, many signed up for Iran-backed militias. “They were told by recruiters that if they were ready to go to Yemen, Syria or wherever — and they didn’t ask any questions — then the money is higher,” Abkan said. “Many have died.”

Tehran sponsors militias — enlisted from Afghanistan in the east and across the region — that have fought in Iraq, Syria, Yemen and Lebanon, extending the sway of Iran’s counterrevolutionary bourgeois-clerical regime. Iraq, including the Kurdish region, is caught in a tightening vise between Tehran and the U.S. imperialist rulers, who maintain thousands of troops in this country.

Working people in Mosul and the wider Nineveh province face the combined consequences of the 1991 and 2003 U.S-led invasions; some 15 years of terrorist activity, culminating in the 2014-17 Islamic State tyranny; and the area’s recapture by joint Iraqi and Kurdish forces, backed by U.S. air raids that devastated the old center of the city. Iraqi authorities have provided little reconstruction aid. In March, thousands protested over “corruption, destruction and greed” after a ferry capsized on the Tigris River, killing 100 passengers. The Iraqi parliament responded by firing the governor of Nineveh.

The Jewish Question by Abram Leon was popular at the Pathfinder booth, with 41 copies sold. Many wanted to understand where Jew-hatred and anti-Semitic scapegoating come from, as well as to learn more about how to combat the persecution of other religious and national minorities.

Other high sellers were titles addressing the roots of the crisis of world capitalism, how it’s effecting working people in the U.S. and worldwide, and pointing to an independent political course for workers, farmers and other working people. Topping the list was Are They Rich Because They’re Smart? Class, Privilege, and Learning Under Capitalism by Jack Barnes (158 copies sold), followed by In Defense of the US Working Class by SWP leader Mary-Alice Waters (76 copies). These issues were also a topic of discussion and debate at events outside the book fair, including a public meeting for communists from North America and the United Kingdom organized by the Kurdistan Communist Party (see accompanying article) and an exchange with leaders of the Kurdistan United Workers Union.

Also popular — among both women and men of all ages — were books by Evelyn Reed and others about the roots of women’s oppression and the road to emancipation, such as Problems of Women’s Liberation (30 copies), Cosmetics, Fashions, and the Exploitation of Women (26 copies), and Woman’s Evolution (14 copies).

Teheran-based Talaye Porsoo, which publishes translations of Pathfinder books in Farsi, the majority language in Iran, participated in the book fair for the first time this year. Many of those who appreciated seeing these revolutionary books in Farsi were Kurds who migrated to Iran from 1975 onwards, as the Saddam Hussein regime launched murderous attacks on the Kurdish population in Iraq. Others had gone to Iran to study. Some had participated in the 1979 revolution that overthrew the U.S.-backed dictatorship of the shah or have been active in protests against government policies there in the last few years.

Wahid, Ja’far, Abkan and others appreciated the internationalist working-class political course presented in a December 2017 statement by the Socialist Workers Party distributed at the Pathfinder stand — “For Recognition of a Palestinian State and of Israel.”

“In opposition to Washington, to bourgeois governments and political organizations across the Middle East, and to the middle class left here in the United States,” the statement says, “the Socialist Workers Party has a different starting point: the class interests and solidarity of workers and toiling farmers across the Middle East — be they Palestinian, Jewish, Arab, Kurdish, Turkish, Persian or otherwise, and whatever their religious or other beliefs — as well as working people in the United States and around the world.”

AINKAWA, Kurdistan Region, Iraq — More than 100 people attended a meeting here April 6 sponsored by the Kurdistan Communist Party to hear talks and discuss politics with leaders of the Socialist Workers Party in the U.S. and the Communist…

Front Page Articles
Feature Articles
Also In This Issue
Books of the Month
As I See It
25, 50 and 75 years ago