Socialist Workers Party candidates are campaigning all across the country, taking their working-class program to cities, towns and country lanes. They find wide-ranging discussion among working people about what can be done to defend workers and farmers from the impact of the capitalist rulers’ economic crisis and wars.

“Unions can grow as they build solidarity with the struggle of other workers,” Hamlin said. SWP candidates have been urging support for the recently concluded 11-day strike by over 30,0000 workers at Stop & Shop in New England.

“These young kids coming back from the wars are all messed up. They give them a pill and send them out the door,” Bartolotto said.

“Wars in the Mideast are an extension of the bosses’ attacks on working people here,” Rubinstein said. SWP candidates demand that Washington immediately withdraw its armed forces from Syria, Afghanistan and Korea.

They showed Bartolotto Teamster Bureaucracy by SWP leader Farrell Dobbs. Dobbs, who was a central leader of the Teamster battles in the Midwest, describes the campaign led by the union in Minneapolis to organize working-class opposition to the U.S. rulers’ imperialist aims in the Second World War. Bartolotto got the book.

“World War II was caused by competition between rival gangs of capitalists for markets,” Dobbs writes. “Further conflicts of this kind remain inevitable” under capitalism. He describes the conditions required for a socialist revolution and the kind of working-class party needed to lead one.

Driver’s licenses, Amnesty for all!

One question SWP campaigners run into often is what immigration today poses for the working class.

“I have mixed feelings about immigration,” nurse Alexis Tate told Alyson Kennedy when the SWP candidate for Dallas mayor said her campaign spoke out against the recent immigration police raid on a factory in Allen, Texas. Kennedy and George Chalmers knocked on Tate’s door in Newcastle, Texas, April 12. 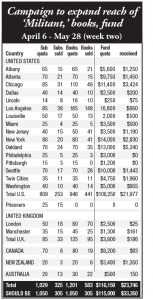 “It’s important for native born and immigrant workers to fight together for better conditions,” Kennedy said. “Winning an amnesty for workers without papers would help achieve the unity we need.” Tate wanted to find out more about the SWP and working-class battles today. She got a subscription to the Militant and three books.

Socialist campaigners Susan LaMont and Rachele Fruit met Alejandro Garza April 6 when they stopped to eat at his restaurant in Eatonton, Georgia. “I’ve lived here more than 20 years, my children were born here,” he said. “I have this restaurant, and still I can’t get a driver’s license.” After a discussion on how demonstrations were planned across the country to support driver’s licenses for all, he got a subscription to the Militant.

Returning a week later, Fruit and LaMont gave Garza flyers for the May Day protest in Athens, Georgia, demanding driver’s licenses for immigrants. He posted one on the store’s front door and put a pile on the counter. He also bought the Spanish-language edition of Are They Rich, Because They’re Smart? Class, Privilege, and Learning Under Capitalism by SWP National Secretary Jack Barnes.

The drive to expand the reach of revolutionary books and the Militant, and to raise crucially needed funds for the paper is international. In addition to the SWP, members of Communist Leagues in Australia, Canada, New Zealand and the U.K. are taking part.

“I want to see what you say about my country,” restaurant owner Ardita Litija told Communist League members Anne Howie and Jonathan Silberman when they visited her ice-cream parlor in South Wales April 20. Litija is from Kosovo and she got a copy of The Truth About Yugoslavia, Why Working People Should Oppose Intervention, co-authored by Silberman.

The book explains the bloody war in Yugoslavia in the 1990s was not a product of “age-old ethnic and religious conflicts,” as it and other wars today are often portrayed. Instead, the book’s authors explain the carnage perpetrated on the peoples of Yugoslavia was the result of a fight for land and resources by rival gangs of would-be capitalists there, and how the toll was increased by Washington’s imperialist intervention.

Litija’s daughter, Fiona, a student, subscribed to the Militant and got the book Malcolm X, Black Liberation, and the Road to Workers Power, also by Barnes. “I’ll definitely keep in contact,” she said. Hundreds of Pathfinder titles on working-class politics by revolutionary leaders are available from SWP and Communist League members at a 20% discount.

Socialist campaigners are taking the Militant Fighting Fund to workers to raise funds to cover the expenses of the paper. This is an integral part of the SWP’s seven-week drive to get out the Militant and revolutionary books.

Contributions in the first couple weeks of the drive from new and long-term readers — the bedrock of the paper’s finances — now stand at $23,746, a good start. But the pace in the seven-week effort to raise $115,000 has slowed. The next two weeks offer a good opportunity to get the fund drive back on course.

You can join the effort by contributing online at www.themilitant.com or contacting the party branch nearest you. 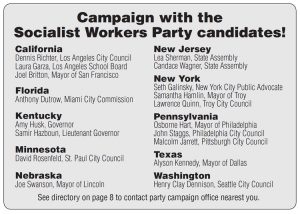 Front Page Articles
Feature Articles
Also In This Issue
Books of the Month
As I See It
25, 50 and 75 years ago