Officials at the Florida State Prison and the New River Correctional Institution, both in Raiford, informed the Militant  May 28 that they had impounded two more issues of the working-class newsweekly. That brings to five the number of issues impounded in Florida since mid-April, violating the constitutional rights of both the paper and its subscribers behind bars.

The prison system’s Literature Review Committee overturned two of the first impoundments — of issues no. 12 and 17 — but upheld the ban on issue no. 15, as usual with no explanation. The Militant  will appeal the ban on issues no. 18 and 19 and calls for reversal of the censorship of no. 15. In Florida, if any warden impounds an issue of a newspaper, every other prison is instructed to follow suit.

Attempting to justify censoring issue no. 15, prison officials pointed to a feature article on the New York leg of the national tour of Albert Woodfox, a former Black Panther Party member who spent nearly 44 years in solitary confinement in the notorious Angola, Louisiana, penitentiary. The warden at Florida State Prison claimed the article encourages activities which “may lead to the use of physical violence or group disruption” or otherwise “presents a threat to the security, good order, or discipline” of the prison.

Issue no. 18 was censored for reporting on the Militant ’s appeal of the ban on issue no. 15. Prison officials claimed that a photo showing the front page of the censored issue was “inadmissible.” In addition they charged that the “article about FDOC and mistreatment of inmates … presents a threat to security.”

Issue no. 19 was impounded by New River officials because it carried an interview by the Militant  with Woodfox.

Woodfox has been promoting his book Solitary: My Story of Transformation and Hope. Reviews of his book and reports on his tour have been printed in media from coast to coast including the New York Times  and Washington Post.

“I’ve never preached violence,” Woodfox told the Militant  in the interview. “The violence always came from the prison administration and guards trying to stop us from organizing and exposing what was going on.” Woodfox is well known for having organized to unite prisoners against rape and violence at Angola prison.

Fighting each ban — even if successful — places a burden in time and resources on the Militant  and delays timely delivery to the paper’s subscribers. 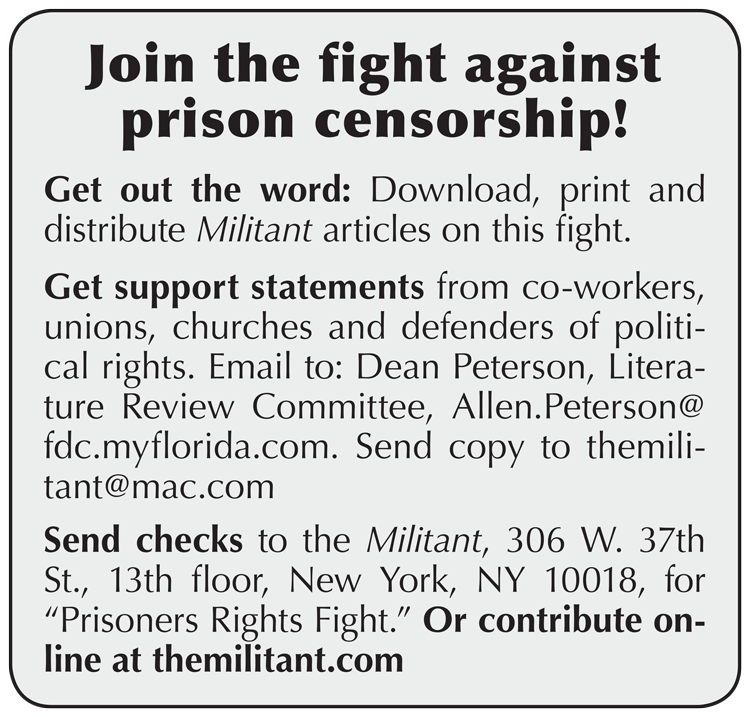 “Will Florida prison authorities try to ban every issue that covers Woodfox’s book tour, or any reports on our fight to overturn their censorship? The Militant  will not stop telling the truth,” Militant  editor John Studer said May 28.

“There is nothing in our coverage that threatens violence or disruption. Like the New York Times, Washington Post  and dozens of other papers have done, we simply tell the story of what Woodfox says and what Louisiana prison authorities did to him and countless others.”

“These officials really don’t like the Militant ’s politics, but it’s unconstitutional to censor the press because you disagree,” Studer said. “And we defend the right of our subscribers behind bars to read material of their choosing, to think for themselves, to be part of the world.”

“We call on our readers to help win support for the fight to overturn Florida prison censorship,” Studer said. “Join with Amnesty International USA, the American Civil Liberties Union of Florida, and others in this important political rights fight. Contact union officials, co-workers, student groups, church organizations, political and civil rights groups to send letters to the Literature Review Committee calling for lifting the ban on the Militant. Every statement and letter makes a difference.”