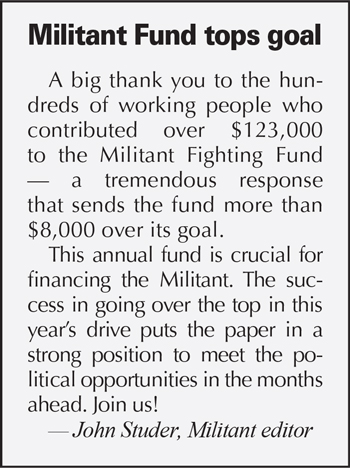 Welcome to those of you who subscribed to the Militant  during the just-concluded drive to expand the readership of the paper, bought books by Socialist Workers Party leaders and other working-class fighters, and helped raise $115,000 for the Militant Fighting Fund. Congratulations to everyone who knocked on doors or took the paper to strike picket lines and working-class protests. We went over all the goals set for the drive!

The Militant  offers a special welcome to the 33 workers behind bars who got or renewed their subscriptions. The Militant  will continue to fight the repeated attempts of Florida prison officials to bar readers from receiving it.

Many new readers picked up subscriptions and books when Socialist Workers Party candidates and their supporters went door to door in working-class neighborhoods in cities, large and small, and rural areas across the country. Socialist campaigners explain why working people need to organize independently of the bosses, their parties and government, and invite those they meet to discuss the party’s revolutionary program and join in its activities.

“We are nonunion, but we need to be union,” Manuel Duran, a dispatcher at an asphalt company in Whiting, Indiana, told socialist campaigner Dan Fein at his door, May 24. “Pay and benefits would be better.”

“Unions are needed not only to address how workers can fight together to improve pay and conditions,” Fein, who was the SWP’s candidate for mayor of Chicago, said. “But also to take on other crucial working-class questions, like opposition to the U.S. rulers’ wars. These are an extension of their assault on working people here at home.”

Duran got a subscription to the Militant  and three books on revolutionary politics, including Are They Rich Because They’re Smart?  by SWP National Secretary Jack Barnes. The book discusses the growing “openness among workers everywhere in the United States to discuss and debate the broadest social and political questions, including the stakes for the working class in organizing the unorganized and rebuilding our unions as instruments of solidarity and struggle.”

Over the seven-week campaign people have subscribed to the paper at union actions, at protests demanding driver’s licenses for immigrants on May Day, at demonstrations demanding “U.S. hands off Venezuela, U.S. hands off Cuba!” and at the largest protests in a decade defending a woman’s right to choose abortion. Members of the Communist Leagues in Australia, Canada, New Zealand and the United Kingdom joined in the circulation and fund drive.

David Rosenfeld, SWP candidate for city council in St. Paul, Minnesota, met Susannah Johnson, a nursing home worker from Hibbing, when they both joined a protest to demand abortion rights in Duluth May 25.

“I was a big Bernie Sanders supporter in 2016,” she told Rosenfeld. Johnson came to the protest with four friends.

“Sanders advocates ‘fixing’ the system we live under, to shore up the capitalists and their for-profit system,” the SWP candidate said. “Capitalism has to be overthrown.”

“The working class has the power to do that, but we have to first discover what we are capable of doing,” Rosenfeld said. “We can do that in the course of fighting to defend ourselves and speaking out against every abuse and outrage created by this system. This is the lesson from the big battles that overthrew Jim Crow segregation, and from the example of the Cuban Revolution.”

Johnson wanted to learn more and bought a subscription to the Militant  and the book Malcolm X, Black Liberation, and the Road to Workers Power, also by Jack Barnes. The book describes how Malcolm X emerged as an outstanding working-class revolutionary leader. Barnes writes that “only the conquest, and exercise, of state power by the working class and expropriation of finance capital can lay the foundations for a world based not on exploitation, violence, racial discrimination, class-based pecking orders, and dog-eat-dog competition, but on solidarity among working people that encourages the creativity and recognition of the worth of every individual.”

Johnson invited Rosenfeld to visit the Iron Range to talk more about the SWP.

Over 1,500 books on the SWP’s program and lessons from previous revolutionary battles were picked up by working people thirsty to find out more about a working-class road forward. Presentations on these questions will be at the center of the Active Workers Conference scheduled for June 13-15 in Oberlin, Ohio, hosted by the SWP.

“In the coming days we’ll encourage new readers to learn more about the campaign of Seth Galinsky, the party’s candidate for New York City public advocate, and ask them to help us organize house meetings where the campaign can get more widely known,” Róger Calero, a leader of the SWP in New York, told the Militant  May 29.

One of the central goals of the drive was to deepen the party’s ongoing week-to-week campaigning with books and the Militant  broadly in the working class. “We learned a lot this spring and got better at explaining the party’s program,” Calero said. “We will build on our experience.”

This weekly column reporting on the exchanges SWP campaign supporters have with working people will continue. Keep sending reports on your experiences in!

Every ‘Militant’ issue from 1928 to today is online!

Every issue of the Militant — from its founding in 1928 to today — is now available online, nearly 4,400 issues of the paper. Workers anywhere in the world can access and study the living history of their class, published…