As the Socialist Workers Party prepares to launch its 2020 campaign for president and vice president, the party has begun announcing a series of candidates for federal and state offices across the country (see below).

This is the SWP’s fighting campaign platform to confront the economic, social and moral crisis caused by capitalism:

UNIONS/FOR A LABOR PARTY Support workers’ struggles to organize to defend themselves, to use union power on behalf of ourselves and all working people. Workers need their own party, a labor party. One union for all drivers — taxi, Uber, Lyft, other app-based and car service drivers! Support farmworkers in their fight to organize unions and for safe working conditions.

AMNESTY FOR ALL UNDOCUMENTED IMMIGRANTS in the US, a life-and-death question for the unions to unite workers and cut across divisions the bosses use to drive down wages. For access to driver’s licenses for all.

OPPOSE WASHINGTON’S WARS US hands off Iran, Venezuela and Cuba. US troops out of Afghanistan, Korea, the Middle East. End US colonial rule in Puerto Rico.

CUBA’S REVOLUTION — AN EXAMPLE End the US rulers’ economic war against Cuba; US out of Guantánamo. The Cuban Revolution in 1959 showed it is possible for workers and farmers to transform themselves in struggle, to take political power and uproot capitalist exploitation.

HEALTH CARE FOR ALL Fight for universal, government-guaranteed cradle-to-grave health care, and retirement income for all.

ISRAEL & PALESTINE For the recognition of Israel and of a contiguous Palestinian state. For the right of Jews to return to Israel as a refuge in the face of capitalist crisis, Jew-hatred and murderous violence.

WORKERS CONTROL OVER PRODUCTION & SAFETY Capitalism’s profit drive is the despoiler of nature and cause of unsafe working conditions. Workers and our unions must fight for workers control over production and safety in the factories, mines, railroads and all energy monopolies to protect those on the job and in nearby communities, and to control emissions of CO2 and other greenhouse gases to prevent the poisoning of the air, water and soil. Workers control over production to prevent disasters like the Boeing 737 MAX.

“JUSTICE” SYSTEM Fight against police brutality, racist discrimination and the entire capitalist injustice system with its frame-ups, “plea bargains,” onerous bail and outrageous prison sentences, all of which disproportionately hit workers who are Black. For the right to vote for ex-prisoners and all workers behind bars.

POLITICAL RIGHTS Defend democratic rights — the right to vote, to free speech and assembly and to bear arms, under attack from Democrats and Republicans alike. Stop FBI and other government spying, harassment and disruption.

PRISONER RIGHTS End solitary confinement. End suppression of the Militant, books and newspapers by prison authorities. Abolish the death penalty, an anti-working-class weapon in the hands of the rulers.

FARMERS — WORKERS ALLIES ON THE LAND To put a halt to farm foreclosures, bankruptcies and skyrocketing rural debt, we demand nationalization of the land. This puts the soil at the service of the farmers who till it, as opposed to control by the banks and landlords. We demand the government guarantee farmers their costs of production, including their living expenses.

Working people must organize and act independent of the ruling capitalists and break from their political parties — the Democrats and Republicans. For a labor party and a movement of millions to fight for these demands along a course to replace the rule of the exploitative capitalist class with a workers and farmers government. 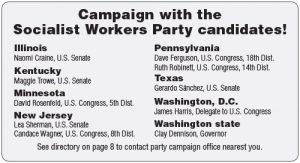