In an outrageous effort to ban photographs of workers raising their fists in labor and other battles, Florida prison authorities have banned issue no. 13 of the Militant. This is the first time in eight months the paper has been suppressed.

A letter received April 17 from officials at the Jefferson Correctional Institution in Monticello, Florida, informed the Militant that issue had been impounded.

The reason? “Gang signs: pgs. 1, 5, 14 and 16.” But what the photos show are workers organizing to defend their rights, safety, dignity on the job and to build unions. The only common element is workers raising their fists in the air as part of their protests.

One photo appears twice — on page 1 and on page 16, the first page of the Spanish-language section of the issue. It shows a worker at the Perdue chicken processing plant in Kathleen, Georgia, raising his fist in the air as he and his fellow workers walk off the job March 23 to protest work and safety conditions there.

The fourth photo depicts members of United Steelworkers Local 8888 during their historic battle to organize a union at the Newport News, Virginia, shipyard in November 1979, a strike covered in hundreds of newspapers and other publications for decades.

Prison officials now claim these raised fists are all just gang signs, “a threat to the security, good order, or discipline of the correctional system or the safety of any person.”

Raised fists as part of public protests got its widest media coverage in 1968, when U.S. Olympic team sprinters Tommie Smith and John Carlos raised their fists on the winners podium at the Summer Olympics in Mexico City to protest racist discrimination. “It was a cry for freedom and for human rights,” Smith told Smithsonian magazine in 2008.

The Smithsonian Institution has on exhibit the track suit Smith wore and a box he held on the podium, which contained an olive branch, as well as the shoes he raced in.

This iconic photo was splashed on front pages all across the country. Standing with them was silver medal winner Peter Norman, a racer from Australia from a working-class background.

Norman told the press he was familiar with racism from his experiences with the Australian rulers’ “White Australia” policies and their discriminatory treatment of Aboriginal peoples. He wore the badge of the Olympic Project for Human Rights around his neck on the podium, a group Smith and Carlos had helped organize months before.

Would Florida prison authorities have banned all these papers?

Anytime authorities at any Florida prison seize a copy of the Militant, the issue is taken from all 48 subscribers in prisons across the state.

‘We will fight to reverse this’

The Militant’s attorney, David Goldstein, informed Florida’s Department of Corrections Literature Review Committee — which reviews all suppressions of newspapers and other literature — that the paper is preparing to appeal this impoundment, and that it is obviously improper. The Militant has appealed every instance when the paper has been banned, the vast majority successfully.

He was told the committee has already scheduled a review of the ban for April 23. If the committee refuses to overturn it, the paper will appeal. 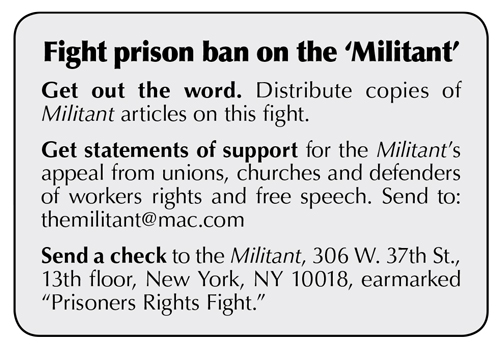 Last year 14 out of 16 issues of the Militant were impounded over three months. Florida authorities, who received dozens of protest letters from the Florida American Civil Liberties Union, American Library Association, PEN America and many other organizations and individuals, overturned most of these bans and stopped seizing further issues in mid-August — until now.

“The prison authorities’ ban is a clear violation of freedom of press and of the right of our subscribers behind bars to read the paper,” said Militant editor John Studer. “We will fight to reverse this.

“If they think they can ban every symbol of workers’ struggles, they’re in for a surprise,” he said. “Workers behind bars are part of the world. They have the right to consider different views and form their own opinions. They have the right to read about workers’ actions to defend jobs, wages and working conditions, against racist discrimination and violence, and to defend their rights in the midst of today’s economic and social crisis caused by the capitalist system.”