Russian President Vladimir Putin Feb. 21 declared that the Moscow-backed “People’s Republics” of Donetsk and Luhansk set up in Ukraine in 2014 were independent countries and ordered Russian troops to go in as “peacekeepers.” The Kremlin’s invasion is backed by the largest military mobilization on the European continent since World War II.

“The Socialist Workers Party demands Moscow pull its tanks and troops out of Ukraine and respect the sovereignty of Ukraine,” Joanne Kuniansky, Socialist Workers Party leader and candidate for the U.S. House of Representatives from New Jersey, told the press the next day. “Since the Bolshevik Revolution broke apart the czarist prison house of nations in 1917, the communist movement has backed the right of Ukraine and all nations to self-determination and independence.

“The SWP also demands Washington keep its military might out of the region,” Kuniansky said. “The U.S. capitalist rulers are not interested in Ukraine independence, but in their own imperialist interests in the region and in weakening Russian competition. The aspirations of Ukrainian workers and farmers can best be defended by their own mobilization and action — as they did in the Maidan revolution in 2014 — and solidarity from working people worldwide, including in Russia.”

Moscow’s goals are to reassert the Russian rulers’ lost sway over Ukraine, and over all of the Eastern European territory it lost control over with the implosion of the Soviet Union in 1991. And it seeks to push back against U.S.-led NATO expansion in Eastern Europe. 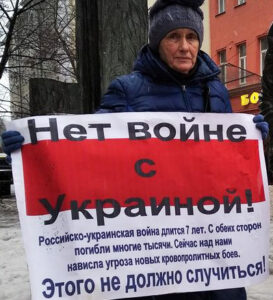 Moscow’s war sets in motion the threat of deadly and uncontrollable consequences for working people in Ukraine, Russia, Belarus and beyond.

In a major speech Feb. 21, Putin justified Moscow’s invasion, claiming Ukraine is a fake country that belongs inside Russia. He blamed its existence on V.I. Lenin, the Bolshevik Revolution and its defense of the right to self-determination.

Putin also demands Washington guarantee the exclusion of Ukraine from NATO, and that NATO military forces be withdrawn back to their 1997 lines.

Moscow and Minsk announced Feb. 20 that 30,000 Russian troops in Belarus for joint military exercises would stay in position on the Ukrainian border. Belarus President Alexander Lukashenko is a close ally of Putin after relying on Moscow’s help to brutally suppress mass protests resisting his theft of the elections in 2020.

Svetlana Tikhanovskaya, Belarus’ opposition leader exiled after winning those elections, told the press Feb. 23 that the people of Belarus don’t want Moscow’s troops “on our lands. We do not want to be a country that is an aggressor to our Ukrainian brothers.”

Tens of thousands of Russian soldiers are also in Crimea, with dozens of Russian warships and landing craft in the Black Sea. All told, the Kremlin now has up to 200,000 troops either in eastern Ukraine or poised along its borders.

Acting to protect U.S. imperialism’s economic and strategic stakes in the region, the Pentagon doubled the number of U.S. warships in the Mediterranean Sea, with an aircraft carrier group redeployed from the Pacific. The nearly 5,000 U.S. troops in Poland are working with Polish forces to prepare for an anticipated flood of Ukrainian refugees when war breaks out. Israel is making preparations for refugees who are Jewish.

The U.S. rulers and their allies have sent some “defensive” military hardware to Ukraine. But they are determined to avoid being drawn into a military conflict in defense of the country’s sovereignty, or to allow it to “spill over” elsewhere.

Instead, Washington has begun implementing sanctions against “new investment, trade and financing” by U.S. entities in Russia. These sanctions will come down hardest on the Russian people, but will also have an economic impact across Europe. Berlin has temporarily suspended the controversial Nord Stream 2 gas pipeline from Russia, which will exacerbate energy shortages in Germany and elsewhere on the continent.

The Russian president’s speech attacked Ukraine’s right to exist, denying it had achieved “stable statehood.” He claimed it was “an inalienable part” of Russia’s history and culture. He condemned “the severing of what is historically Russian land” by the Bolshevik Revolution.

There was a brief period during the early Russian Revolution — in the 1920s while Bolshevik leader V.I. Lenin was alive — when the independence, the culture and the languages of Ukraine and other oppressed nationalities were encouraged. This was the Ukraine of which Lenin was “the author and architect,” in Putin’s words. This was brutally reversed as part of a bureaucratic counterrevolution against Lenin’s policies led by Joseph Stalin.

Putin, harking back to the Russian Empire, is driven by the expansionist appetite of Russia’s capitalist class to try to restore its domination over oppressed nations that were formerly part of the Soviet Union. Putin said that it was “madness” in 1991 for Moscow to give “these republics the right to leave the union without any terms and conditions.”

The nationalist “disease” Lenin and the Bolsheviks fought against was Great Russian chauvinism, the nationalism of the oppressor at the heart of the domination by the Russian Empire, both under the czars and later under the Stalinized Soviet Union. For more on this see the article, “Communist continuity backing Ukraine independence” in the Feb. 21 issue of the Militant.

Thousands across Ukraine from Kyiv to Odessa rallied Feb. 20 to remember the dozens of people who died eight years ago during a popular uprising known as the Maidan that toppled the pro-Moscow regime of President Viktor Yanukovych.

Significantly, given the Kremlin’s harsh clampdown on any opposition, handfuls of protesters gathered in Moscow the same day with signs like “Russia, do not touch Ukraine!” before they were arrested. In Rostov-on-Don, in southwestern Russia, close to the Ukraine border, more individual protests took place. Tatiana Sporisheva, 45, told CBC, “We don’t have big protests anymore, but that doesn’t mean that people accept” war against their Ukrainian neighbors.

With Putin’s Feb. 21 decision, Moscow confirmed “Russia’s status as an occupying power” in the “armed aggression against Ukraine that started in 2014,” the Ukrainian Helsinki Human Rights Union and the Kharkiv Human Rights Protection Group noted in their statement the following day. Calling the Maidan a “coup,” Putin responded in 2014 by seizing the Crimean Peninsula and supporting the separatist conflict in the east with Russian arms and forces. That conflict has already taken 14,000 lives and displaced nearly 2 million people.

The two rights groups warned about “politically motivated persecution of those who disagree with the occupation” and the “forced relocation of people to Russia” now underway in eastern Ukraine.

In Ukrainian-controlled areas of Donbas, residents are bracing for a renewed Russian offensive. Mikhail Karablin, 67, who was born in Russia and moved to the Ukrainian town of Konstyantynivka more than 40 years ago, told the Wall Street Journal Feb. 22 that he dreads the possibility his adopted town could fall to separatist forces.

“They’re a plague, they came to this land with guns and turned Donetsk into a wasteland,” he said.

Moscow’s recognition extends to the separatists’ self-proclaimed borders, the entire Ukraine provinces of Donetsk and Luhansk. This area, almost two-thirds more than what they now control, was retaken by Ukrainian forces after months of fighting in 2014.

The Russian government’s invasion of Donetsk and Luhansk is a blow to working people in Ukraine, Russia and worldwide. It must be opposed.  Like its occupation of Crimea in 2014, Moscow’s violation of Ukrainian sovereignty is aimed at advancing the…