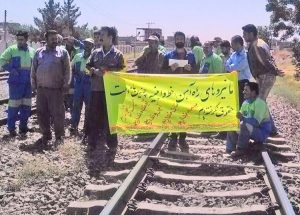 A new round of protests and strikes are unfolding across Iran, following the working-class-led protests that took place in late December and early January. They’re fueled above all by the impact on the working class of the wars conducted by the country’s capitalist rulers.

For years the capitalist regime in Tehran has recruited workers from Iran, and offered inducements to refugees from other countries, to fight and die in bloody conflicts it is waging in Syria, Iraq and Yemen. Through these wars Tehran extended its counterrevolutionary military and political influence, dealing blows to working people in Iran, in countries across the region and intensifying its decadeslong conflicts with the rulers in Tel Aviv and Washington.

The Donald Trump administration is seeking to defend the U.S. rulers’ interests in the Mideast by reaching out to Moscow for help in getting Tehran to withdraw its forces from Syria and back off from collaborating with Hezbollah in Lebanon and Houthi militias fighting in Yemen’s civil war. Washington in May withdrew from the nuclear pact that the Iranian government signed with former President Barack Obama, and the rulers in the U.K., France, Germany, Russia and China. Trump reimposed a series of economic sanctions Aug. 7, saying the punitive steps are aimed at forcing the Iranian government into negotiations.

These measures “will fall hardest on working people already shouldering the bloody consequences of the Iranian rulers’ wars,” Margaret Trowe, Socialist Workers Party candidate for U.S. Senate from New York, told the Militant. “Working people here should stand with fellow workers in Iran and against our common class enemy — the U.S. propertied rulers. The SWP demands the sanctions be lifted immediately.”

Widespread unrest swept 90 cities and towns earlier this year after President Hassan Rouhani attempted to deal factional blows to opponents in the government by disclosing huge budget increases in military spending to fund the armed forces operating in Iraq, Syria and elsewhere.

Calls for the end of Iran’s anti-working-class regime were raised in the new round of protests in Arak, Isfahan, Karaj, Shiraz, Tehran and many other cities and towns. Both men and women have participated.

Truck drivers in the Kurdish region who went on strike demanding a 20 percent wage increase in May restarted their strike in late July.

Some 7,000 rail track workers who haven’t been paid for two months walked out July 20 in Arak, Azerbaijan, Isfahan, Khorasan, Lorestan and Zanjan. They are demanding payment of back wages, permanent jobs, the right to form a union and the right to protest.

Demonstrators blame the government for putting its resources into military operations in Syria, Lebanon, Yemen and elsewhere, and ignoring the plight of workers.

“They say they have no money,” Isma’eil Bakhshi said at an earlier protest, reported Radio Farda. “The workers have no money either. But the difference is that we are experts in sugar cane processing, and we will manage the operations ourselves.” He was arrested along with a number of other workers.

Targeting the rulers’ wars and support for Hamas — the governing party in the Gaza Strip — and Hezbollah in Lebanon, crowds chanted, “No to Syria!” “Not to Gaza, not to Lebanon. May my life be sacrificed for Iran,” in addition to “Death to inflation! Death to unemployment!” shown in videos posted on social media. “Our enemy is right here. They lie when they say it’s America,” was chanted, according to Radio Free Europe.

“Why should we struggle with daily issues and risk our lives to fill the pockets of corrupt people?” a 61-year-old former Revolutionary Guard named Ali told the Wall Street Journal. The price of food has gone up by 50 percent since the start of the year while the rial, the Iranian currency, has fallen by 80 percent, adding to the mounting discontent.

In response to Washington’s decision to reimpose sanctions, Iranian President Rouhani boasted that through its military interventions Tehran’s power now reaches “from the east to the [Indian] subcontinent, from the west to the Mediterranean, from the south to the Red Sea and from the north to the Caucasus.”

The roots of these wars lie in the counterrevolution carried out by the country’s capitalist rulers in the early 1980s. They sought to turn back gains made by workers, farmers, women and the oppressed during a popular revolution that overturned the rule of the U.S.-backed shah of Iran in 1979. That massive uprising and the struggles it opened up boosted the courage and self-confidence of millions of toilers to fight for their interests.

The Iranian rulers consolidated their counterrevolution at home by extending it abroad into Syria, Iraq and elsewhere. More than 10 million people in Syria have been displaced, killed or maimed in the country’s civil war, as Tehran and Moscow propped up the Bashar al-Assad dictatorship there. Hezbollah provided crucial ground troops for the weak Syrian army, and Tehran supplied weapons to Hezbollah. With the Syrian war winding down, these weapons are being turned to threaten Israel. Other militias Tehran recruits and funds are entrenched in Iraq.

Washington seeks to answer these advances and reinforce its position as the dominant imperialist power in the region. White House officials say they are organizing a new “security” bloc — the Middle East Strategic Alliance — with the governments of six Gulf Arab states, Egypt and Jordan “as a bulwark against Iranian aggression.” The imperialist-backed bloc would deepen co-operation on military training and missile defense.

The Aug. 7 sanctions Washington has imposed aim to prevent companies from trading in dollars, gold, aluminum, steel and coal. It also ends imports into the U.S. of Iranian-produced food. A further round of U.S. sanctions are due to go into effect in November. As Washington threatens to vigorously enforce these measures, capitalist bosses across Europe, whose governments oppose the sanctions, largely say they will abide by them to avoid losing access to U.S. markets.