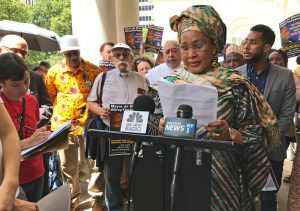 Jurors took only hours to find that Detective Edwin Mateo used excessive force in firing the shot that killed Mohamed Bah. Bah was a student as well as a taxi driver. Concerned that her son was suffering from depression, Hawa Bah had called 911 for an ambulance.

What she got instead was nine heavily armed cops. Rather than providing medical help, the cops broke into his apartment. When Mateo was hit by one of the cops’ own Taser shots, he fell to the floor. Mateo yelled twice, “He’s stabbing me. Shoot him.” Bah was shot eight times, the last fatal bullet by Mateo while Bah lay incapacitated on the ground. In a deposition for the trial, Mateo finally admitted that his claim that Bah stabbed him, justifying the shooting, was false.

“Last November some of the truth came out. Our family thought we could finally have some closure,” Bah told the press. “But Mayor de Blasio reopened the wound. We will keep fighting because we want the truth to be told.”

“By continuing to protect abusive police officers — like those who killed Saheed Vassell, Eric Garner and Delrawn Small — through hiding the names and information about the officers and delaying disciplinary processes,” Bah said, reading from a letter she delivered to City Hall after the press conference, “you send a message to the entire NYPD that they are above the law and can kill and brutalize New Yorkers with impunity. ” She asked for a meeting with the mayor.

Joining Bah were family members of others killed by the police in this city. “I’m here to stand with Hawa Bah,” said Gwen Carr, mother of Eric Garner. “For years the de Blasio administration and NYPD stalled the disciplinary process against Daniel Pantaleo, who put my son in a chokehold. And they are refusing to move forward with disciplinary processes for all but two of the officers involved in killing my son. We ask Mayor de Blasio to do the right thing and fire all of the officers in all of our cases.”

“There is no basis for appeal. The evidence against the cops is overwhelming. The fatal shot, after seven others, was from 18 inches away,” Randolph McLaughlin, a Bah family attorney said. “There can be no closure until the appeal is dropped or we win, and we will win.”

The city continues to try and shield the cops. In a May hearing, Judge Kevin Castel ruled against the city’s demands for qualified immunity for Mateo.

So the civil trial was the only time the cops had to go to court. There the cops and the city had to back off a number of former claims about important evidence. For years they said that the clothes Mohamed Bah was wearing when he was killed had been destroyed by the hospital staff where his body was taken. Later they claimed the garments had been sent to the funeral home. Then they admitted at the trial that they had them in NYPD custody the whole time.

“It is unforgivable to me that either through malevolence or incompetence this would not have been discovered,” Judge Castel said when the city admitted this at the civil trial.

City officials had said the knife that Mateo swore Bah threatened the cops with had been lost. Then they admitted to having it all along, but claimed it was “contaminated” from Hurricane Sandy.

All the missing evidence played a role in the federal and Manhattan prosecutors deciding they didn’t have enough evidence to indict the cops.