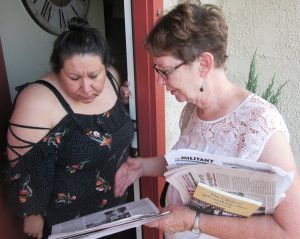 “I know all about Santos Rodriguez! I grew up in southwest Dallas,” Victoria Dominguez told Alyson Kennedy, Socialist Workers Party candidate for U.S. Senate from Texas, when she knocked on her door July 30. “You need to meet my mother. She was a machine operator and stood up for her rights on the job. She was forced to drink from the ‘Blacks only’ fountain in 1954.”

Dominguez lives in Waxahachie, part of a farming and manufacturing area south of Dallas. She referred to a feature article in the Militant  she had just seen about the 1973 cop killing of 12-year-old Santos Rodriguez. The protests after his killing were part of the rise of a powerful movement fighting against discrimination against Chicanos and Mexican immigrants, inspired by the movement for Black rights in the 1950s and ’60s.

“The movement led by Black workers accomplished a social revolution, overthrowing the Jim Crow system of legal segregation,” Kennedy said. “It broke down racist divisions the bosses and their government fostered between us.”

Meeting workers and farmers on their doorsteps is the foundation of the SWP’s work. It offers the party the opportunity to discuss the political issues and labor battles confronting working people today.

Dominguez works in an office that processes loans. She told Kennedy that a lot of the loans people come looking for are to pay for medicine and health care. “It really fumes me,” she said, “when you’re in your 50s, 60s or 70s and can’t afford medication.”

“My campaign stands for government-funded health care for all,” Kennedy told her. “Working people produce all the wealth. We need to transform the labor movement to lead the kind of broad social struggles powerful enough to fight for and win retirement and health care for all.”

Dominguez said she wanted to follow these kinds of discussions and signed up for the Militant. She also got a copy of Are They Rich Because They’re Smart?  by SWP National Secretary Jack Barnes, one of five books on special with a subscription. (See ad below.)

Workers need to fight for amnesty

Kennedy met Willie Armstrong, 44, who works in a cabinet factory in Waxahachie when she knocked on doors in nearby Ennis. “The company has no break room,” he told her. “We work near ovens in 130-degree heat every day.”

Armstrong said that there are Caucasian, Black and Mexican workers in the plant. The bosses create divisions by “giving promotions to workers with no green card,” he said, “but nothing for workers who have worked there longer.”

To defend the working class the labor movement needs to chart a course to unify the millions of toilers in independent political action, Kennedy said, regardless of where they came from or what “papers” they have. The SWP calls for amnesty for all workers who live here. This is essential to unite the working class against attempts by the bosses to divide us and drive down wages and working conditions for everybody.

“We are the only ones who will organize to fight to change the conditions we live and work in every day,” she said.

Kennedy has decades of experience building the labor movement and is a 14-year veteran union coal miner. From 2003 to 2006 she was in the front ranks of a union-organizing battle at the Co-Op mine outside Huntington, Utah. The miners, in their majority immigrants from Mexico, fought to unionize with the United Mine Workers for safer working conditions, an end to abuse by the bosses and for higher wages.

Armstrong decided to sign up for a subscription and asked for extra copies of the paper to give to friends at work. He said he wants to introduce some of his co-workers to the SWP candidate.

“I have been looking for something like this,” Peter Kim, an information technology worker, told Jacquie Henderson, Socialist Workers Party candidate for Minnesota governor, when she came to his door in Richfield, south of Minneapolis, Aug. 5. “I’m not even considering the Democrats or Republicans. I had thought of maybe looking for the Greens, but really don’t think they’re much different. I had no idea there was anything out there for working people.”

“You’re right that the Green Party and other supposedly independent candidates aren’t different,” Henderson said. “They say we can reform the capitalist system to make it better. That’s impossible. We need to unite together to overthrow capitalism, to fight for a workers and farmers government.”

On July 12 Henderson joined Teamster retirees and members on a bus to Columbus, Ohio, where thousands of union miners, Teamsters and other workers rallied to defend their pensions.

“I work up the street at Walmart,” she told Kim. “We don’t get any pensions, but several of my co-workers wrote messages to the rally supporting the fight for government-funded retirement pay at union wages for all workers. We are part of the struggle to rebuild the union movement to lead battles like this.”

Kim got a subscription and The Clintons’ Anti-Working-Class Record: Why Washington Fears Working People,  another book by Barnes on special.

“I had no idea that the U.S. became the world’s top jailer under Clinton,” he said, browsing through the book. “Let me know about your activities.”

Baskaran Appu and other members of the Communist League went door to door Aug. 4 in the Takanini suburb of Auckland, New Zealand. They met Jessica Brady, a student nurse. While talking, the importance of defending free speech came up.

A public meeting scheduled the day before for two speakers from Canada, labeled “alt-right” by the media, was cancelled after left groups and liberals campaigned to deny them visas and a place to meet. Appu explained that the CL totally opposes this campaign.

“But what about ‘hate speech’?” Brady asked.

“Laws against ‘hate speech’ don’t eliminate racism. Who decides what is ‘hate’? They just give the capitalist rulers a tool to use against us when we want to protest or go on strike,” Appu said.

“Yes, or Maori fighting for their land,” Brady added, as she signed up for a subscription.

To join the campaign, contact the SWP or Communist League branch nearest you. 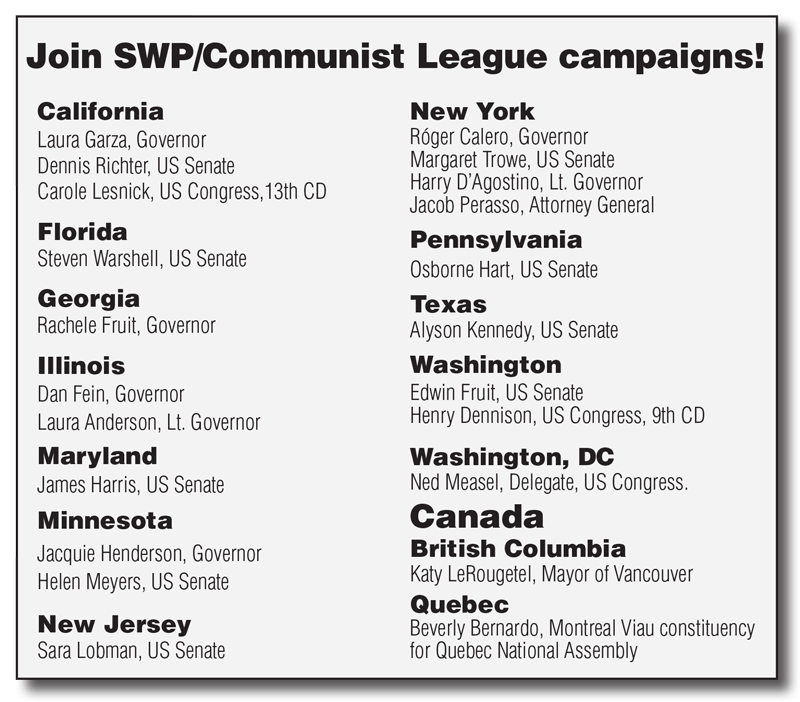 The following statement by Róger Calero, Socialist Workers Party candidate for governor of New York, was released Aug. 8. The crisis facing working farmers and ranchers and the pressing need for the unions to mobilize solidarity with their struggles was…