NEW YORK — “Workers need to have unions to defend ourselves from the bosses, organize solidarity with others involved in labor and social struggles, and unite the working class,” Róger Calero, Socialist Workers Party candidate for governor of New York, told workers at the UPS barn in midtown Manhattan Oct. 22.

UPS workers had just voted down a two-tier concession package the bosses demanded, only to be told by Teamster union officials that they considered the contract had passed. “Our unions have to fight for what we need, for everyone, organized or not, and demand the government fund social needs — for health care, retirement and education,” Calero said.

“Workers need our own party, a labor party based on the unions,” he said, “independent of the Democrats, Republicans and all others who represent the interests of the capitalist rulers. We need to take political power into our own hands.” 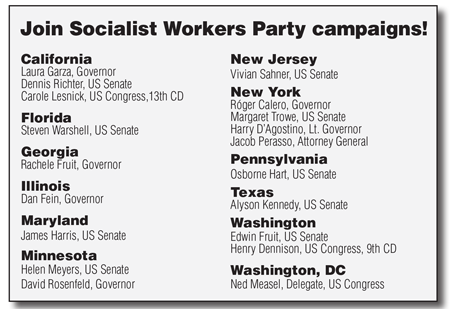 Calero is one of 19 SWP candidates running for U.S. Senate, governor or the House of Representatives across the country in the Nov. 6 election. The party is campaigning on workers’ doorsteps, at strike picket lines, and at protests and rallies.

“Less than 7 percent of workers in the country’s factories, mines, mills, warehouses, retail stores and other private employment have a union today,” Calero said. “But the carnage we face from the bosses and their government that place the burden of the crisis of their capitalist system on our backs is making us think about how we can change things fundamentally.”

“This is the first job I ever had,” Carlos Ramos, 29, who works as a preloader at the UPS customer center, told Calero. “I grew up in the projects in Harlem and didn’t think much about things around me when I was younger.

“I began to see that the union was important to fight the constant push to make us work faster,” he said. “And it brings us together, people from all kinds of different backgrounds.

“It made me want to start reading, to learn why things were the way that they are,” Ramos said.

He was excited to see the Militant, and books by party leaders like Are They Rich Because They’re Smart? and Malcolm X, Black Liberation, and the Road to Workers Power. Calero made an appointment to get together with Ramos at the end of the week so he could buy them and start reading.

“I came here because it had a union. The company I was with before had no protection or benefits,” Ricardo, a delivery truck driver originally from Puerto Rico, told Calero.

“The challenge we have as workers and as a class is to extend those same protections to all workers, including the unemployed,” said Calero. He pointed to the Militant article on how port truckers in Los Angeles and the Teamsters local they’re fighting to become members of are championing the defense of immigrant members who face deportation.

“The labor movement needs to do that at a national level and raise the demand for amnesty for all undocumented immigrants living in this country,” Calero said.

“You make the money but you never see it. The system sucks it right back,” said Aristide, a pedicab driver, at the Columbus Circle entrance to Central Park. Some of the pedicabbies, originally from Senegal, Mali, Burkina Faso and other African countries, also work as yellow cab drivers during the “off-season.” They know firsthand the pressures faced by drivers for yellow cab companies, Uber and other ride-share companies. So far, seven drivers have committed suicide under the burden of spiraling debt.

The drivers explained how they had successfully defended themselves from moves by Democratic Party Mayor Bill de Blasio to move the nearly 300 pedicab drivers, as well as horse carriage drivers, into Central Park blocking their ability to pick up riders at the entrance and making it harder to make a living.

“Uniting the pedicab and horse carriage drivers might seem like a small thing, but it was a powerful experience for us,” said Aristide. “If we hadn’t united, they would had banned us, and a lot of families would have been affected.”

Vivian Sahner, SWP candidate for U.S. Senate in New Jersey, joined a rally against police brutality outside the offices of the Fraternal Order of Police in Newark Oct. 22.

Sahner was interviewed by Zechariah Jackson from BASA News, speaking out against police brutality in New Jersey, like the 2014 killing of Jerame Reid by cops Braheme Days and Roger Worley, captured on their own dashcam video. She met Reid’s stepfather Muneer Muhammed at the protest.

Sahner pointed to the revolution made by workers and farmers in Cuba as an example for working people in the U.S. Jackson asked her whether this is possible in this country.

“They always underestimate us,” she said in the interview, which is posted on YouTube, talking about the capitalist rulers. They said it was impossible we could do something like the civil rights movement that overthrew Jim Crow segregation, Sahner said. It is the working class that produces leaders like Malcolm X, she told Jackson.

Sahner met a worker named Daniel at the protest who responded to what she raised about the Cuban Revolution. He said he was glad she was running against both Republican Robert Hugin and Democrat Robert Menendez. “I can’t vote for Menendez because he’s against Fidel Castro and Cuba,” he said. “I’m for Castro and the Cuban revolution.”

Laura Garza, SWP candidate for governor of California, joined striking hotel workers picketing outside the Oakland Marriott City Center Oct. 20. She marched alongside Jason Russell, a banquet server, who said this was the first strike he had ever been in.

The Marriott bosses are demanding workers do more while they want to attack their health care and wages. (See story on front page.) “The more people hear our story, the more they will understand why having a union is so important,” Russell said.

“The only way to counteract the bosses’ efforts is to unite in struggle to fight for workers’ rights,” Garza told him. “That’s why what you are doing is so important. And why I’m here with you today.”

The SWP asks workers to join in getting out the word about their candidates and program for independent working-class political action.

Eric Simpson in Oakland contributed to this article.

Back striking hotel workers: ‘One job ought to be enough’

SAN FRANCISCO — Chants of “One job should be enough” and “What do we want — contract!” echoed through the streets as over 1,000 hotel workers marched here Oct. 20, stopping outside four of the seven Marriott hotels where workers…

PITTSBURGH — Carrying signs saying, “Hospital Workers Rising” and “UPMC: Respect Our Rights,” 100 hospital workers and supporters from the United Steelworkers and other unions carried the fight for a union to the heart of downtown Pittsburgh, the headquarters of…

BOLTON, England — “We’re not invisible any more!” Tina Travers, a porter and Unison member, told a rally of unionists on strike at Royal Bolton Hospital here Oct. 12. This was the second day of a two-day walkout by over…

Demand amnesty for all immigrants in the US!

The following statement was released Oct. 24 by Róger Calero, Socialist Workers Party candidate for governor of New York. The capitalist economic crisis is taking a heavy toll on workers around the world. And the imperialist plunder of the semicolonial…