“I know you!” retired coal miner Jake Westerfield told Socialist Workers Party member Jacquie Henderson when she and Steve Packard knocked on his door Oct. 20 in Beaver Dam, a town of 3,500 in a coal mining region 100 miles southwest of Louisville, Kentucky. The town has suffered many mine closures in recent years. “I met you at a rally in Columbus, Ohio, last July. I was there with miners and other unionists fighting for our pensions. Come sit down and talk.”

Westerfield, a member of the United Mine Workers of America for decades, was part of the 110-day miners strike in 1977-78. “The big thing about that strike was that we shut it all down across the country and refused to move any coal until we got a contract we could work with. We need that kind of sticking together today and we need young people like this guy,” he said, pointing to Packard.

Packard showed him the Militant and told him how some striking Teamsters at a concrete plant in Louisville told him how important it is to learn from workers’ struggles around the world covered in the socialist paper. “I read that paper every week,” Westerfield said. “My neighbor brings it over to me. She signed up at the rally in Columbus.”

He bought Are They Rich Because They’re Smart? by SWP National Secretary Jack Barnes, one of five books on special.

The SWP is on an eight-week campaign to win 1,400 Militant readers, sell 1,400 copies of the special campaign books listed on page 4, and collect $100,000 for the Socialist Workers Party-Building Fund. The drive is aimed at strengthening the central work of the party — knocking on workers’ doors in cities, towns and rural areas across the country to discuss what we face today and the need for the working class to build unions and organize our own political party, a labor party. As we go to press, 368 subscriptions and 291 books have been sold and $7,118 has been collected for the fund.

‘I’m all for what you’re doing’

“The capitalists are making big profits today while workers make low wages, and many of us have to work more than one job to make ends meet,” Helen Meyers, Socialist Workers Party candidate for U.S. Senate, told Ramón Cuellar on the porch of his trailer in Roseville, Minnesota, Oct. 21, when I joined her campaigning.

“I have to work two jobs — construction during the day and as a bartender at night,” Cuellar said. “I’m all for what you’re doing. Just let me know and I’ll come to protests or other activities.” Cuellar subscribed to the Militant and got a copy of The Clintons’ Anti-Working-Class Record.

At another trailer Bill, a van driver at a large manufacturing company and a single father, told Meyers, “I have to work on a strict budget. After I make payments on my trailer and my truck and cover utilities and food for me and my son, there’s not much left.

“It seems like us middle-class people work hard and can barely keep afloat,” he said, “while the rich are doing fine and the poor get state assistance.”

“Most people want to work and don’t want to be on welfare,” Meyers responded. “Bill Clinton pushed through an end to ‘welfare as we know it’ when he was president. A lot of women with children can’t get jobs that cover the cost of child care. I think we need unions and a working-class party that fights for jobs, for higher wages and to unify workers.”

“It will take a lot of people getting together to do that,” Bill said, getting a copy of the Militant and asking her to come back to talk more.

“I’m union, but I don’t have much use for them. It would be different if they did what they say they stand for,” Carmichael told Measel. “I make $23 an hour, but the hotel workers next door make minimum wage.”

“We need a fighting union movement that involves all the members, organizes the unorganized, speaks out for the struggles of all the oppressed and exploited, and breaks politically from the bosses’ Democrats and Republicans,” Measel said. “The power of workers is in their unity. When we use our unions, we can begin transforming them. What workers need is a labor party that thinks socially and acts politically to defend the working class.”

“Sign me up,” Carmichael said. He got a Militant subscription and Are They Rich Because They’re Smart?. Later when Carmichael passed Measel and another SWP member talking with his neighbor down the street, he called out, “Give them a shot, they’re good people!”

In Dagenham, England, east of London, Communist League members Hugh Robertson and Paul Davies talked with plumber Lennie Spence Oct. 21 about the withdrawal of the United Kingdom from the European Union, known as “Brexit,” that was passed in a 2016 referendum but has been stalled since by a wing of capitalist class politicians, including Conservative Party Prime Minister Theresa May and the leaders of the Labour Party.

“People knew what they were voting for when they voted for Brexit,” Spence said, “but because the vote didn’t go the politicians’ way, they’re desperate for us to vote again. It’s like when millions marched against the Iraq war and they just ignored that too.”

“The European Union is a bosses association. It’s not for working people,” Davies responded. “But our biggest challenge is to stop relying on the capitalists’ parties and their domestic and foreign policy. Whether the U.K. is in or out of the EU, workers need to organize independently and build our own party.” Spence got the Militant and asked Robertson and Davies to come back next week for more discussion.

Frances Washington, a retail co-worker of Milly Townsend in Albany, New York, gave her $20 for the Party-Building Fund on payday Oct. 19. “This is a way I can help out what you and your party are doing,“ she said.

Washington has a Militant subscription that her 17-year-old daughter shares, and is reading Malcolm X, Black Liberation, and the Road to Workers Power and “It’s the Poor Who Face the Savagery of the US ‘Justice’ System: The Cuban Five Talk About Their Lives Within the US Working Class. She got the book about the Cuban Five’s experience in prison to learn more about what workers face there. Her son and brother are prisoners in New York and Florida respectively.

The SWP invites readers to join in the effort to take the party, its literature and its program to workers. Contact the SWP or Communist League branch nearest you. 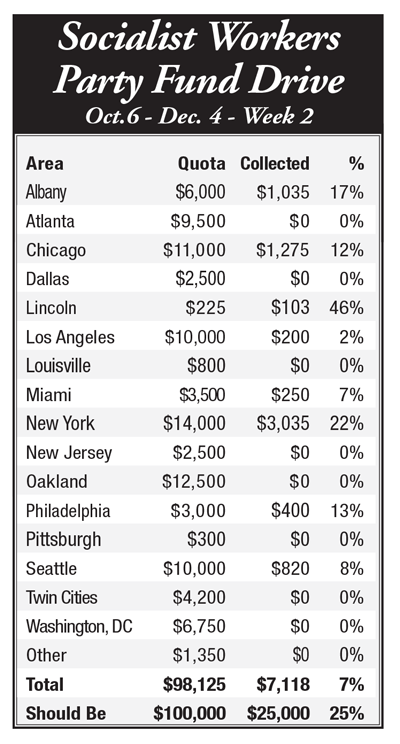