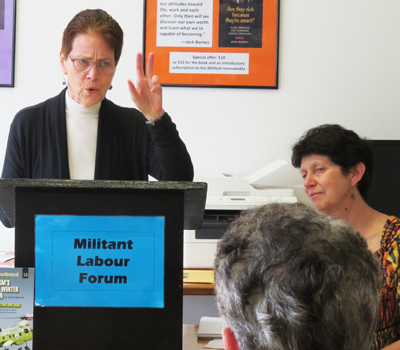 SYDNEY — “There is no better vantage point than here in Australia and New Zealand to verify that what is unfolding today are the biggest political ruptures in the capitalist world order that those of us sitting in this hall have seen in our lifetimes,” said Socialist Workers Party leader Mary-Alice Waters, at Militant Labor Forums in Auckland, New Zealand, Oct. 19 and here Oct. 21.

“Nowhere is it more apparent than in the Asia-Pacific region that the entire post-World War II imperialist order put in place by Washington and its allies 70 years ago is not just fraying at the edges.” Waters said. “It is being pulled apart at the seams.”

The vast, interlocking web of “multilateral treaties, trade pacts, military alliances, and all the supposedly supranational creations, like the European Union and the World Trade Organization, are being rendered asunder” by the workings of capitalism itself, she said.

Waters noted that we’re seeing the consequences of intensified capitalist competition as new powers flex their muscles, and inter-imperialist rivalries sharpen. Underlying it all, Waters said, is the “four-decades-long declining average rate of profit” accompanied by the inevitable financial crises that are the product of growing mountains of fictitious capital based on debt.

“Some of the greatest changes that are being registered,” the SWP leader said, “include the development of capitalism in parts of Africa, Asia and Latin America that existed largely outside the world capitalist market at the end of World War II, and the rise of rival capitalist powers in the last quarter century, such as Russia, and especially China.

“What is shattering,” she said, “is the liberal capitalists’ delusion that there exists such a thing as a ‘rules-based international order’ that will regulate the competition of capital and guarantee peaceful coexistence for all time.”

While noting that mold-shattering events were occurring in other regions of the world as well — especially across the Mideast and the European continent — Waters focused her remarks on the growing rivalry between Washington and Beijing, and the growing nervousness — and divisions — in Australian and New Zealand ruling circles over the consequences for them.

‘Between rock and a hard place’

These more adversarial relations are seen and written about here with “a degree of insight born of deep trepidation,” Waters said. “Both Canberra and Wellington are between a rock and a hard place.” The U.S. remains their main strategic military ally — World War II has not faded from memory. Yet China is the major trading partner of both countries, and Chinese capital has growing weight in their economies.

Waters quoted former Australian Prime Minister Kevin Rudd, who said, “History will mark this year [2018] as a profound turning point in the relations between the two great powers of the 21st century — the United States and China.”

Rudd was commenting on an Oct. 4 speech by U.S. Vice-President Mike Pence at the Hudson Institute in Washington, cataloging an extensive list of Washington’s major charges against Beijing — from industrial espionage to human rights violations to its military buildup in the South China Sea — that are offered up as justification for the sharpening trade conflicts between the two powers. While Pence’s speech received little more than passing attention in the U.S. press, it was viewed with some alarm in the southwest Pacific.

Many linked Pence’s speech to comments by President Donald Trump. “When I came we were heading in a certain direction that was going to allow China to be bigger than us in a very short period of time,” Trump said at an August campaign rally in Charleston, West Virginia. “That’s not going to happen anymore.”

Despite the common view that the conflict between Washington and Beijing is primarily a matter of a trade imbalance, Waters noted, the biggest issue for the U.S. rulers is, as they say openly, the question of national security. Trade is Washington’s strong suit and the weapon of tariffs is being used by Washington in much bigger conflicts over “who controls the next generation of technology including artificial intelligence, domination of semiconductor production and the supply chains vital to U.S. industry and the military.”

Trump’s claim that he’ll bring back the factories and production that U.S. capitalists have moved to Asia and elsewhere in search of cheaper labor, Waters explained, “is not about concern for workers who have lost jobs. It’s above all about the productive infrastructure needed by the U.S. imperialist rulers to maintain their military domination. Industries like auto, steel, oil, aerospace, shipbuilding, telecommunications and electronics are all vital for what they like to call ‘national security.’”

Australian Treasurer Josh Frydenberg announced the first week of November his intention to stop Hong Kong company CKI bidding $13 billion to acquire Australian infrastructure business APA Group, which controls over half the national pipelines. If the purchase had gone through it would have put 100 percent of electricity and gas transmission assets in major parts of the country in the control of Chinese companies.

The expansion of Chinese territorial claims and military fortifications in the South China Sea has revived memories within U.S. and Australian imperialist circles about the last world war. In 1942 the armed forces of rival Japan penetrated even further south, within a few miles of the tip of Australia, in the inter-imperialist conflict over the colonial spoils of the Pacific. All this lies behind the determination of the Australian capitalist rulers to secure their strategic alliance with Washington at all costs.

The New Zealand press picked up on another aspect of the international shifts that deeply concerns bourgeois interests there. Waters quoted an opinion piece by Jane Kelsey in the New Zealand Herald expressing alarm over a provision in the new U.S.-Mexico-Canada Agreement that the author says requires “any party that negotiates a [so-called] free trade agreement with a non-market country — meaning China — must disclose that fact, along with draft texts, and the other parties can kick it out of the USMCA.”

If this provision is repeated in other agreements, Kelsey wrote, “countries will be forced to choose China or the US,” posing “a huge challenge for Australia, New Zealand and many others.”

Waters noted that similar forces are tearing apart capitalist trade alliances elsewhere around the world. This is precisely what the Brexit battle is all about.

Widening class divisions in the U.S.

Turning to the U.S., Waters told the audience, “You’ll never understand anything about what is happening in the class struggle there unless you get your eyes off of Trump!” That’s not easy, she noted, given the liberal media’s hysteria over the president. But Henry Kissinger’s assessment of Trump is more accurate, she noted. “Trump may be one of those figures in history who appears from time to time to mark the end of an era and to force it to give up its old pretenses,” Kissinger told the Financial Times.

And the next two sentences, Waters added, are just as important. “It doesn’t necessarily mean that he knows this, or that he is considering any great alternative,” Kissinger said. “It could just be an accident.”

“That’s because neither Trump nor any other capitalist politician has any great alternative,” Waters said. “For their class, there is none!”

The economic, social and political gap between the working class and the highly paid layers of the middle class in the U.S. has accelerated in the last two years, and that’s what every political battle there is an expression of. “The real cause of the liberals’ fury and determination to establish the illegitimacy, the unconstitutionality, of the Trump presidency is their contempt for the toilers of all races who voted for him, whatever the reason,” Waters said.

“They don’t think such people, who candidate Hillary Clinton labeled a ‘basket of deplorables,’ should be able to interfere in what they consider to be the political and social prerogatives of the privileged social layers they speak for,” she said. “They want changes in the Constitution that would limit what New York Times columnist Charles Blow claimed was a ‘plan by conservatives to fundamentally change the American political structure so that it enshrines and protects white male power.’”

At the same time, she noted, the most important labor battle in the U.S. in decades was hardly reported by the major capitalist media. “In the state of West Virginia, where Trump had won 68 percent of the vote in 2016, 35,000 teachers, supported by a social movement of tens of thousands of others from the families, schools, unions, churches and community centers, carried out a statewide strike, which inspired workers across the country,” she said. “They occupied the state capital for nine days straight until they won a 5 percent wage increase for every state employee.

“For the first time in years this class battle revealed the nascent power of the working class,” Waters said. “It marked the end of a long dry spell in the class struggle. One more registration of enormous pressures that are building across the globe.”

The SWP leader concluded by describing recent book fairs from Manila in the Philippines to Erbil in Iraqi Kurdistan and the thirst encountered at these events for discussion of revolutionary perspectives and literature that makes available the cumulative lessons of more than a century and a half of struggles by the working class.

Waters talked about steps taken by the Socialist Workers Party and the Communist Leagues in Australia and New Zealand to respond to these momentous shifts in world politics. They have posed fresh opportunities as well as new and welcome challenges for the vanguard of the workers movement internationally.