The Socialist Workers Party ran 19 candidates for U.S. Senate, governorships and other offices across the country in the 2018 midterm elections, speaking out against the capitalist rulers’ attacks on workers, farmers and others. They explained that workers need to build unions, fight to unify working people in struggle, and chart a working-class course to take political power into their own hands.

SWP candidates spoke at Militant Labor Forums across the country on the Nov. 9-10 weekend to discuss what the election results registered, the response of workers to the SWP campaign, and the party’s plans to continue advancing its working-class program and activities.

“Few workers were excited about either the Democrats or Republicans. They didn’t see them presenting any answers for the working class,” Róger Calero, SWP candidate for New York governor, said Nov. 10 when he spoke in New York City along with Vivian Sahner, SWP candidate for U.S. Senate in New Jersey.

“We got a serious hearing and discussion when we explained that workers need to join in backing each other in every strike or battle we get involved in. Solidarity in struggle is the path to unifying working people on the road to independent working-class political action.

“The elections took place as the imperialist ‘world order,’ put together by the U.S. capitalist rulers after they emerged victorious from the second imperialist world war, is coming apart,” Calero said. “We are seeing changes taking place like nothing we’ve ever seen in our lives. And this is deepening the crisis of capitalism workers see affecting them.”

There was a lot made by the liberal press of the number of “socialists” and members of Democratic Socialists of America who ran — and a few who got elected — on the Democratic Party ticket, Calero said. “This wasn’t some new breakthrough for ‘socialism,’” he said. “It is an effort to keep workers looking for a way forward enmeshed in the rulers’ two-party swamp.”

The forum featured a lively discussion that took up political developments in the U.S. and the world, including whether there is a rise in Jew-hatred among working people today, and the importance of the labor movement taking up the fight for amnesty for immigrant workers in the U.S.

“The election took place in the middle of the party’s drive to get 1,400 Militant subscribers, sell 1,400 books by SWP leaders, and raise $100,000 for the work of the party,” Calero said. “We look forward to continuing this effort, joining workers in their actions and knocking on doors across the country.”

The eight-week drive by the SWP and Communist Leagues in Australia, Canada, New Zealand and the U.K. will continue through Dec. 4. The books on special offer are featured in an ad on this page.

Carole Lesnick, who ran as the SWP candidate for U.S. House of Representatives in Oakland, California, talked with workers on their doorsteps in Hayward Nov. 11. Cecilia Martinez, a single mother of two, liked what she had to say.

Lesnick told her that she is building support for striking workers at seven Marriott hotels in San Francisco. She showed Martinez her “One job should be enough! UNITE HERE” button. The strike is now in its sixth week and picket lines are spirited, Lesnick said.

Martinez said she had to “work like a burro” to clean houses in the area and has to struggle to pay her bills. When some people learn their cleaners don’t have papers, she said, “they don’t pay the minimum wage. They just pay what they feel like.”

Lesnick gave out a statement, “Amnesty for Immigrants! Unite, Organize All Workers!” that she and other SWP candidates in California released in October. “There are more that 11 million immigrant workers without ‘proper’ documents,” the statement said. “Our party, the SWP, campaigns for the unions to fight for amnesty for all of them. …

“This is a life and death question to unite the labor movement,” it stated.

Martinez got a copy of the Militant and asked Lesnick to come back soon for more discussion and to give her time to get money together to get a subscription.

Ned Measel, who ran as the SWP candidate for District of Columbia delegate to the House of Representatives, and fellow SWP members traveled to West Virginia Nov. 10-11 to knock on workers’ doors. In Grafton,  Measel told army veteran Wesley Robertson that Washington sends young people to fight wars that serve the capitalist rulers’ interests. The SWP campaigns for withdrawal of U.S. troops from Iraq, Afghanistan, Korea and elsewhere around the world.

Robertson said he joined the army at 17, believing the recruiters who told him he would be fighting for peoples’ freedom. “We just never questioned it,” he said.

But he said he changed his mind because of his experiences while deployed to Iraq and Kuwait for six years, and because of what he learned about the U.S. internment of Japanese during World War II. “I learned it wasn’t about freedom,” he said.

Since getting out of the army in 2015, he has tried to earn a living working in gas stations and as a telemarketer and is struggling. He signed up for a Militant subscription, and said he wanted to get together again and get some of the books party members brought. “Call me up!” he said.

She told them about being part of a union-organizing effort last year, and they told her about how they had supported union nurses and hotel workers in the region. She subscribed to the Militant and bought Is Socialist Revolution in the US Possible? by SWP leader Mary-Alice Waters.

Bentley invited Martínez and Hernández to a barbecue a month later. They discussed union struggles and the Cuban Revolution, which Martínez admires, and how the party campaigns to get out the truth about its example for workers.

Martínez pledged $30 to the SWP fund.

“I want to help a movement that sows hope and optimism among workers trying to fight for their rights,” she said.

If you want to join in solidarity actions, in distributing the Militant and books on special, or to contribute to the SWP fund, contact the SWP or Communist League branch nearest you, listed in the directory. 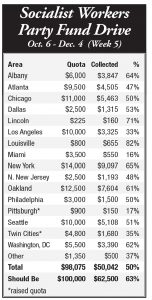 US troops out of Korea, Middle East, Afghanistan!

Under Democratic and Republican presidents alike, the U.S. government has been embroiled virtually nonstop in wars to defend U.S. capitalist interests for the last 28 years. The 1990-91 Gulf War and ensuing combat that went on and off through this…