Opposition to ongoing Florida prison censorship is growing after the system’s Literature Review Committee at the end of October upheld a ban on the Sept. 17 issue of the Militant. Several groups have sent letters urging prison officials to lift the ban. Other organizations that defend freedom of the press and the right to read say they are preparing responses to this violation of the constitutional rights of both the socialist newsweekly and its subscribers behind bars.

“None of the articles within this issue advocate for physical violence or group disruption,” wrote Justin Mazzola, deputy director of research at Amnesty International USA, Nov. 2. “nor do they seek to incite rioting, insurrection, disruption of the institution or the violation of department of institution rules. The act of informing subscribers about events of the outside world in and of itself and without more should not be means to violate prisoners’ freedom of expression.”

He urged the Literature Review Committee to “end the arbitrary impoundment of future issues … so that subscribers may maintain their connection to the outside world.”

The committee’s decision to uphold the impoundment of the Sept. 17 Militant is the sixth time in the last two years they’ve done so, without one word of explanation. The committee has also overturned at least 13 other attempts by prison wardens to ban the paper. 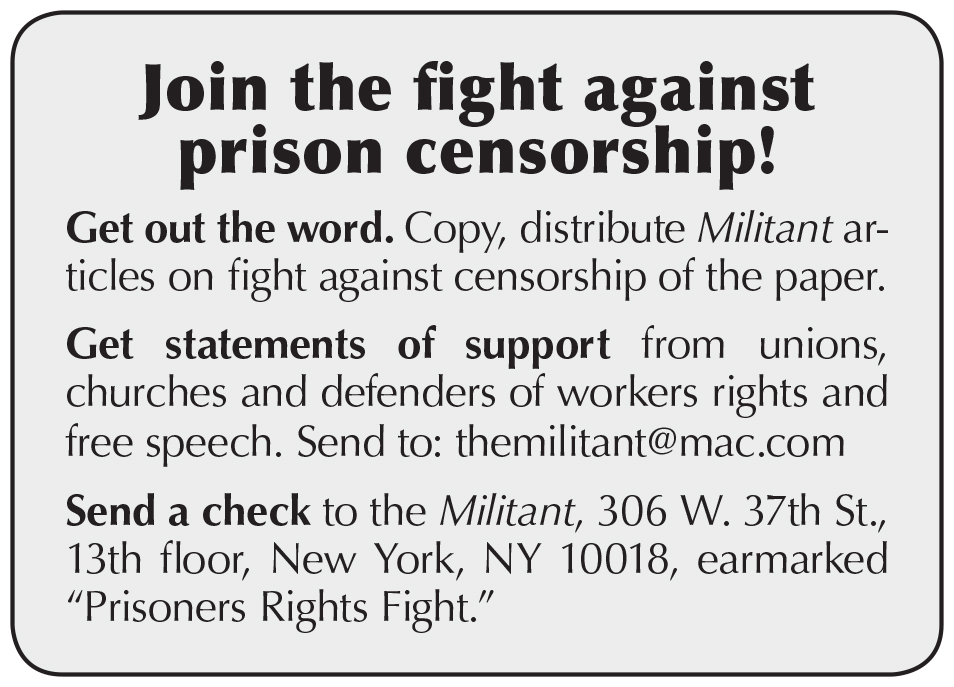 In Florida, if one prison impounds the paper, every prison in the state follows suit. Over the last two years the number of impoundments has increased. In Florida prisons this “appears to be part of an ongoing targeting” of the Militant, the paper’s lawyer, David Goldstein, of the Rabinowitz, Boudin, Standard, Krinsky and Lieberman civil rights law firm, wrote in his appeal of the latest impoundment.

These bans are “four times as many as in the entire rest of the nation, state and federal prisons combined, in the past decade,” he wrote.

“Now is a good time for readers of the Militant and other defenders of political rights to join the fight to push back censorship in Florida,” John Studer, editor of the Militant, said Nov. 13. “The overwhelming passage of an amendment that restored voting rights in Florida to more than a million workers who had served time on felony convictions is one indication of the depth of support for the rights of workers who’ve been thrown behind bars.”

“Working people don’t like repression and censorship, or what the Constitution calls ‘cruel and unusual punishment,’” Studer said. “They don’t agree with prison officials banning newspapers and books.”

That’s why government attempts to restrict books in New York and Maryland were overturned, and why protests against new rules by Pennsylvania prison authorities restricting inmates’ access to letters, books and periodicals forced them to back off from some of them, Studer said.

Florida officials claimed that an article on solitary confinement in California and one on the hunger strike of Crimean film director Oleg Sentsov — framed up by the Vladimir Putin regime in Russia and imprisoned in Siberia — could cause “violence” and “insurrection.”

“Neither subject matter invokes violence, but rather seeks to present important national and international events which are pertinent to the lives of their readership,” wrote Karin Deutsch Karlekar, director of Free Expression at Risk Programs at PEN America. “Prisoners have a right to read the Militant’s reports of current prison conditions and protests around the globe.”

Join the fight against censorship! Bring this free speech fight to co-workers, union officials, workers on strike, church groups and others. Many will welcome the opportunity to offer solidarity to fellow workers behind bars and write a letter.